20 Tragic Photos from America's Dust Bowl in the 1930s 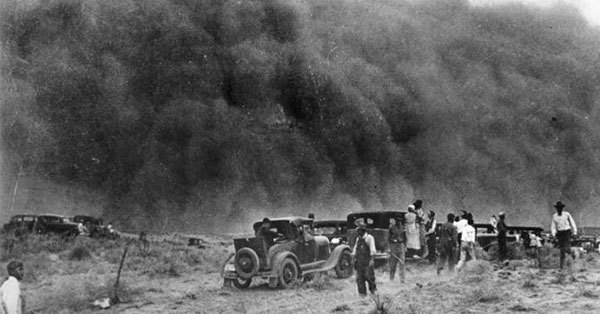 20 Tragic Photos from America’s Dust Bowl in the 1930s

The Dust Bowl was a series severe dust storms that affected 100,000,000 acres of the American prairie caused by drought and poor farming techniques. Drought plagued the Mid-West from 1934 to 1940. In order to plant crops, farmers removed the deep-rooted grasses which kept the soil moist during periods of little rain and high wind. The dehydration of the soil was exacerbated by more astringent farming techniques from newly developed mechanized farming machinery such as the tractor and combine.

The Federal Government encouraged settlement and development of the Mid-West. The Homestead Act of 1862, the Kinkaid Act of 1904, and the Enlarged Homestead Act of 1909 offered large tracts of land to settlers willing to move to the Great Plains. After an unusually wet and fertile season in the 1920s the government and climate scientists propagated the theory that ‘rain follows the plow’ in order to speed migration west. This theory states that human habitation and agricultural development permanently changes the climate in arid regions, making them more humid.

During the drought, the exposed, plowed soil blew away in huge dust clouds called ‘black blizzards’ or ‘black rollers’. On May 9, 1934 there was a storm so severe that 12 million pounds of dust was deposited in Chicago. The black blizzards would reduce visibility to less than 3 feet and storms could sometimes send dust clouds as far east as Washington DC and New York City. In the winter of 1934-1935, the snow in New England was red.

Families across the prairie were displaced by the drought and storms. Between 1930 and 1940 3.5 million people moved out of the Plains states, most of whom went to California.