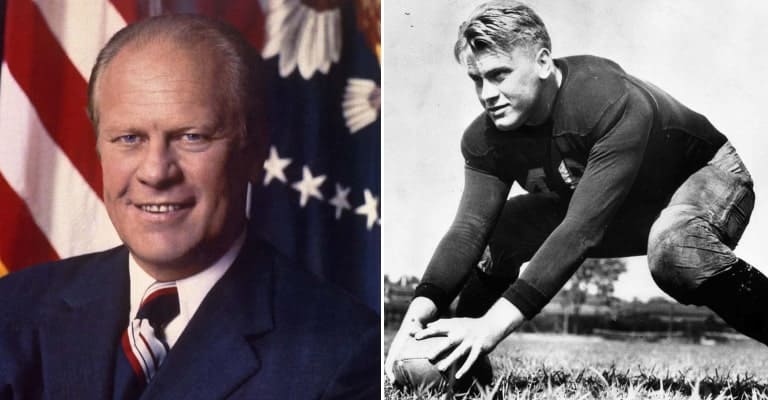 Ford was the first man to enter the Oval Office as President without having been elected as either president or vice president. His presidency followed one of the nation’s greatest political scandals, and was controversial from the start. After he pardoned Richard Nixon cries of a corrupt deal were loud and long. Ford found solace in participating in sports. He made frequent use of the White House swimming pool, as well as the pool installed by Nixon at Camp David. He also played tennis and golf and made several skiing trips during his short tenure in office. Ford was also an avid reader.

For relaxation, while in the White House residence, Ford was another stamp collector, though his collection was never as extensive as FDR’s, and he did not dedicate as much time to the hobby as his predecessor had. He played bridge, as well as other card games, and collected pipes, which he smoked throughout his presidency. To date, he was the last pipe smoker to occupy the White House. Ford was a gifted athlete, though some poorly timed falls during his presidency left many with the impression that he was clumsy. He enjoyed ballroom dancing, which is a clear indication that he was anything but.

“Abraham Lincoln Is the Only President Ever to Have a Patent”. Owen Edwards, Smithsonian Magazine. October 2006

“Whatever happened to the Presidential Yacht?” Oliver Sharpe, Town and Country Magazine. July 17, 2017