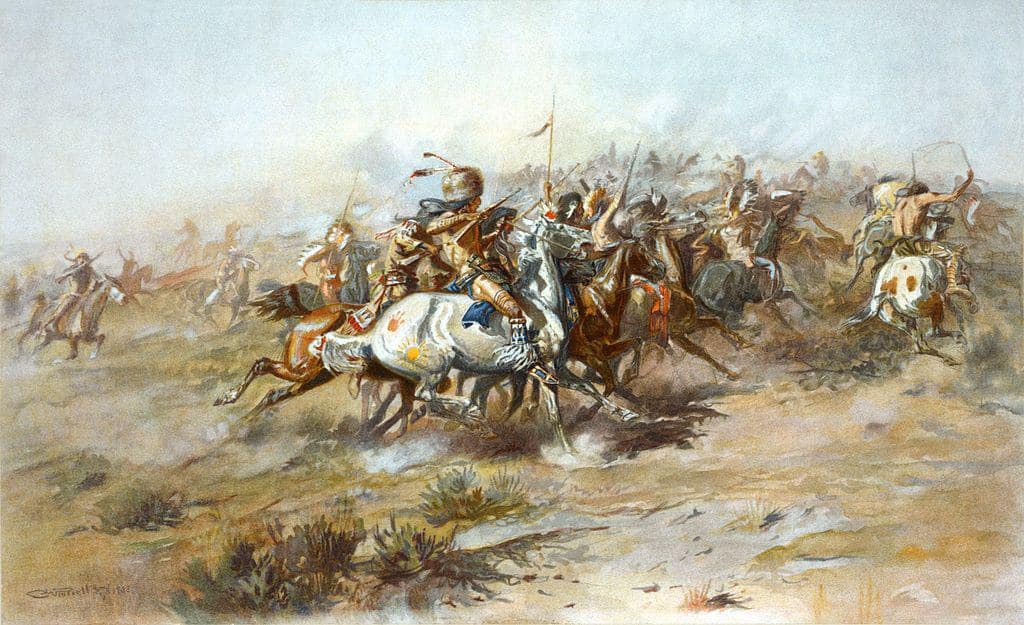 Since the first Europeans reached North America and began a policy of expansion westward, there have been conflicts over lands and rights with Native American populations already living in these areas. Largely, better access to arms and resources has led to deplorable conditions for Native populations; however, amidst these battles and conflicts, there have been a number of strong and resourceful leaders and heroes.

Dragging Canoe (1738 to 1792) was a Cherokee war leader fighting colonists in the Upper South. From 1777 onward, Dragging Canoe was the war chief of the Chickamauga Cherokee or Lower Cherokee. He worked with other tribes and British loyalists during the Revolutionary War and continued to fight to preserve the land and rights of the Cherokee.

When Dragging Canoe was only an infant, he and his mother were captured and assimilated into the Cherokee tribe. These assimilations were relatively common, and had no impact on his status among the Cherokee. Raised with the Overhill Cherokee, Dragging Canoe earned his name when he, as a boy, was allowed to join a war party if he could carry his canoe; however, he could only drag it.

Between 1759 and 1761, Dragging Canoe fought in the Anglo-Cherokee war and became the head man of a Cherokee town on the Little Tennessee River. The Cherokee allied with the British during the American Revolution, and Dragging Canoe fought a number of successful battles, gaining and even reclaiming land from colonists.

Following the American Revolution, Dragging Canoe continued to fight with colonists to maintain Cherokee control of their lands, but was less successful, being forced to resettle his people on more than one occasion. After the destruction of a number of Cherokee towns during the Revolutionary War, Dragging Canoe moved his people to settlements in the area of modern-day Chattanooga. These settlements gave the group the name the Chickamauga Cherokee, for the nearby Chickamauga Creek. Later, the group moved further downriver, creating a number of new settlements.

He navigated successful alliances with other tribes in the area, including the Muskogee and the Choctaw. Dragging Canoe died of exhaustion or perhaps a heart attack after a night spent dancing to celebrate the success of this alliance.

Tecumseh (March 1768 to October 5, 1813) was a leader of the Shawnee, and the Tecumseh Confederacy, a large alliance of tribes opposed to the United States. Tecumseh grew up during wartime; experiencing both the Revolutionary War and the Northwest Indian War. His father was killed while he was still a boy, and by 15, he joined a band of young men working to stop traffic on the Ohio River.

As a young man, Tecumseh fought in the Northwest Indian War, meeting Dragging Canoe as the tribes joined together to ally themselves against U.S. forces. When the Northwest Indian War came to an end in the 1790s, Tecumseh refused to sign the treaty. Many of the other leaders of various tribes, including Black Foot, who led many of the Shawnee signed, accepting both the limitations proposed by the U.S. and the ideology of assimilation.

By 1805, Tecumseh was one of the leaders of a group of Shawnee that were, he said, committed to a move further westward, but in direct opposition to ideas of assimilation. This was driven by the religious spirit and action of Tecumseh’s younger brother, Tenskwatawa. Tecumseh and others went on to found Prophetstown.

Within just a few years, Tecumseh was traveling through different tribes and Native American communities, encouraging them to maintain their holds on land and reject accommodation and assimilation.

In 1810, with growing support, Tecumseh gathered a group of 400 warriors and set out for the residence of the governor of Indiana, William Henry Harris. Violence was narrowly averted, and Tecumseh met with the governor on several occasions. Tecumseh began to work actively with other tribes to form a Pan-Indian alliance of tribes and was successful.

During the War of 1812, Tecumseh’s Confederacy fought alongside the British, and the British later attempted to provide lands to Native Americans to create a buffer zone. Tecumseh died in battle on October 5, 1813. Later, Colonel Richard Johnson claimed he had killed Tecumseh; however, this allegation may not be true. Both Tecumseh’s efforts and those of the British were unsuccessful, and the U.S. did not maintain the treaties set in the War of 1812.

Geronimo (June 16, 1829, to February 17, 1909) was an important leader of the Bedonkohe band of the Chiricahua Apache. Active in the Apache-American conflict, Geronimo was part of a number of small raids in Northern Mexico and the American Southwest. The conflict began after the end of the Mexican-American War in 1848, and Geronimo was active in it between 1850 and 1866.

The primary Apache defense strategy during these years of conflict was relatively small-scale raids. These raids served military and strategic purpose, but also an economic one. These raids varied dramatically, from the theft of livestock and supplies to the taking of human captives. European settlers responded with equal violence on a regular basis.

Geronimo was not well-liked among his own people. He did not lead a tribe, nor was he a war chief. He was a successful leader of a raiding band, and typically had between 30 and 50 direct followers. Many Apache who knew him believed he had supernatural gifts, including the ability to see the future.

Between 1876 and 1886, Geronimo accepted U.S. terms, and made his home on the Apache reservation. This was in direct opposition to traditional ways of life for the Apache, and illness was prevalent. He left the reservation and resumed raiding several times during these years. In 1886, Geronimo again surrendered and was resettled to Oklahoma, where he began farming.

In 1898, Geronimo attended the Trans-Mississippi International Exposition, and was a star attraction. He continued in this public role until his death; however, he remained, legally, a prisoner-of-war, even meeting with President Theodore Roosevelt to request an end to that status for himself and other Apaches. This request was denied. Geronimo was still a prisoner-of-war at the time of his death in 1909 at Fort Sill, Oklahoma.

Sitting Bull (1831 to1890) was a Sioux chief who united the Sioux tribes to resist the westward push of the United States government. Prior to 1874, conflicts with the Sioux were relatively uncommon; the United States had little interest in the Dakotas; however, that changed with the discovery of gold in 1874, leading to the Great Sioux Wars.

Sitting Bull was recognized as a warrior while still a young man, in conflicts with the Crow and other tribes, but he did not encounter whites before 1862. The white population in modern-day South Dakota was quite small, and Sitting Bull was not near a transit route used by those moving west. When the Santee Sioux left their reservation in Minnesota and moved into the Dakotas, Sitting Bull learned of life on the reservation and the goals of the United States.

By 1864, Sitting Bull had developed a clear position of resistance to U.S. efforts to move the Sioux to reservations, and had engaged U.S. forces. Sitting Bull’s resistance to the U.S. and reservations gained him allies among other tribes, including the Arapahoe and Cheyenne. During the years that followed, he engaged in skirmishes with General Armstrong Custer.

Sitting Bull was not a war chief at Little Bighorn, but had predicted conditions of the battle. Following Little Bighorn, Sitting Bull fled to Canada. He returned and surrendered in 1881, spending several years on a Sioux reservation and traveling with Buffalo Bill’s Wild West Show. Sitting Bull died in an arrest attempt in 1890, after he refused to stop the Ghost Dance, a religious movement that believed whites would die and Native Americans, including the dead, rise, on the Standing Rock reservation.

Crazy Horse (Around 1842-September 5, 1877) was a contemporary of Sitting Bull, and worked closely with him in the battle for Sioux independence and the resistance against U.S. forces. Part of the Ogala Lakota tribe, Crazy Horse was largely responsible for the Sioux victory at Little Bighorn.

Both of Crazy Horse’s parents were Sioux, although from different tribes. His mother died when he was a small boy, and he was raised by his father and his new wives. As a boy, he witnessed the massacre of American troops by the Sioux in the Grattan massacre and began to experience spiritual visions. By adulthood, he was described as modest, quiet, and largely alone. He was kind and generous to those in need.

On December 21, 1866, Crazy Horse and several others led the Fetterman fight, called the Fetterman massacre by whites and the Battle of the Hundred in the Hand by the Sioux. U.S. forces were defeated by the combined efforts of the Lakota Sioux and Cheyenne in a decisive victory.

According to the military, Crazy Horse attempted to escape or resisted custody and was stabbed with a bayonet and died. There is some dispute about this story; however, his body was returned to his parents after his death.