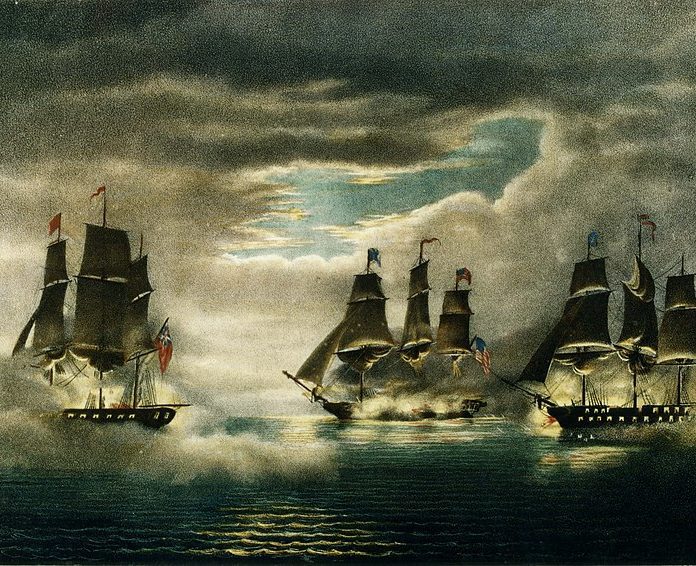 The War of 1812 was the first declared war in American history. Its causes were many, including British arming of the Indians in the Northwest Territory, which it had ceded to the United States in the Treaty of Paris which ended the American Revolutionary War. In 1812 Britain’s war against Napoleon was at its peak, and British ships were blockading trade with the European continent, excluding American ships from entering the ports of nations dominated by the French emperor. The United States argued that the British blockade was illegal. The British had also for years stopped American ships and seized sailors that they claimed were British citizens.

War Hawks emerged in Congress, demanding the removal of the British from all of North America. Since British Canada provided much of the timber used to build British warships England had no intention of abandoning it to the Americans. New England merchants and politicians largely opposed the idea of war with the British over Canada, since it would impede the brisk trade between the growing American merchant fleet and the British, including food and grain being sent to feed the British Army under Wellington in Spain. That trade continued even as the United States fought the war, via the British Naval port at Halifax.

Here are some of the causes and events of the War of 1812, a conflict which established the United States as the dominant nation on the North American continent.

Between 1783 and the early 1800s the American merchant fleet grew exponentially. During the Napoleonic Wars the British Privy Council enacted what were called the Orders in Council, imposing restrictions on trade between neutral nations and the European continent. Neutral ships were ordered to enter British ports to have their cargoes inspected prior to entering European waters. Any ship which did not comply was subject to seizure by blockading British ships. To make matters worse, Napoleon responded with the Milan Decree, which labeled any ship entering a British port a British ship, subject to seizure by French authorities when it entered a French port.

The Orders in Council were actually a series of decrees over several years, which grew increasingly draconian regarding the cargoes which were considered to be war materials with each succeeding order. The United States protested them as illegal. At the same time the closure of the European ports and markets increased American trade with Great Britain, with more and more goods from America arriving in American, rather than British ships. The British maritime and mercantile interests grew resentful of the growth of America’s growing merchant fleet.

The Royal Navy also restricted the British merchant fleet by stripping ships of the men to crew them. In order to avoid the press gangs which seized British mariners and landsmen and force them into warships, many English sailors signed on to American merchant crews. British law did not allow them to renounce British citizenship, even after acquiring American citizenship. This extended to those born in any British possession, including Canada. The Royal Navy reserved to itself the right to stop any neutral ship on the high seas and inspect its crew, taking anyone it decided was a British citizen. The United States protested this activity as illegal as well.

British arrogance towards the United States regarding trade and the seizing of Americans created a groundswell of anger in the United States, which increased as encounters at sea were extended to American warships. In 1804 the British began patrolling outside New York Harbor, stopping all ships they sighted just outside the then claimed three mile territorial limit and inspecting their cargoes and seizing sailors. In 1807 HMS Leopard, searching for British deserters, fired into USS Chesapeake after it failed to comply with British demands to stop and be boarded, killing three and wounding 18. The British then seized four “deserters”, three of which were Americans.

In 1811, British seizure of an American citizen after stopping an American ship on the high seas led to USS President pursuing what its commander, Commodore John Rodgers, thought was the offending British ship, HMS Guerriere. It turned out to be the British sloop of war HMS Little Belt. President and Little Belt fought a night engagement in which both sides claimed the other side fired first, and which left Little Belt badly damaged. The following year, increased resistance by British merchants and industry led to the Orders in Council being revoked by Lord Liverpool. On June 23, 1812 the orders were revoked. The United States had declared war five days earlier.