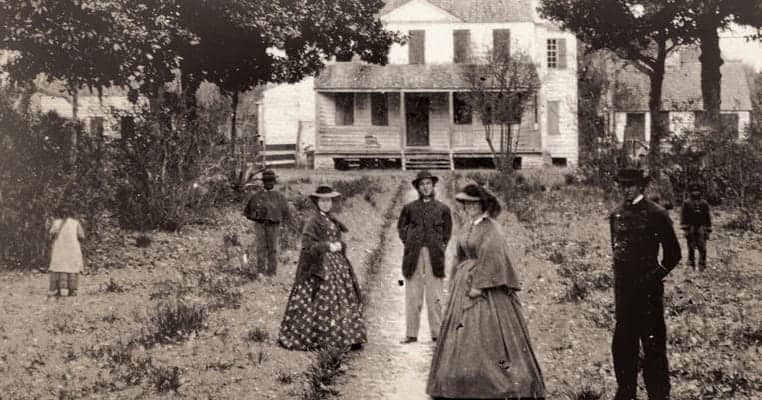 After Julia married the president, many people started to see her in a different light. The upper-class women that once despised the way Julia acted began to believe she settled down and started to treat her with more respect. However, not everyone felt this way. John Tyler’s children couldn’t stand their new mother.

Tyler, who had told his children he wouldn’t remarry, viewed the quick marriage as a slap in the face to their mother. While the two youngest daughters, Mary and Elizabeth, started to like their new stepmom, the oldest daughter, Letitia, never cared for her.

One factor about Julia Tyler that people understand when they get to know her is that she had a lot of self-confidence. However, much of her confidence was unrealistic. Julia didn’t just think she was one of the most beautiful women in America; she knew this as a fact. She also stated this as a fact.

Julia cared deeply about her looks, just like most high society women during the 1800s. But, many historians believe that Julia’s self-image became so unrealistic that she showed signs of Narcissistic Personality Disorder.

17. Many People Believed Julia Was A Flirt

Women needed to act reserved in 1800s America. They couldn’t ask a man out; a mad needed to court them. While a woman could flirt, it wasn’t something that people taught them to do. Women of upper society shouldn’t flirt as this was something that women in lower social classes did.

But, Julia never let this social class stop her from doing anything, including flirting. As a beautiful high-class woman, Julia loved the recognition she received from various men – and she had no problem returning the attention.

Julia, who lived through the Civil War, defended slavery during the 1850s when she wrote “The Women of England vs. the Women of America.” Julia wrote this title in response to the “Stafford House Address,” which petitioned against slavery.

While many abolitionists became angry with Julia’s work, the person who made her frustration well-known was Harriet Jacobs. Born a slave, Jacobs understood slavery firsthand and wrote an essay that she published in the New York Tribune in response to Julia’s piece.

Because Julia’s father had a senator’s seat, President John Tyler invited the whole family to dinner at the White House. During this visit, Julia became interested in John Tyler, Jr., who flirted with Julia. Even though Tyler Jr. had a family of his own, he planned to divorce his wife for Julia.

Once the plans started to get underway for the divorce, Julia’s relationship began to change with the elder John Tyler. After the death of his wife, President Tyler started to secure a relationship with Julia, who began to feel a bit forced into the relationship.

When President John Tyler first met Julia, his first wife was alive and well. Unfortunately, a few months later, Tyler’s wife passed away, and he quickly turned to Julia as his next interest. While Julia remained more interested in John Tyler Jr., at that moment, this feeling suddenly changed.

Before people knew it, President Tyler started courting the 21-year-old Julia. While he was about 30 years older than Julia, the courtship turned into a proposal during one of the dance balls at the White House. Many historians believe Julia’s mother pressured her to marry President Tyler.

13. Julia Lived Through The Explosion Where She Lost Her Father

Before Tyler proposed to Julia, the couple boarded the Princeton ship with Julia’s father and sister. During the voyage, the naval gun on board the vessel, known as the Peacemaker, exploded, killing several members on board. While President Tyler, Julia, and her sister lived through the accidental explosion, Julia’s father died.

The explosion and the loss of her father, whom she adored, devastated Julia. President Tyler did what he could to comfort Julia, which drew the couple a bit closer. In fact, some people believe that Julia decided to accept Tyler’s proposal for marriage a few months later because of his support after the explosion.

12. Julia Always Made A Grand Entrance

Julia Tyler became known for many scandals during her lifetime, and one reason for this is because of how she treated herself. She needed to make sure that she had a grand entrance because, well, no one was as beautiful as Julia. Therefore, everyone needed to know that she came to the event.

Julia rode around town in a coach with eight Arabian horses. She also imported an Italian Greyhound for her first stroll as First Lady. Sometimes Julia showed up late to significant events, such as the ship christening at the Naval Yard to ensure people talked about her entrance.

11. Julia Enjoyed The Company Of Men

Julia is known as a social butterfly, especially when it comes to men. Even when her reputation started to take a turn for the worst, at least according to 19th-century society, Julia never struggled to find a suitor – or a few. Some of the men she found herself in a relationship with included a Belgian count, future president James Buchanan, and a German baron.

Julia, along with her sister Margaret, brought men over to their home so often that their father needed to rent an extra room for their entertainment. Of course, this didn’t help Julia’s social reputation, but this never seemed to bother her.

10. Julia Temporarily Lost All Her Money

Julia’s husband, John Tyler, died on January 18, 1862, right at the start of the Civil War. At the time, the family continued to live on their Virginia plantation and support the Confederacy. After John’s death, Julia needed to move herself and her children back to New York and live with her mother.

Julia tried to pick up the pieces of her life, but the Civil War made this tough for everyone. Without a penny to her name, Julia had to sell her Virginia home, but couldn’t keep any of the money due to her incredible debt.

9. Julia Struck A Deal With A New York Herald Reporter

Julia became tired of the newspapers saying nasty things about her. She wanted people to read something nice about her, but reporters only wrote about the gossip or social mistakes she made. Therefore, Julia took matters into her own hands and struck a deal with New York Herald reporter FW Thompson.

Julia told Thompson that he would receive exclusive access to all her social gathers if he did one thing – wrote excellent statements about her is the newspaper. Specifically, she told Thompson to write about how flawless she looked, dressed, and how well she partied. In his articles, Thompson started referring to Julia as “Presidentress” or “The President’s Bride.”

It seems that if Julia could break a rule, at least on the social spectrum, she did it. She never really showed any worry about what other people thought, especially people who just gossiped in high society.

While Julia enjoyed wearing big, fancy dresses, she didn’t worry about if the upper part lacked some fabric or if more skin showed than it should. She enjoyed the sleeveless dresses and didn’t worry about wearing a shawl, which made people look twice when she walked down the street. Julia also wore jewelry that didn’t always fit in her high society, but Julia never seemed to mind the looks of other women.

7. Julia Ghostwrote Articles In Newspapers About Her Beauty

Julia wasn’t a stranger to the papers in her area. Reporters sometimes followed her around so they could get the next story of this scandalous woman. Before she held the power of First Lady, Julia couldn’t say much to the reporters. In fact, she had to let them write what they wanted about her.

However, after she married the president, this all changed – at least for a short period of time, she held the position, which was under one year. One way Julia got the newspapers to say something nice about her is by writing articles under a different name. In these articles, she was usually wrong about her beauty.

Julia and John’s relationship received much criticism. Part of this is because of Julia’s history in the newspapers. The other part is because of their 30-year age difference. This might be the reason that the couple decided to elope when they married.

5. Society Had Mixed Feelings About President Tyler’s Marriage To Julia

There are many reasons why some people didn’t support President Tyler’s marriage to Julia. While some of this is because of Julia’s controversial past, another reason is because of the couple’s age difference. Julia was 30 years younger than her new husband. In fact, he had a daughter that was older than Julia.

Another reason many people scowled at their marriage was because of their reasoning. The couple stated that they quickly decided to get married in a small ceremony to help Julia through her grief after her father’s sudden death during the Peacemaker explosion.

While Julia couldn’t stay out of the public gossip pages before she married President Tyler, she seemed to get a better handle on how to act socially once she married. Many people speculate this happened because she made herself rather busy hosting balls and other events.

Living the fancy life wasn’t new to Julia, so moving into the White House didn’t bother her. What bothered her was the realization that she married a much older man, who never planned on becoming president. Julia had to use her energy to help her tired husband make it through the last year of his presidency.