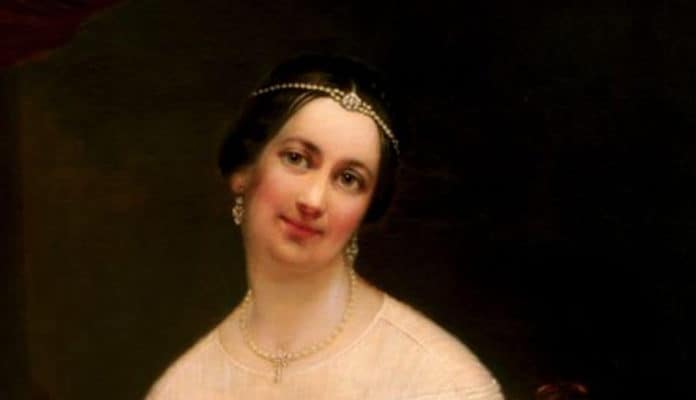 John Tyler served as the tenth President of the United States. However, he was only in office for 8 months. And those were 8 largely uneventful months. As such, Tyler remains one of the country’s lesser-known Presidents. But while he is often forgotten, his wife continues to fascinate. Julia Gardiner Tyler was the second-youngest First Lady in history. And, while she was only in the White House for less than a year, she made her mark in more ways than one.

As First Lady, for example, she changed Presidential protocol – and many of the changes she introduced are still in effect today. What’s more, she helped change how the country sees their First Lady. She was a public relations pioneer and a born entertainer. Moreover, Julia believed it was her duty to be more than a silent partner and she became actively involved in politics. At the same time, however, she was on the wrong side of history on more than one occasion, most notably due to her attitude to slavery.

So, from her privileged beginnings to her early disgrace and then from the glamor of the White House to near-poverty as a widow, here’s 20 things every history fan needs to know about the life and times of Julia Gardiner Tyler:

20. Julia’s was no rags-to-riches story; the future First Lady was born into the New York elite

Julia Gardiner, future First lady of the United States, was born into the New York elite on 4 May 1820. Her father, David Gardiner, had enjoyed a successful – and lucrative – career in law before going into politics. He served four one-year terms as New York State Senator whilst also overseeing several other business interests, including a substantial real estate portfolio. Julia’s mother, Juliana MacLachlan Gardiner, came from Dutch and Scottish immigrants to the United States, though she had been born in Jamaica.

Julia was the third of four children. She had two brothers and just one sister, Margaret, two years her junior. All of the children were born on Gardiners Island, which had been purchased by Lion Gardiner from the Montaukett chief Wyandanch back in 1639. To this day, Gardiners Island, the ancestral family home, remains the second-biggest privately-owned island in the whole of the United States. However, for most of Julia’s childhood, the family lived in the town of East Hampton and then the smaller, quaint hamlet of Bay Shore, a popular destination for wealthy New Yorkers escaping the big city on the weekends.