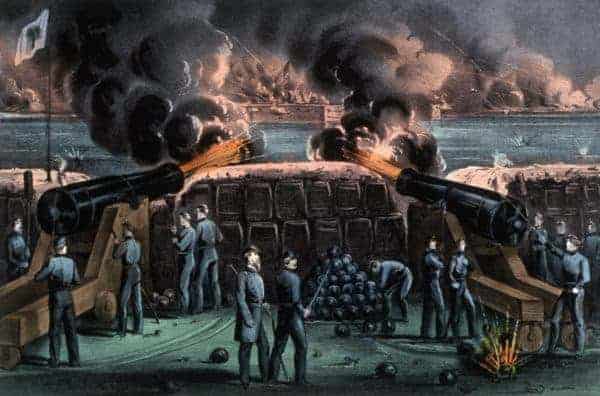 On April 12, 1861, the American Civil War officially began with the attack on Fort Sumter, South Carolina. The war was and remains one of the bloodiest civil wars ever fought in human history, resulting in more than 600,000 casualties.

Hostilities had been brewing between Southern state governments and the federal (Union) government for several years before the war officially began. There were several reasons for the hostilities, but the main reason was the issue of slavery in the United States. More specifically, the disagreements that took place before the violence broke out were over the legality of slavery in the expanding western territories.

As the United States grew in size (as it had since the early 1800s with the Louisiana Purchase), settlers branched out to the west, establishing territories and later states that would join the union. The federal government’s policy was for any new territory or state that was created to be anti-slavery.

The real issue here was that if those territories entered the union as free states and territories, that would affect their representation in congress, giving the free North much more power.

There were several political debates and compromises leading up to the Civil War. In 1820, the Missouri Compromise was passed, admitting Maine as a free state and Missouri as a slave state. It also mandated that any new territory or state above the 36′ / 30′ latitude line could only be admitted as a free state (with the exception of Missouri).

In 1850, after the war with Mexico concluded, new territories were added, which brought up the debate about the expansion of slavery once more. With the Compromise of 1850, which was championed by Henry Clay and Daniel Webster, California was admitted as a free state while New Mexico and Utah were allowed to decide for themselves.

This issue continued to be debated up until the Civil War began. Outside of politics, the much larger population of the free North continued to pressure Congress to abolish slavery on moral grounds. In 1854, violence broke out in Kansas between pro and anti-slavery settlers who were angered over another Congressional Act, one that repealed part of the Missouri Compromise (it allowed both Kansas and Nebraska to choose for themselves despite their location). The fighting even included members of Congress between 1856 and 1858, when brawls broke out over the debate to extend slavery to the western territories.

In the two years before the war, occasional violence would erupt and the debate over the issue of slavery intensified. The South saw their rights being trampled on by the North. It is this feeling that ultimately led to seven Southern states to secede in early 1861, and that would lead to the first real shots being fired on April 12 at Fort Sumter.

The war would rage for four years, and would cost at least 600,000 people their lives. It remains to this day the bloodiest war in American history.