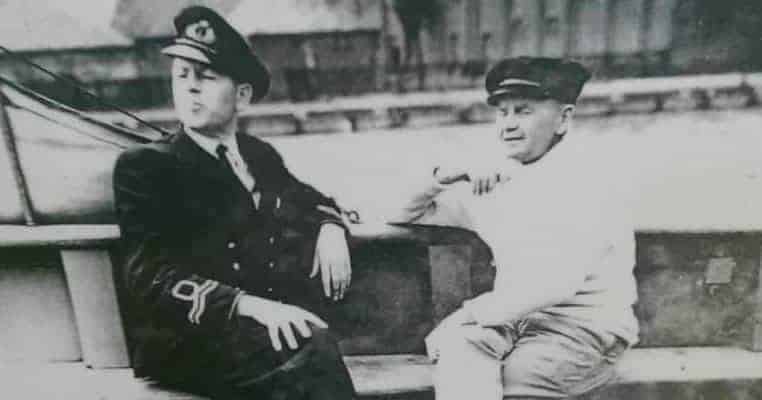 When Titanic struck the iceberg, Lightoller had just been relieved from commanding watch on the bridge by first officer William Murdoch. He had been getting ready for bed when he felt the collision, and made his way onto deck in his pajamas to see what had happened. Having missed sight of the iceberg by mere minutes, he returned to his cabin where he waited for his crewmates to summon him. This they duly did; and pulling on a blue sweater and officer’s coat and hat over his pajama top and bottoms, Lightoller made his way to the bridge where he and his fellow officers were briefed on the gravity of their situation.

Charles Lightoller must be commended for the diligence with which he worked as he lowered women and children into the lifeboats. He took charge of filling several of Titanic‘s 20 lifeboats while his captain—almost certainly in the midst of a serious mental breakdown—went about relieving men from their duties and shouting orders via a megaphone from the bridge. It must be said, however, that Lightoller also gravely misinterpreted Smith’s order of “women and children first” to mean “women and children only”.

The result of this misunderstanding was that several boats were lowered with empty seats, Lightoller having ordered their male passengers out at gunpoint. Contemporary accounts report him screaming, “Get out of there, you damned cowards! I’d like to see every one of you overboard!” However you might fault him for this, he was at least no hypocrite. Charles Lightoller remained on board the foundering ship for as long as he could until, while working away at releasing Collapsible Boat B, he was forced to dive into the water.

While swimming away from the ship Lightoller was pulled under by the suction. Held under by the weight of his revolver, he may well have drowned had it not been for a blast of warm water from the ship’s exploding boilers pushing him up back towards the surface. Eventually, he fought his way through the water and grabbed ahold of the upturned Collapsible B. Thirty other men had had the same idea, including the two wireless operators Jack Philips and Harold Bride and the first class passenger Colonel Archibald Gracie (whose account of the sinking remains one of the most authoritative).

Lightoller worked through the night instructing the men on how to balance themselves evenly to prevent the boat from capsizing. By the time the Carpathia came to their rescue at dawn, three men had died from hypothermia, including Philips. As it transpired in the British and American inquiries into the disaster, had it not been for Lightoller’s cool and composed leadership it could have been many more.

After Titanic, Lightoller returned to the seas aboard the Oceanic. These were the war years, however, and rather than serving aboard a passenger liner Lightoller was put to work on a seaplane carrier, the Campania. In late 1915, Lightoller was given command of the torpedo boat HMTB 17, and for attacking the German Zeppelin L31 Lightoller was awarded the Distinguished Service Cross. He went on to command another successful warship, the destroyer Garry, which rammed and sank a German U-Boat in July 1918. At the conclusion of the war, he returned to White Star a decorated man. But after more than 20 years of service, he retired and opened a guesthouse.

And so on June 1, 1940, the sixty-six-year-old Charles Lightoller set off across the channel with his eldest son Roger and eighteen-year-old Sea Scout Gerald Ashcroft. His steamer, a vessel built for 21 passengers, managed to pick up 130 stragglers from the motor cruiser Westerly and the sinking destroyer, HMS Worcester. He achieved a feat so staggering that it elicited the stunned remark of a petty officer back in Ramsgate, “My god, mate! Where did you put ‘em all!”

The 12-hour round trip wasn’t all plain sailing. As with all the other British vessels, Lightoller’s was the subject of considerable attention from German aircraft. But the seasoned sailor’s expert captaincy, combined with the supporting fire of the Worcester Anti-Aircraft Gunners, ensured that he, his passengers, and his crew all made it back in one piece. By some small stroke of fortune, among the survivors to be rescued 48 hours before was his second son, Second Lieutenant R. T. Lightoller. Roger and his youngest son Herbert would however count among the final casualty list of the most destructive conflict in human history.

There’s little doubt Lightoller experienced the same fear aboard the Sundowner as he did aboard the Titanic 28 years earlier. But fear was something Charles Lightoller had learned to deal with. After all, as he was to reflect later in life: “I do not pretend that any man can go down on a ship at midnight, in mid-Atlantic, and succeed in eliminating fear, without hard work. It was hard work.” Charles Lightoller passed away on December 8, 1952, aged 72. His ashes were scattered in Mortlake Crematorium in Richmond, Surrey. But his legacy lives on: manifesting itself most recently through the character Mr. Dawson in Christopher Nolan’s epic “Dunkirk” (2017).