The North Atlantic Tragedy: 8 Surprising Facts About the Sinking of the Titanic 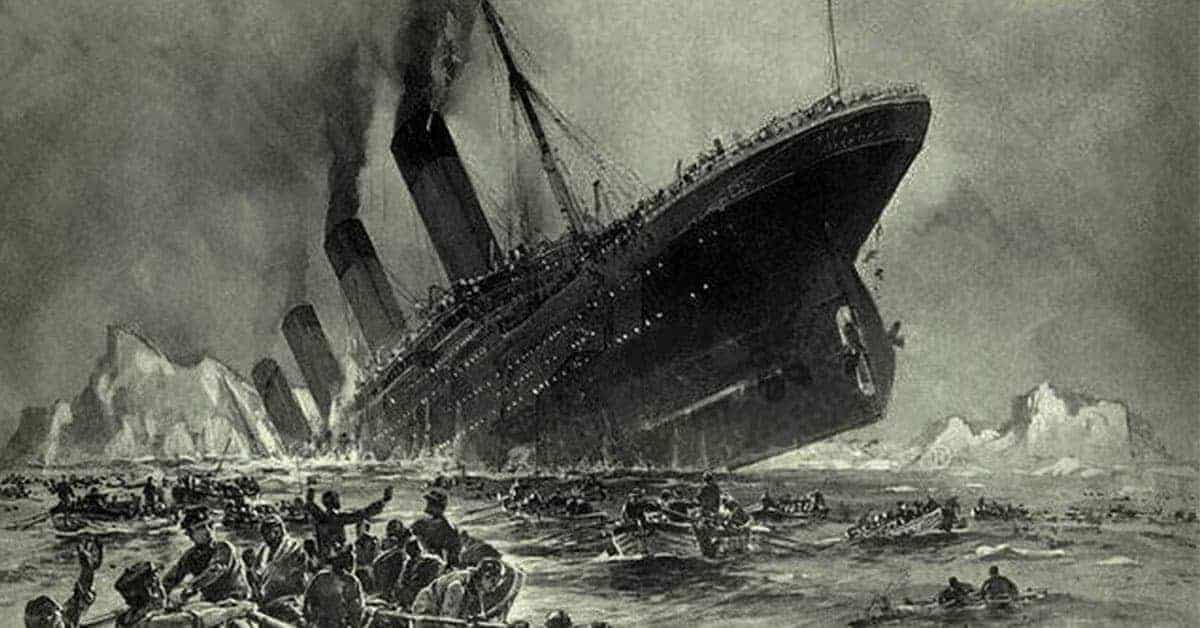 The North Atlantic Tragedy: 8 Surprising Facts About the Sinking of the Titanic

One of the great ironies about the sinking of the Titanic is that—precisely to avoid the kind of disaster that happened—it had been equipped with the most state-of-the-art, hi-tech Marconi wireless machines. Anyone familiar with the story will know these had a practical function: sending and receiving information between ships about hazards and obstacles. But they served other lesser-known purposes: receiving news bulletins and sending personal correspondences—think early 20th century tweets—from first-class passengers to friends and family at home. “Hello boy. Dining with you tonight in spirit. Heart with you always. Best love, girl” read one; “Fine voyage. Fine ship”, quite ironically, read another.

Wireless operators had in their best interests to forward as many of these messages as they could. This is mainly because it paid well, a decent supplement to their already reasonable incomes. But as anyone who’s ever held down two jobs simultaneously will tell you, with an increase in the quantity of your workload comes a loss in quality. And in committing their time to relay the messages of rich passengers while failing to pass on messages about the ice field Titanic was entering to Captain Edward Smith, Titanic’s wireless operators neglected their main duty to the safety of the passengers.

Jack Phillips and Harold Bride, received lots of ice warnings of icebergs (“bergs, growlers and field ice”, as they were known). One of these, from the steamer Mesaba, came in less than two hours before the collision and reported: “much heavy pack ice and great number large icebergs also field ice [sic]”. But Jack Phillips—by this stage alone on duty as his partner had gone to bed, didn’t relay it to the bridge. In fact, he responded to the next notification he received (from the nearest ship to the Titanic, the SS Californian) responding: “Shut up! I am busy, I am working Cape Race”—code for the wireless postal service.

This has led some to blame Jack Phillips, who was initially held up as a hero for staying in the wireless room sending of SOSs until the end. In fact, there’s another anecdote to mar his reputation: that, when a panicked passenger broke into the room to steal a lifejacket, Phillips knocked him out, most probably signing his death sentence. It could have been simply a Darwinian reaction. But if Phillips had no intention of escaping, it does beg the question: why rob someone else of the opportunity? Regardless, it seriously undermines the hagiographic tone of a contemporary poem written about Jack Phillips by Edwin Drew, which begins with the line: “He saved others.”

The closest ship to the Titanic stood by and did nothing

One of the biggest questions from the night of the sinking comes not from what was happening aboard the RMS Titanic, but what was happening aboard the ship nearest to her: the SS Californian. After warning Titanic about entering an ice field, the Californian’s crew decided to shut off wireless communications and pack in for the night. Titanic would strike the iceberg just ten minutes later. Californian’s crew then proceeded to stand by, watching her fire distress rockets but deciding not to respond. Only after she had sunk, and the Carpathia was fishing out the last of her survivors, did the Californian arrive on the scene.

Whatever the reason for the cataclysmic Californian’s failure, her captain Stanley Lord failed couldn’t escape public scrutiny. Despite arriving into Boston unnoticed—the country very much distracted by the loss of the Titanic—he was immediately summoned to appear at the American Public Inquiry launched on April 19. And his performance there was far from convincing: not only did he contradict his crew in saying he was 10 miles further away from Titanic than originally thought, but when pressed he refused to divulge his exact coordinates, citing them as “a classified state secret.”

He also gave conflicting accounts about why he had turned his wireless off, changed his mind about ever seeing the Titanic fire emergency rockets (at first he said he hadn’t, then he said he’d seen them from a third ship—probably the Carpathia) and—most incriminatingly of all—he conveniently misplaced the Californian’s scrap log, which documented everything from the night of Titanic’s sinking to the Californian’s arrival in Boston. After more than 100 years, the contemporary verdict remains unchanged: Stanley Lord’s ship probably was closer than the 20 nautical miles he claimed, and therefore was in a position to help.

Lord was held accountable by the American and British inquiries; his failure to act costing an untold number of lives. There was, however, a silver lining: International Maritime Law mandated 24-hour manning of wireless communications and introduced the standardization of rockets. No criminal charges were ever filed against Stanley Lord. But he was branded a coward and publically vilified. His career and personal life in tatters, he lived for another 50 years, at least surviving the Californian, which was sunk in World War One (and, fittingly, never found). He received occasional commissions from shipping companies, but nothing substantial. Still full of regrets, he died on January 24, 1962.

The ship’s baker survived because he was drunk

Fans of the James Cameron movie might remember one particular character from Titanic‘s final moments. Dressed entirely in white, his only dark features being his black curly hair and thick Mario mustache, this character joins Rose and Jack in climbing over the edge of the stern as it lifts to a 90-degree angle. He then looks over at Rose—exchanging solemn looks of fear and acceptance—before the impossibly suspended ship begins its slow and final descent towards the bottom of the Atlantic.

Fans might also remember him pulling out a hipflask just before the ship breaks in half, and taking a generous swig of (what one hopes is) seriously strong liquor. Cameron had done his homework: unlike Jack and Rose, this character actually existed: his story being one of many remarkable ones from that fateful April night. Charles Joughin was the ship’s chief baker. He had been assigned as the captain of Lifeboat 10 but refused to assume his post. Instead, he assisted the other crew to load the boats and ferried women and children down forcibly from A Deck (where they thought they would be safer) before hauling them on.

Once the boats were launched, he went below deck to his quarters for half a tumbler full of liquor. In doing what I think most of us would do in his situation, he inadvertently ended up saving his life. Though alcohol normally speeds up hypothermia, when consumed in large quantities it can sometimes protect against it. Lougin spent two hours treading water and admitted to not feeling the cold. Eventually found hanging off an upturned lifeboat, would stay at least partially in the water until morning when the Carpathia‘s crewmen dragged him from the water. Incredibly, the only physical mark of his ordeal was his swollen feet.

Joughin went on to live a long and healthy life: not at all usual for those who had spent any considerable length of time in the icy waters. Colonel Archibald Gracie, for example—the American writer and historian whose own remarkable experience of the sinking “The Truth About The Titanic” was published posthumously in 1913—never recovered. After being pulled underwater, he had managed to scramble atop an overturned lifeboat, where he passed the night along with Charles Lightoller, wireless operator Harold Bride and (hours later) Charles Joughin. But he never recovered from the severe hypothermia he had contracted and died within mere months of the sinking on December 4, 1912.

After the disaster, Charles Joughin briefly returned to England before emigrating to America. Apparently not too deterred by his experience aboard Titanic, he subsequently worked on a number of ships: According to his obituary, he even survived another sinking—that of the SS Oregon in Boston Harbor—though there’s some inconsistency over the dates. After retiring, he contributed a chapter to Walter Lord’s seminal book on the Titanic: “A Night To Remember”. He died in 1956, aged 78.

Motor Biscuit – Ransom E. Olds and His Impact on the Automotive World

Business Insider – Years Before The Titanic Sank, Two Mysterious Books Were Published That Seemed To Predict The Disaster

Zoomer – Why Did the “Titanic” Band Play On?

CS Monitor – The Band that Played On: The Extraordinary Story of the 8 Musicians Who Went Down with the Titanic

Reuters – CORRECTED-Fact Check-J.P. Morgan Did Not Sink The Titanic To Push Forward Plans For The U.S. Federal Reserve

BBC News – Titanic: The Final Messages From A Stricken Ship

History Channel – What Was the Titanic’s Captain Doing While the Ship Sank?

NBC News – Wireless Could Have Saved Lives On Titanic

Engineering Radio – Shut up! shut up! I am working Cape Race

WOUB – “Mystery Ship” Turned Away From Titanic In Darkest Hour; SECRETS OF THE DEAD: Abandoning The Titanic, Nov. 4 At 10 Pm

History Collection – Charles Lightoller, Second Officer of RMS Titanic was Also a Hero on the Beaches of Dunkirk