21 Photos Delivering The Visual History of the Klondike Gold Rush 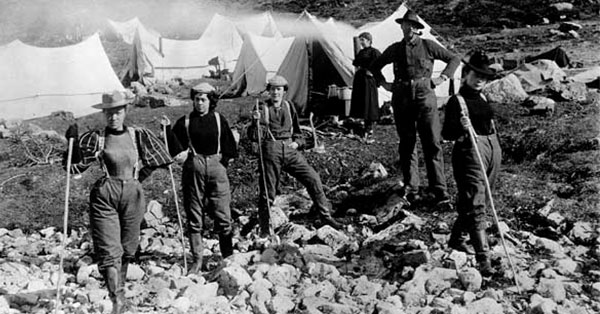 21 Photos Delivering The Visual History of the Klondike Gold Rush

The Klondike Gold Rush was a migration by prospectors to the Yukon Territory in north-western Canada. Gold was first discovered in Bonanza Creek by the local miners on August 16, 1896. When the news of the discovery reached Seattle and San Francisco roughly 100,000 men traveled up north in search of fortune.

Most of the prospectors traveled through the Dyea and Skagway Ports in South East Alaska and would then travel up the Chilkoot or White Pass Trail to the Yukon River and sail down to Klondike. The White Pass Trail was a treacherous path over mountains, which, at parts, was only two feet wide. These dangerous conditions lead to the deaths of many horses and the White Pass Trail became colloquially known as ‘Dead Horse Trail’. The Chilkoot Trail rose to a higher elevation than the White Pass, but was more commonly used. A businessman carved stairs into the ice and charged prospectors per day to use the ‘Golden Steps’.

Each prospector was ordered by the Canadian Authority to bring a year’s supply of food to prevent mass starvation. All the food, tools, camping equipment, and other essentials that the men would take often weighed as much as a ton. Horses, to help carry the burden, were often sold for $700 ($19,000 currently).

Dawson City was founded where the Klondike and Yukon Rivers met. In 1896 to 1898 the population exploded from 500 to 30,000 people. Of all these Dawson City inhabitants, only 4,000 struck gold and only a few hundred became rich. The extant hydraulic mining technology was too heavy to bring to the Klondike, so miners would make large fires to thaw the permafrost. The dirt could then be removed. Miners along the river beds would use rocker boxes to separate the dirt and rocks from gold flakes.

In 1899, gold was found in Nome, Alaska and in one week alone, 8,000 prospectors left Klondike. The Klondike Gold Rush had ended.