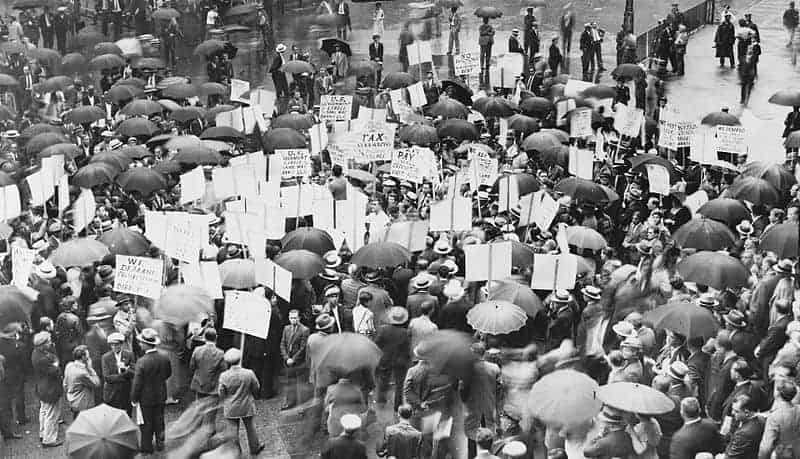 Prior to 1937, Inauguration Day for the office of the President of the United States occurred on March 4, except when that date was a Sunday. In such a case, the date moved to March 5. Thus, a period of four months transpired between the election and the installation of a new administration. The last four months of the Hoover Administration were among the worst, in terms of the depression, of any of the preceding years. Unemployment during that winter climbed rapidly. Cash continued in short supply. Once again, bank failures led the nation into a panic-driven run on the banks. As weaker and smaller banks collapsed, larger banks foun depositors lining up at their doors to remove their savings.

Many banks, throughout that winter, responded by simply closing their doors, refusing to admit customers. Hoover responded by lobbying Congress to enact emergency legislation to allow federal funds to further bolster the banking system. Congress did nothing. The incoming legislators weren’t interested in Hoover’s response, and the Republicans remaining in the Senate resented Hoover, blaming him for the loss of the majority in that body. Major banks in the United States also felt the tremors from bank failures in Europe. By the end of February, 1933, the nation was ready for Hoover’s exit from the national stage.

Herbert Hoover was 58 when he left office, and the only surviving ex-president. He left office embittered and angry. During the failed campaign he endured being pelted with eggs and vegetables at several stops as he attempted to deliver remarks defending his actions and outlining his plans. His speeches were interrupted by hecklers, his radio addresses were ignored, and the few Republican newspapers which endorsed him found their subscription bases reduced. His attempts to present FDR’s planned programs as socialism did not find an appreciative audience, other than with the far-right wing of his own party. Nonetheless, he left office determined to oppose Roosevelt’s plans for expanding the government.

Hoover published the first of several books defending his Presidency and attacking FDR in 1934, titled The Challenge to Liberty. He called the Banking Act of 1933, which stabilized the banks and created the Federal Deposit Insurance Corporation (FDIC), “gigantic socialism”. To Hoover, the National Recovery Administration and Roosevelt’s actions to save America’s small farms were “fascism”. Hoover drew thinly veiled comparisons between FDR’s New Deal and the rise of the Nazi Party in Germany. In 1938 Hoover went to Germany, stayed for a time at Herman Goering’s hunting lodge, Karinhall, and met Adolf Hitler. When FDR introduced Lend-Lease in 1940, which added American jobs, Hoover opposed it vehemently, calling it irresponsible war-mongering on the part of the President.

24. Hoover helped create the myth that FDR made the depression worse

By the end of 1933, the US economy showed signs of growth in all areas, including easing unemployment numbers and greater consumer spending. 1934 continued the upwards trends, as did the following year. By the end of 1936 all areas of the economy had returned to or exceeded the levels measured in the summer of 1929 except one. Unemployment remained above 10% by most estimates, though it too had improved from the darkest days of 1932. In late 1936 the Federal Reserve, concerned about the sharp increases in consumer spending and in bank lending, took steps to contract the money supply. The result was the Recession of 1937, which ended four years of economic growth.

Hoover was one of the earliest opponents to call the downturn the Roosevelt Recession, a name adopted by Republicans and even conservative Democrats. Its causes were many, but again a rapid and aggressive response by the federal government limited its scope, and by the beginning of 1939 employment had returned to 1936 levels, and the economy again experienced steady growth, which expanded with the coming of Lend-Lease and the eventual war economy. Hoover and conservatives argued that it was only the war which ended the Great Depression, made worse by FDR. Conservatives continue to advance that argument today.