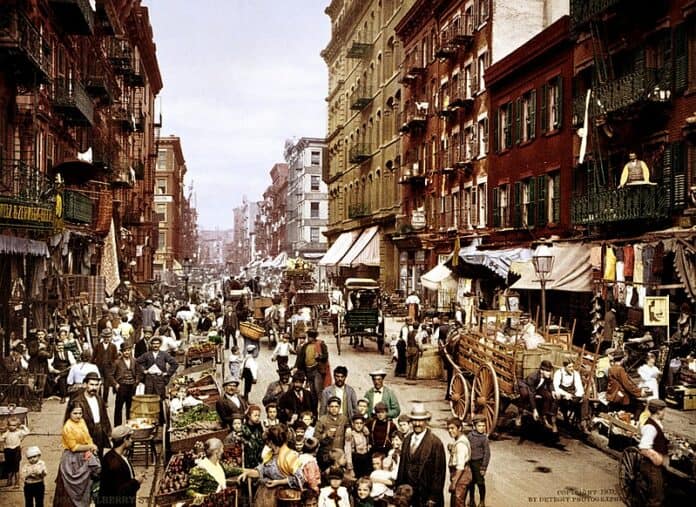 A look at the history of agriculture and food production in the United States lays bare a mass of seeming contradictions. Since the mid-19th century, the percentage of the American work force employed in agricultural jobs decreased, from nearly 70% in the 1840s to about 2% at the beginning of the 21st century. Yet agricultural production has increased steadily, and continues to do so. While America continues to lose farms (90,000 in the five years between 2007 and 2012), the production of food continues to increase. Over the years, American agricultural industries steadily improved techniques, irrigation methods, crop quality, animal husbandry, and simply created more food.

Farming is of course just the first step creating food for the table, and the system through which American crops become meals is huge, complicated, and as recent events have made clear, easily breakable. How our food arrives at stores, and eventually at our tables, has evolved over time, responding to changes in the way Americans (and others) eat. Here are some examples of how food goes from farm to table in America, and how it has changed over time to the system we have in the early 21st century.

1. Eating local was once the rule in America

In early America, food arrived in the markets of towns and cities from the surrounding countryside. Hogs were delivered to cities on the hoof, with many American towns allowing them to wander the streets, where they served as scavengers prior to slaughter. Pork consumed at Philadelphia tables came from Pennsylvania or New Jersey farms. Although beef was known at American tables, in the early days diners were more likely to be served lamb or mutton than a beef roast. Although some meats were shipped between cities, especially dried, salted, or smoked fish, nearly all foods consumed were of local production.

Salt became one of the most important commodities in America, not as a seasoning but as a means of preserving meat and some vegetables. Preserved meats served as the mainstay of diets, especially in the winter months. City dwellers purchased their food for more or less immediate consumption, especially meats and vegetables. As America began to push westward, the need for shipping produce from the emerging farms of the Northwest Territory and the South led to the young nation’s early infrastructure projects, the National Road, canals, and the first railroads. By the mid-19th century, diners in New York’s restaurants and homes were likely to dine on pork from hogs raised in the Ohio Valley and processed at the meatpacking plants in Cincinnati.