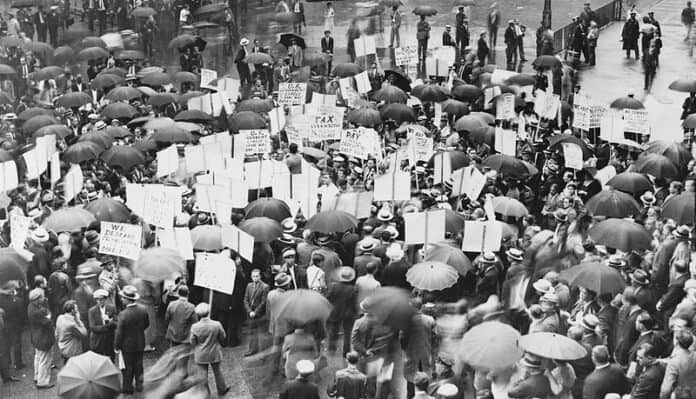 In the first week of September, 1929, stock prices in the United States began a steady and steep decline. The downward slide resulted in a crash near the end of October, ending six years of economic growth, and ushering in the era known as the Great Depression. For the following decade, the United States experienced crippling economic conditions, exacerbated by the collapse of economies across the globe. The federal government of the United States, led by President Herbert Hoover, hesitated to take action to combat increasingly bad conditions. Unemployment skyrocketed. The construction industry ground to a halt. Farmers and food producers suffered from economic conditions, made worse by widespread drought.

Banks failed, and families saw their life’s savings wiped out, as lenders foreclosed on homes and farms. Millions of Americans raced to withdraw their uninsured savings from banks, forcing thousands to close or suspend operations. By early 1933 over 9,000 banks across the country had closed. Lack of confidence in the federal government, of jobs, of money, and of food, created panic conditions. President Hoover, a highly successful mining engineer and businessman, tried to address economic conditions by announcing the downturn was temporary, and would quickly improve. Instead, they continued to grow worse. Here is the story of the first three years of the Great Depression in America, and the federal response which likely made it much worse.

1. No one knows the true level of unemployment during the first three years

Estimates of the numbers of unemployed across the United States during the first three years are based on figures created by analysts and economists in the 1950s. During the early years of the depression the United States government did not monitor employment numbers. The hardest hit during the depression were those seeking their first job, entering the pool of workers for the first time. Next were those over the age of 45, who found getting hired virtually impossible if they lost an earlier job. President Hoover prodded urban governments to create public works projects and jobs, but declining tax revenues made financing such projects impossible.

From fall, 1929 to late spring, 1933, the economic downturn grew progressively worse, though its impact on the jobs market remained unmeasured in official terms. Joblessness, clearly visible in America’s cities and towns, was not part of the agenda of the federal government. Hoover sought to stimulate the economy through other means and programs. The president believed direct assistance to those out of work was the purview of charities, churches, and local communities. In his view, and the view of Republicans in Congress, the federal government’s role regarding widespread unemployment, which reached an estimated 24.5% in early 1933, was limited.