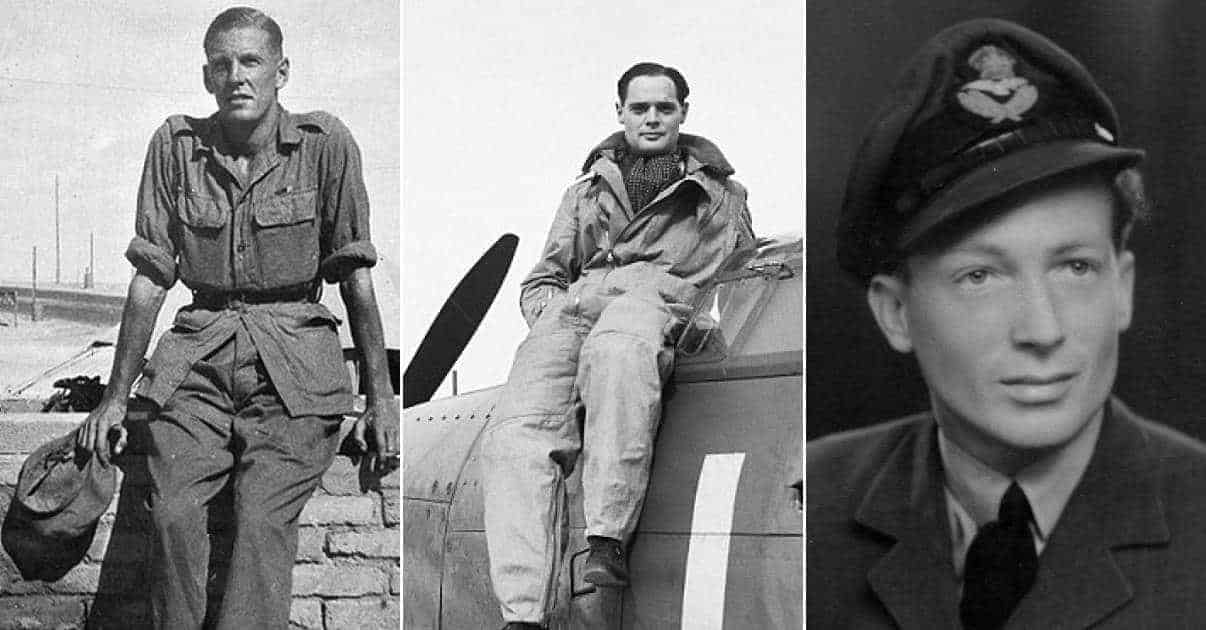 German pilot Erich Hartmann scored numerous aerial victories and was considered to be one of the best flying aces of the war. He was just 18 when he started his military training in October 1940. He was assigned to Jagdgeschwader 52 in 1942 and fought on the Eastern front. When his unit was surrounded by American and Soviet forces at the end of the war, he commanded his unit to surrender.

They were sent to an open-air compound to await transfer to the Soviet Union. The conditions at the camp gradually deteriorated as the number of prisoners grew to surpass 50,000. It was so bad that American guards would turn a blind eye to prisoner escapes. In some cases, the Americans would even provide maps or supplies to escaping prisoners.

After the open-air camp, he was transferred to a POW prison where the Soviets realized that Hartmann could be of use to them. His success as a pilot had made him something of a hero in Germany and the Soviets wanted him to as a spy and to spread propaganda in East Germany. Hartmann refused. As punishment, he was placed in 10 days confinement in a 4-by-9-by-6-foot chamber. The Soviets realized that there was little they could do to Hartmann to cause him to betray his men, so they threatened to kidnap and kill his wife. He still refused to convert to communism, and he went on a hunger strike. After four days, the Soviets began force-feeding him.

On December 24, 1949, he was officially arrested and three days later sentenced to 20 years in prison. He was charged with a number of false war crimes as the Soviets continued to try and break him. He refused to confess to any crimes, and his sentence was increased to 25 years of hard labor. He refused to work and was placed in solitary confinement. The other prisoners revolted at Hartmann’s treatment and he was transferred to another camp where he spent 5 years in solitary confinement. In 1955, after more than 10 years in Soviet prison camps, a trade agreement between West Germany and the Soviet Union was reached which secured the release of 16,000 German military personnel including Erich Hartmann. He died in 1993 at the age of 71.

Henri Giraud joined the French Army in 1900 at the age of 21. He was sent to command troops in North Africa until he was ordered back to France after the outbreak of World War I. On August 30, 1914, he was seriously wounded in the Battle of St. Quentin. Left for dead, he was found by the Germans who placed him in a prison camp in Belgium. He remained at the camp for only two months until he managed to escape by pretending to be a worker with a traveling circus. He made his way back to France by traveling through the Netherlands.

He stayed with the military through the interwar period and was a member of the Superior War Council when World War II began. He became the commander of the 7th Army which was later merged with the 9th Army. He was on the front lines with a reconnaissance patrol when he was captured by the Germans on May 19, 1940. Giraud was taken to Konigstein Castle in Germany and he remained there for over two years.

He devoted his time at the infamous castle to devising the perfect escape plan. The first part of his plan involved learning German and memorizing a map of the area. Then he made friends with some of the guards who eventually agreed to smuggle him bits of twine and copper wire. He twisted the copper wire and twine with torn bedsheets in order to make 150 feet of strong rope.

On April 17, 1942, he used the rope to climb down the cliff of the mountain prison. He shaved his distinctive mustache and met with a Special Operations Executive who provided him a change of clothes and identity papers. Desperate to make it back to France, he constantly took on different disguises and identities in order to make it through enemy territory and back home. Once in France, he was contacted by President Eisenhower, who offered safe passage to him and his sons in exchange for help with the African front of World War II.

Airey Neave was a man who was willing to do whatever it took to end his time as a POW. In February 1940, he was assigned to the 1st Searchlight Regiment, Royal Artillery in France. He was wounded at Calais in 1940 and was taken captive by the German Army. He made short work of escaping from his first prison camp but was recaptured a few days later. He was interrogated by the Gestapo after he was recaptured, an experience that he solemnly remembered as “unpleasant.”

Unwilling to risk another escape, the Germans transferred Neave to the “escape-proof” Colditz Castle. From the moment he was imprisoned at the castle, he had a fanatical desire to escape. His first attempt came a mere six weeks after his imprisonment. Neave thought if he could convince the guards he was one of them, he could get past the gates and out of the prison. So, using materials from the theater department, he made himself a German uniform. However, as soon as he made it out of the castle, the scenery paint he had used to make his clothes shone very bright green under the searchlights. After another long interrogation, Neave was returned to the prison at Colditz.

The conditions at Colditz were not ideal as Neave was poorly fed and badly treated during his stay. He never stopped trying to come up with a way to escape and ended up working with a Dutch prisoner named Anthony Luteyn. The pair improved upon Neave’s original escape plan with both of them wearing German uniforms that they had created. Working with the theater gave them the perfect cover for their uniform creation and a way out.

During a Saturday-night prison revue, the two escaped through a trap door on the stage. Once outside the walls of the castle, Neave managed to make it 400 miles to the Swiss border. From there he managed a boat to England and became the first British officer to escape from Colditz and make it all the way back home.

Gus Anckorn was a member of the Royal Artillery stationed in Singapore in 1942. He was there for three days when an anti-personnel bomb was dropped just ten feet from the truck he was driving. Anckorn was severely wounded in the blast and was rushed to the hospital. His luck at surviving the blast was short-lived, as he was transferred to the hospital right before the Alexandria massacre.

Gus was still covered in blood and lying in his hospital bed when 100 Japanese soldiers entered the hospital. Those unable to walk were bayonetted in their beds, those who could walk were marched outside and shot. Unwilling to watch his own demise, he covered his face with a pillow and awaited his own bayonet wound. It never came.

Anckorn was taken as a POW and sent to work on the Burma Railway. Still weak from his prior wounds, he struggled to meet the demands of the Japanese overseers who wanted him to climb a 100-foot aqueduct. When he could not keep up one of the overseers poured hot tar down his back. The burns from the tar nearly killed Anckorn and he was sent to a hospital camp. All of the men who had been working on the aqueduct with him died in a matter of weeks as Anckorn recovered in the hospital. He was then sent back to work. The men were starved and beaten regularly.

Anckorn was well-versed in magic, and he used his skills to distract the guards so he and other prisoners could steal food. Once he took 49 eggs from the kitchen and gave them to the men to eat, telling the guard that he needed them to practice a trick. In August 1945, as the Allies were closing in on Japan, Anckorn and four others were put in front of a firing squad. But instead of being shot the Japanese soldiers started arguing among each other, likely about being charged with war crimes. He was led back to the camp where he was soon liberated by Allied forces.

War History Online – The Last WWII Soldier Ever To Be Repatriated Was András Toma, A Hungarian Who Spent 53 Years In A Russian Mental Institution

The Guardian – The Forgotten Highlander by Alistair Urquhart

History UK – Douglas Bader: The Double-Amputee Flying Ace Of The Battle Of Britain

Air & Space Magazine – Erich Hartmann, the Most Successful Fighter Pilot of All Time

How Frank Savicki Broke Free From a German POW Camp

A WWII Rampage at a POW Camp…In Utah