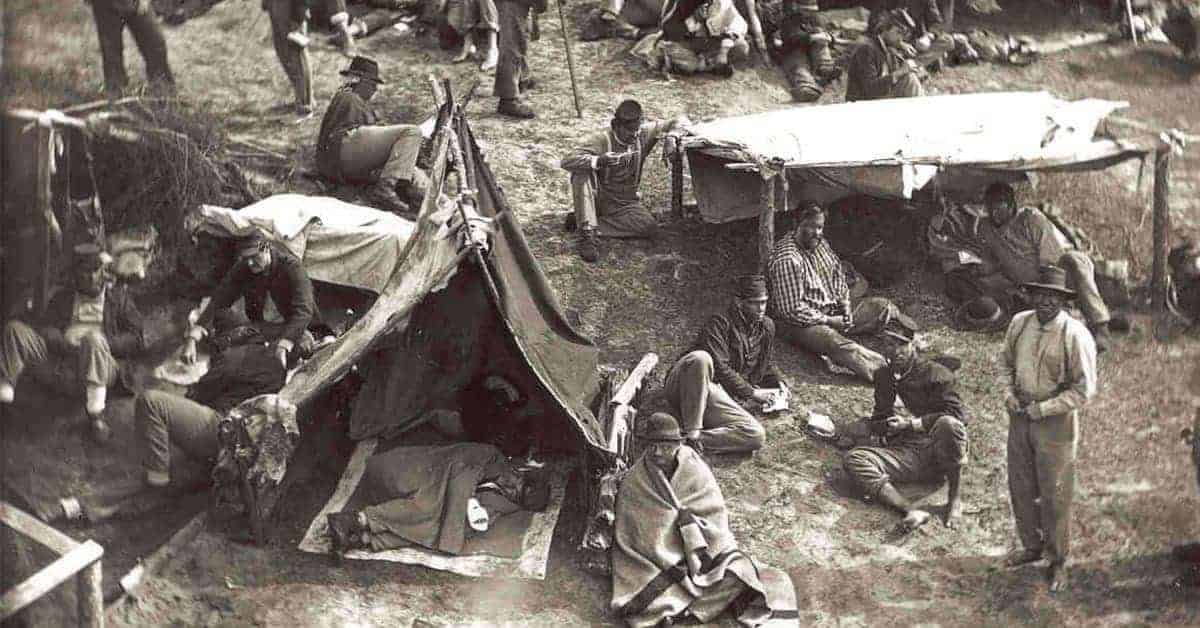 The American Civil War remains the bloodiest war the United States has ever fought. More than 600,000 Americans died in the war. It remains one of the most important time periods in American history and is something that even today is often debated and discussed with much importance (the recent protests and discussions surrounding Civil War memorials just to name one instance of the Civil War still playing a role in today’s society).

Like all wars, prisoners play an important role in the interaction between the two sides. How those prisoners are treated is a hot-button issue. For the majority of human history, POWs have not been treated well. In fact, it has only been recently that there have been international agreements on the treatment of prisoners that the majority of the World has agreed to follow.

The Civil War is not unusual when it comes to the treatment of POWs. For the first two or so years of the fighting, the North and the South had an unofficial cartel parole program that allowed for the almost immediate exchange of prisoners between the two sides.

This all changed in 1863 when the exchange system fell apart, and both sides started to collect captured soldiers from the opposing side.

The reason for the collapse is a bit complicated, as the source material is inconsistent. The reason that is seen the most is that the program shut down because the North was upset that the South failed to return the majority of Black prisoners, as the Confederates considered them slaves, and not members of any Army. The freemen from the North were treated badly, and in a lot of cases executed outright.

The other reason that you’ll see in historical sources is more mundane. Those sources state that while the above is true, the real reason for the breakdown of the exchange program was that Ulysses S. Grant saw an opportunity to use the North’s manpower advantage, by capturing and holding as many Confederate soldiers as possible.

Whether or not the breakdown happened for humane or military strategy reasons, it did break down. What followed demonstrated the treatment of prisoners of war at its absolute worst.

No matter what you read on the Internet, the Confederacy was not alone in its dismal treatment of captured soldiers. By the end of the war, the death rate percentage-wise was almost equal between the North and the South. For example, Camp Douglas, the North’s largest prison camp, saw a mortality rate of between 17 and 23 percent between 1863 and 1865, most of those dying from overcrowding, lack of supplies, and the brutal Chicago winters.

Despite all that, there is one prison that has garnered a very bad reputation, and for very good reasons. Andersonville, or Camp Sumter as it was officially known, has garnered a lot of attention by historians as the worst of the worst when it comes to Civil war POW camps.

By the end of 1963, the South was in dire need of more space to â€˜store’ captured Union soldiers. The South was capturing soldiers in droves, and the camps that existed up until that point were overflowing to the point where they could no longer be expanded. In February 1864, to combat that problem, the Confederate States of America (CSA) commissioned the establishment of Camp Sumter, which would soon take on the name Andersonville (named after the railroad depot in the neighboring county).

By June 1864, the prison camp was the largest in the CSA, and held so many prisoners that had it been a city it would have been the fifth-largest city in the South. The problem was that the camp was only supposed to hold 10,000 soldiers at full capacity. That number was over 30,000 just six months after it opened.

Another problem was that there was no shelter. Due to inflated lumber prices, prisoners were only able to shelter in shanties called shebangs, which were constructed with scraps of wood (usually twigs most likely) and blankets.

With the number of prisoners that the camp had to support, it isn’t surprising that the death toll was astonishingly high. The camp was only open for a year, and in that time 13,000 Union soldiers died from poor conditions, mishandling by Confederate officials, and lack of supplies and shelter.

Robert H. Kellogg was a sergeant major in the Connecticut Volunteers. He was captured and sent to Andersonville on May 2, 1864. He wrote this description of what he saw as he was led into the camp:

“As we entered the place, a spectacle met our eyes that almost froze our blood with horror, and made our hearts fail within us. Before us were forms that had once been active and erect;â€”stalwart men, now nothing but mere walking skeletons, covered with filth and vermin. Many of our men, in the heat and intensity of their feeling, exclaimed with earnestness. “Can this be hell?” “God protect us!” and all thought that he alone could bring them out alive from so terrible a place. In the center of the whole was a swamp, occupying about three or four acres of the narrowed limits, and a part of this marshy place had been used by the prisoners as a sink, and excrement covered the ground, the scent arising from which was suffocating.”

The question that has always lingered in historian’s minds is the reason behind the deplorable conditions. There are some that argue that the camp was placed in Southern Georgia (well away from other established CSA prisoner camps) due to how hard it would be to get supplies to the area. Those who view it this way posit that there was some grand conspiracy to house as many Northern soldiers as inhumanely as possible for as long as possibly perpetrated by the leaders of the CSA. There is some evidence of this, as it has been shown that the Confederacy was able to move soldiers to and from the prison, but for some reason were unable to send supplies the same way.

Others argue that there is no evidence that this was deliberate, and it was just poor management by a new country who had larger things to worry about (namely winning the war against a better equipped and larger foe).

The Enduring Reputation of Andersonville Prison

The question that has to be considered is what makes Andersonville so different than other POW camps during the Civil War. They were all atrocious when it comes to living conditions, both in the North and the South. Why does Andersonville continue to have the reputation as the worst of the worst?

Almost 1.5 million people visit the site of Andersonville prison each year (stat as of 2011). It is one of the most popular Civil War sites in the South. There have been numerous books written about the camp, and there have been even well-received documentaries and dramatizations of the camp produced by Hollywood over the years.

Why has Andersonville become the main representation of the horrors of Civil War POW camps? The answer is complicated.

From a historian’s perspective, one possible answer lies with a man named Henry Wirz. He was the commandant of the inner stockade at Camp Sumter. Wirz was the only CSA official to be tried, convicted and executed for war crimes after the end of the war (though others were executed for other reasons). Even Jefferson Davis, the President of the Confederate States of America, and Robert E. Lee were granted clemency. Lee was never imprisoned at all or tried, while Davis was imprisoned for a while then released.

Wirz, on the other hand, was immediately captured, tried, and hanged for the atrocities at Andersonville, despite there being ample evidence of similar horrors at Northern prisons. Most historians posit that the reason why the legend of Andersonville has endured is because of how much more information was given to the public regarding the camp than any of the others. It is also a case of the victors writing the history, as the North was unlikely to prosecute its own leaders for the atrocities that happened at Northern POW camps.

Another reason why the camp has endured is that it still exists. Many if not most of the Civil War POW camps were immediately dismantled. Most of the dead from those camps were moved to either national cemeteries or thrown into mass graves away from where the camps were located. Andersonville, on the other hand, is still standing. There is a cemetery there that holds the 13,000 that died, and as of 1998, there is a POW museum on the site that is dedicated to all POWs in every war that the US has fought in.

Finally, the reputation of Andersonville may be living on simply because of the memoirs of former prisoners that were released after the war. Those memoirs were used in a novel named Andersonville that was published in 1955. It won the Pulitzer Prize and inspired a film and several other representations of camp life at Camp Sumter.