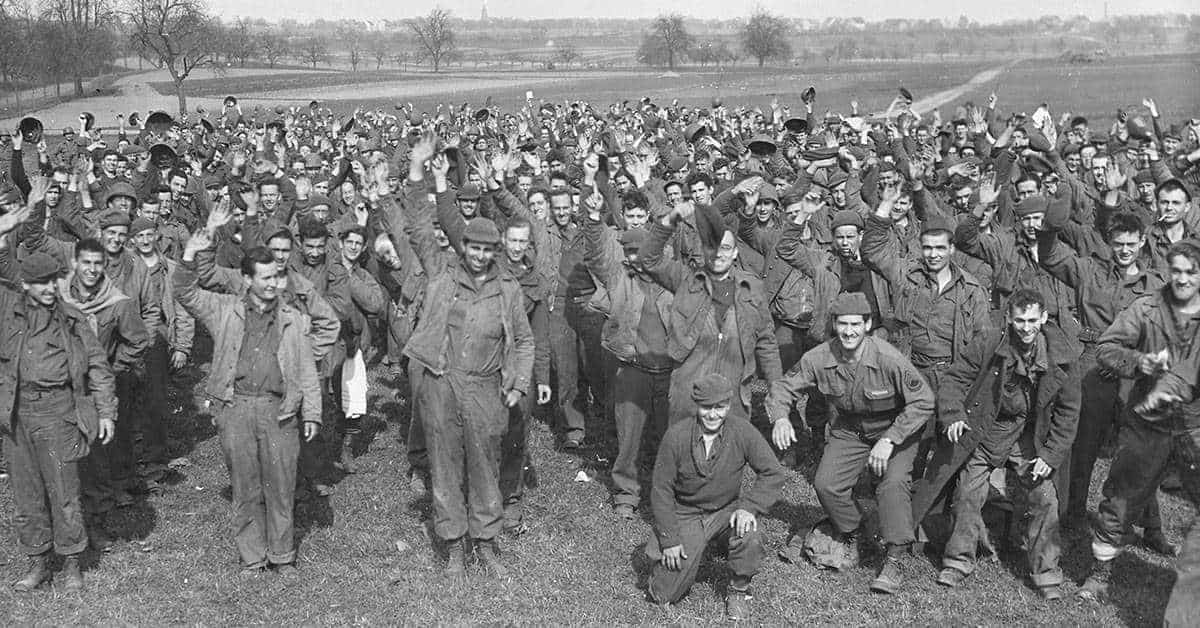 On retro television channels featuring the hit shows of the 1960s and 70s, the World War II sitcom Hogan’s Heroes, set in a German prisoner of war camp, retains its popularity. In the show, for anyone unfamiliar with its premise, the prisoners aren’t really prisoners at all but highly skilled and trained commandos tasked with operating behind enemy lines base of operations to help escaping prisoners get out of Nazi Germany. They also conducted sabotage missions as directed by their commanders in London.

Hogan’s Heroes originally ran from 1965 – 1971, building its audience in its early days in part from the popular prisoner of war escape movies The Great Escape and Von Ryan’s Express. In truth its depictions of the Germans as blundering nincompoops were inaccurate, and Allied prisoners of war did not conduct sabotage. They were too interested in getting home, and ingenious methods were developed to help them.

The Germans were efficient jailers, although they wrestled with the Allied prisoners’ proclivity for escaping throughout the war. Prisoners demonstrated great ingenuity (and courage) in both their methods of escape and their use of support systems, aided and abetted by offices and bureaus in London, Washington, and Geneva, and other sites. One of the means by which they were supported was via the provision of escape maps, tools, and money, and one of the means of providing these verboten items to the prisoners was through the innocent board game, Monopoly.

In 1935 the British printing firm of John Waddington Ltd, based in the industrial city of Leeds, acquired the rights to produce and market the game Monopoly in the United Kingdom and other sites throughout the British Empire. Waddington’s felt that the game’s Atlantic City New Jersey locations were too foreign to appeal to UK markets and replaced them with locations in and about London (the American Boardwalk is replaced by Mayfair, for example). This version became the standard throughout the British dominions with the exception of Canada, which retained the US locations and railroads. It was this British version that became well known in Europe.

In the early days of the Second World War, a series of military disasters befell the British, and large numbers of prisoners were soon in the hands of the Germans. Placed in camps throughout Germany, Poland, and for a time North Africa, these prisoners began to exhibit an annoying penchant – to their German captors – of escaping the bounds of their prisons. Few made it out of the Reich, but the Germans nonetheless had to devote ever increasing numbers of troops to guard their intractable charges. It was soon evident to the military high commands that escaping prisoners caused problems for the enemy, a situation which they immediately set about exploiting.

As prisoners gained experience on the run from the prison camps, they learned of many things which were useful in aiding a successful escape, chief among these being maps and money. Bribes were particularly useful in Hitler’s Reich, and knowledge of the terrain allowed an escaping prisoner to put maximum distance between himself and the pursuers searching for him.

The Germans and the British were signatories to the Geneva Convention, which among other things mandated the proper treatment of prisoners of war, and outlined certain items which the prisoners could be allowed to receive from charitable organizations to help ease the monotony of their existence. Among these were games such as playing cards and chess sets, checkers, cribbage boards and the popular board game Monopoly. This attracted the attention of the British Secret Service, including the section known as MI9.

MI9 was formed within the British Directorate of Military Intelligence soon after the British entered World War II in 1939. Because of bureaucratic infighting within the Directorate, its operation was poorly funded and chronically understaffed. The group operated out of offices in London hotels and branch offices in the Mideast. Its primary purpose was to provide aid to escaping prisoners of war. Winston Churchill, who had himself been a POW during the Boer War and successfully escaped his captors, took a particular interest in the fate of the men who fell into enemy hands.

The British recognized the almost impossibly long odds against a successful escape – if success was measured solely by the result being a prisoner returning to England. But any prisoners on the loose within the Reich drained manpower from their captors, meaning that even recaptured prisoners were contributing to the war effort. Those who did make it home successfully brought with them valuable information about conditions within German and Italian held Europe, boosted morale at home, and provided a welcome shot in the arm to those still held in prison camps.

Maps were of infinite value to escaping prisoners, but paper maps were difficult to conceal, easily damaged, and noisy to unfold. MI9 solved that problem by having maps produced on silk. Using commercially available prewar maps as references, MI9 developed scale maps for printing by Waddington. Later in the war, as silk became scarce due to its use in parachutes, Waddington substituted rayon.

The problem of getting the maps to the prison camps was resolved by several means, one of which was to have Waddington place the maps between the paper playing surface of a Monopoly board and its cardboard backing. The silk/rayon material was thin enough to avoid arousing Teutonic suspicion. The games were then marked with a small red dot on the playing surface, indicating to the recipients that the game contained escape materials. The games were distributed to the prison camps via the Red Cross and other charities – a violation of the spirit of the Geneva Convention.

The German captors allowed Red Cross and other contributions because they believed that such items distracted their prisoners from becoming involved in escape activities out of boredom. For the same reason, the Germans allowed British prisoners to operate in-camp theaters, presenting plays to their fellow prisoners and to the camp guards and support personnel. When MI9 got wind of the entertainment committees formed in the camps, they recruited EMI – the record producer – to include maps in the gramophone records which the Red Cross provided to the prisoners. Because the records needed to be broken to extract the maps, MI9 referred to this undertaking as Operation Smash Hit.

Coded messages from within the camps were sent to fictitious addresses set up by MI9 for various charitable organizations. Thank you notes from grateful game players were often messages to MI9 informing them of what had been received and what additional help was needed. Games such as Monopoly, checkers, chess, and others often included other escape materials such as money, files, magnetized metal for the manufacture of compass needles, camera film, and other assorted paraphernalia. Prior to the United States entering the war the United States Playing Card Company was contracted to produce standard and pinochle card decks in which the playing cards concealed escape aids.

The Germans, being meticulous record keepers, allowed the prisoners to sign receipts for many of the items, having been persuaded by the senior prisoner officers that so doing allowed the Red Cross and other organizations to confirm that their work was being allowed and the Geneva Convention followed. The receipts helped MI9 to confirm what materials were being delivered to the prisoners and in what regional areas. MI9 could thus confirm that maps of Poland were being received in Poland, for example.

Many prisoners who escaped successfully – inexplicably the non-baseball-playing British referred to a successful escape as a home run – ended up joining MI9 upon return to England, enhancing the branch’s knowledge of conditions within the camps and their ability to exploit them. Others worked with the Secret Intelligence Service (SIS) to document escape routes set up by the various underground groups in Europe, information then forwarded via Monopoly and other games to the camps. One such officer employed by SIS was Navy Commander Ian Fleming. After the war, Fleming drew on his intelligence work with SIS to create Commander James Bond in a series of novels and short stories.

Not all troops were briefed on the details of the Monopoly deception due to the need to maintain secrecy, only screened officers and non-coms were aware of the program. Senior officers in the camp decided who was to be made aware of MI9s intervention. But all troops were made aware of escape assistance being provided in some manner, helping to motivate prisoners to attempt to escape.

Prisoners who successfully escaped were often put to work briefing Allied troops on existing underground units and escape routes in the hope of allowing them – particularly airmen who may be forced to bail out over German-held country – to evade capture in the first place. By the end of the war bomber crews flying over Germany were equipped with silk/rayon maps sewn into their clothing, helping them to find their way to safety. Evading capture grew in importance later in the war as the Allied bombing campaigns caused increased hostility from the German populace towards American and British airmen.

By the end of World War II, nearly 36,000 prisoners had successfully returned to England after either evading capture or escaping from German prisons. Nearly all of them did so by crossing the borders of neutral Switzerland, Sweden, or Spain, where they were turned over to the British or American consulate for repatriation. MI9 and its Monopoly ruse were certainly not responsible for all of them, and an accurate estimate of how many men made it home as a result of the materials sent in Monopoly and other games is impossible. The branch was dissolved in 1945 and many of its records destroyed. What is known is that MI9 produced over 240 individual maps of sections of the European and North African theatres, with at least 1.7 million copies distributed to prisoners via Monopoly and other games.

Helen Fry – MI9: A History of the Secret Service for Escape and Evasion in World War Two

ABC News – Get Out of Jail Free: Monopoly’s Hidden Maps