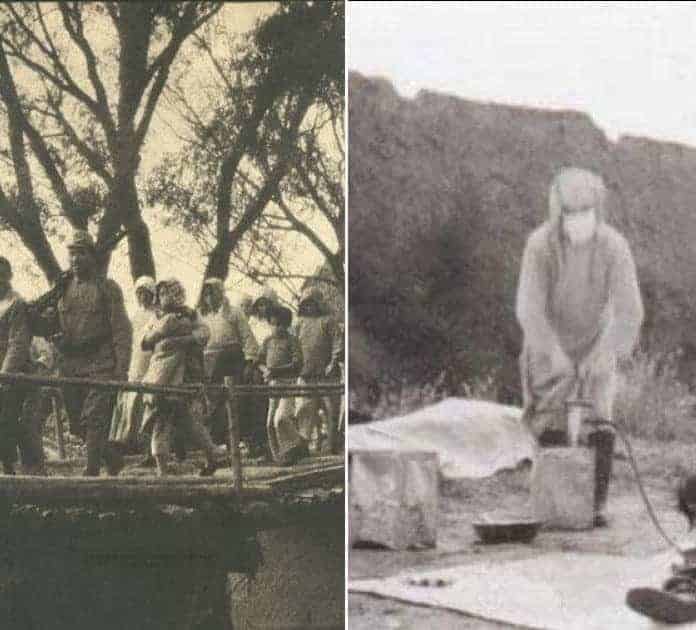 Beginning with a dispute between Japanese and Chinese troops after decades of Japanese adventurism in China, the Sino-Japanese war erupted according to most scholars on the night of July 7, 1937 near what was known as the Marco Polo Bridge. Random shooting soon developed into a full scale battle which led to the capture by the Japanese of the port city of Tianjin and the larger city of Beijing. Japanese civilians living on the Chinese mainland were drawn into the conflict and the forces of Chiang Kai-Shek were soon in full scale warfare with Japanese troops and civilians. Fighting on all fronts of the Sino-Japanese war was fierce and bloody, and civilian populations were often the victims of strikes from both sides.

Soon the war took on darker overtones when the city of Nanking fell to the Japanese and was quickly followed by atrocities which became known as the Nanking Massacre and the Rape of Nanking. This was only the beginning. Throughout the course of the war, which continued until the surrender of Japan to the United States and its Allies in September 1945, atrocities committed by Japanese troops against Chinese prisoners of war and civilians mounted. At first, Japan hoped to limit the war with China, maintaining its strength for what it believed would be a showdown with the Soviet Union. Instead, Japan’s activities drew the attention of the United States, who took diplomatic steps to stop Japanese aggression and assist the Chinese. These steps eventually led to Japan’s attack on the Americans at Pearl Harbor.

Here are eight examples of Japanese atrocities committed against the Chinese during the Sino-Japanese War and subsequently World War II.

After losing the battle of Shanghai in 1937 the Chinese Revolutionary Army, led by Chiang Kai-Shek, was aware of the impossibility of holding the city of Nanking, despite the heavy casualties which had been inflicted on the Japanese. By December 9 the Japanese were in position to assault the city and by December 13 the Chinese forces defending it had largely withdrawn.

Japanese troops entered the city. According to a journalist traveling with the Japanese troops they were inspired in part by the knowledge that looting and rape would not be in any way curtailed by their officers once the city was in Japanese hands. Several western neutrals, including German national and businessman John Rabe, a member of the Nazi Party, recorded the events which followed in diaries and journals.

For the next six weeks, Japanese troops perpetrated mass murders, rapes, thefts and looting, arson, and lesser crimes against the civilian population of Nanking. Two Japanese officers, Toshiaki Mikai and Tsyuoshi Noda, had conducted a contest during the march to Nanking to decide which of the two could kill a total of 100 Chinese using their swords. Neither had reached that total when they entered Nanking, and both continued the contest. Following the combat which took the city both had exceeded 100 kills, and unable to decide which had reached that number first, they decided to extend the total to 150. Both officers were eventually tried and convicted of war crimes after surviving the war, and both were executed by firing squad.

More than 20,000 Chinese women were raped by Japanese troops, with most of the victims being killed after the rape was completed, many with their bodies defiled with bamboo stakes or other items such as bayonets. Estimates of the number of Chinese civilians and prisoners of war who were murdered by Japanese troops vary, with Chinese sources claiming over 300,000 and western observers leaning towards 200,000.

Many Japanese sources deny the extent of the massacre, contending that the reports of the event were an exaggeration by the Chinese. As recently as 2005 Japanese history textbooks used for the equivalent of junior high school made no reference to the massacre. The official Japanese position is that although some killings of civilians did take place, the event is grossly overblown by the Chinese and is a point of contention in Sino-Japanese relations today.