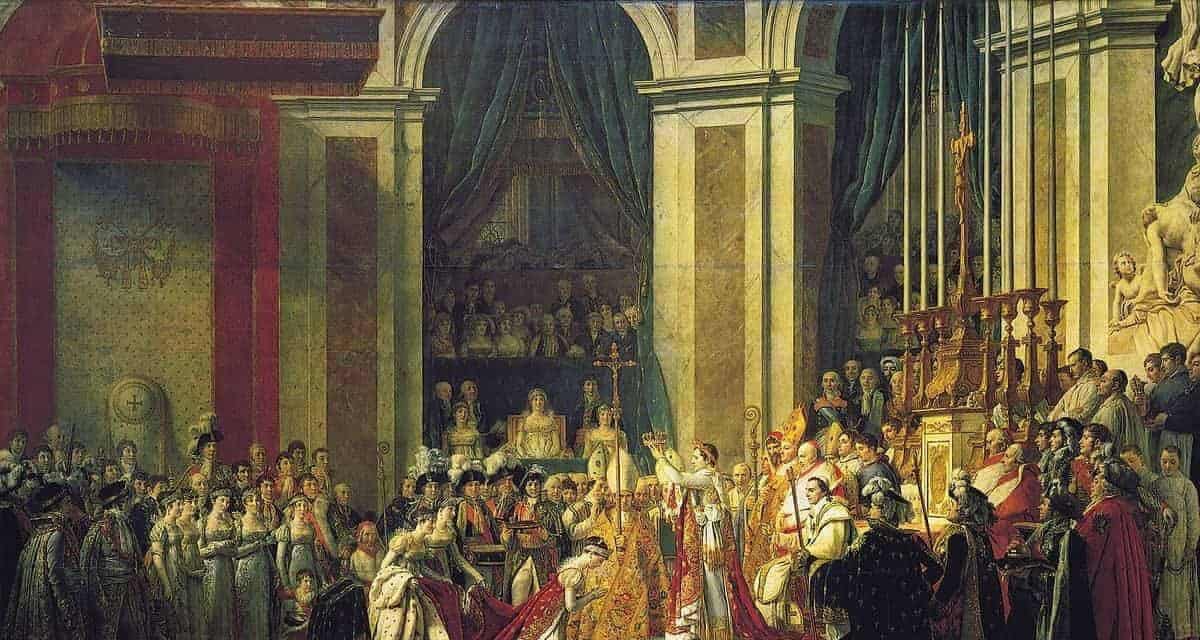 This Day In History: Napoleon Is Crowned Emperor (1804)

On this day in 1804 In the historic Notre Dame Cathedral in Paris, Napoleon Bonaparte is crowned Napoleon I, Emperor of the French. He is the first Frenchman to be crowned as Emperor in over a millennium. The ceremony was lavish and it was witnessed by thousands of guests, including Simon Bolivar, the great liberator of Latin America. Napoleon was only 35 years old. He was handed the crown by the Pope. Napoleon crowned himself Emperor a sign that he was independent of the Church and all other institutions. Napoleon has his wife crowned Empress and had the coronation painted by some of the greatest painters of his day. Many French people welcomed the return of the monarchy and they were tired of the turmoil and conflict of the Revolution. They wanted stability in France and believed that Napoleon could stabilize the country. Napoleon was able to secure the support of many conservative Catholics by once more recognizing the Catholic Church as the official Church in France. At this time Napoleon was probably the most popular man in France.

Napoleon was to prove one of the greatest leaders in French history and one of the world’s great generals. He was born in Corsica and had been educated in a French military academy. He rose rapidly in the ranks after the French Revolution. He had helped to repel an English attack on the key port of Toulon and suppressed a Royalist revolt in Paris. It was in Italy that he made his name. The French army was on the verge of defeat before he took command. He reorganized the army and he went on to inflict several decisive defeats on the Austrians and their allies. This left Napoleon master of Italy. Later he invaded Egypt and overthrew the Mameluke dynasty. He became the first Consul in 1800. Napoleon was a gifted organizer and an administrator and he introduced the Napoleonic Code, an enlightened law code that is still widely used in France today and influenced the law codes of many European nations. After his coronation, he won a great victory in 1805 at Austerlitz and by 1807 he was the master of all Europe after a series of victories. However, he made a fatal mistake when he invaded Russian. Instead of fighting the French army, they withdrew into the vastness of the Russian Steeps. Napoleon did capture Moscow but was forced to retreat as his supplies ran low and a brutal winter set in. During the retreat, the great Imperial Army disintegrated. Napoleon was later utterly defeated despite a brilliant defensive strategy. He was exiled to the island of Elba but escaped and seized control of France. His comeback was short-lived and he was defeated by the allies under Wellington at Waterloo in 1815.

Napoleon after his final defeat was exiled to the island of Saint Helena in the Atlantic Ocean. In 1821, he died, most likely of stomach cancer at the age of 51. His body was returned to Paris, where he was buried.