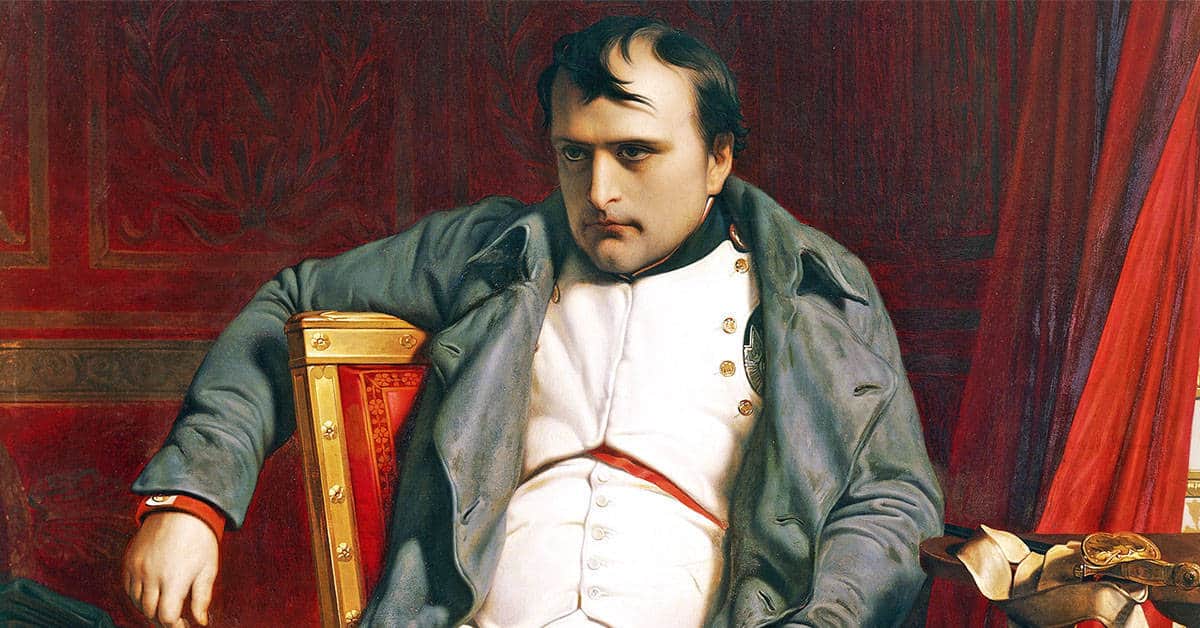 The Hundred Days is the term given to the period between Napoleon’s return from exile to the second restoration of King Louis XVIII. The entire period is actually 111 days, but it was an extremely busy time as it included the famous Waterloo Campaign, the Neapolitan War, and several other battles. In what proved to be Napoleon’s last stand, the former Emperor of France managed to raise an army one last time in an attempt to recapture past glories.

Napoleon had abdicated his throne on April 6, 1814, which paved the way for Louis XVIII to take the crown; it also led to the first Bourbon Restoration. Napoleon went to Elba but only remained in exile for just over nine months before he decided to come back and retake power. During his exile, the coalition forces that defeated him tried to redefine the borders of Europe at the Congress of Vienna which began in November 1814.

As Napoleon had anticipated, it was a difficult task since each of the major powers has its own set of conflicting demands. For example, Tsar Alexander of Russia wanted to absorb most of Poland, Prussia demanded Saxony, Austria wanted northern Italy (and didn’t want Russia or Prussia to get what they desired) and the Great Britain representative, Viscount Castlereagh, supported France and Austria and was at odds with his parliament. Matters became so tense that there was a possibility of war between members of the coalition at one stage.

While Napoleon was in Elba, he saw that the people of France were not happy about the once great empire dwindling. Also, there were numerous stories of Bourbon princes treating veterans of the Grand Armée poorly, and Louis XVIII was not a popular ruler. Napoleon took advantage of the situation by sailing towards France with a view to staking a claim to rule France again, resume his European conquest and liberate France from the allies. He landed at Cannes on March 1, 1815, with approximately 1,500 men and marched towards Paris immediately. Upon learning of the threat, Louis XVIII fled the capital on March 13 and Napoleon arrived on March 20.

Napoleon’s march to Paris was far from uneventful. He was warmly received when he arrived in France barring the Royalist stronghold of Provence. Napoleon decided to march through the Alps thus avoiding the enemy region. His small force was woefully insufficient at first, but the former emperor used his charisma to grow his original group into a formidable army quickly. He achieved this by promising free elections, political reform, and peace for French citizens. The growing tensions between the Royals and the lower classes had reached a breaking point, so Napoleon had timed his return perfectly.

Napoleon appeared at Grenoble a few days after leaving Cannes, and he rallied more troops behind him by claiming he would save the people from the slavery imposed on them by priests and nobles. A day after the 5th Infantry Regiment at Grenoble pledged allegiance to Napoleon; the 7th Infantry Regiment followed suit. When faced with the royalist 5th Infantry at Grenoble, Napoleon reportedly opened his coat and said: “If any of you will shoot his Emperor, here I am.” After a tense silence, a cheer went up: “Long live the emperor!”

His former commander, Ney, was sent to capture him and proclaimed that Napoleon should be brought to Paris in an iron cage. With 6,000 men, he was determined to carry out his mission, but when he faced Napoleon on March 14, he was overcome by emotion upon meeting his one-time leader and fell in line along with his army. By the time Napoleon arrived in Paris, his army had swelled. Within three weeks, Napoleon went from irrelevance to outright threat once again. The coalition had to set aside their differences and tackle the problem.

The War of the Seventh Coalition Begins

The Congress of Vienna declared Napoleon, an outlaw on March 13 which was officially the start of the War of the Seventh Coalition. Up to that point, Napoleon had hoped for a peaceful resolution, but now, war was inevitable. The Treaty of Alliance was ratified on March 25 and in it, the Great Powers of Europe agreed to join forces, and each of them had to pledge 150,000 men. This was a problem for Great Britain as its forces were scattered around the world. It got around the issue by pledging a smaller amount of men but paying subsidies to the other nations in the alliance.

Although the British and Prussian armies were ready by June, the invasion of France was planned for July 1 to give the Austrians and Russians time to assemble their men. In theory, it was a good plan as it ensured all allied armies were ready at the same time and could launch simultaneous attacks thus spreading Napoleon’s forces and gaining a quick victory. In practice, the delay allowed Napoleon to grow his army still further which made him an even more dangerous adversary.

Napoleon decided to attack first while the coalition armies were still not ready. The Prussians were at Liege while the British were in Brussels under the command of the Duke of Wellington. He comprehensively defeated the Prussians at the Battle of Ligny on June 16. He initially allowed the Prussians to flee, but when they fled in a different direction than he expected, he sent one-third of his men to finish the job. Meanwhile, on the same day, Ney fought to a stalemate with Wellington at the Battle of Quatre Bras. Although the fight was indecisive, Wellington was able to withdraw and take up a strong position at Waterloo.

After allowing part of his army to go after the Prussians, Napoleon took the rest of his men to Waterloo to face the British. He reportedly said that Wellington was a bad general, the British were bad soldiers and winning the battle would be like eating breakfast. In all likelihood, Napoleon was merely trying to instill confidence in his troops as there was a pessimistic feel around the camp.

At the start of the Battle of Waterloo on June 18, the French had 73,000 troops against the 68,000 man army of the British. Napoleon’s brother Jerome had heard rumors that the Prussians were on their way. However, Napoleon dismissed the possibility, claiming it would take two days for them to recover and General Grouchy would be able to handle them in any case. He delayed battle as he waited for the sodden ground to dry. Napoleon knew that moving cavalry and artillery on soft ground was a difficult process; the delay proved decisive. He responded to a 4 am dispatch from Grouchy and told him to follow the Prussians closely on the way to Wavre.

The battle began sometime between 10 am and 11.30am although Wellington wrote that the French launched a furious attack at ten o’ clock. At around 1 pm, Napoleon spotted part of the Prussian army at a village which was three hours march away. He sent a message to Grouchy which ordered the general to march towards Waterloo and attack the Prussians. However, Grouchy was carrying out Napoleon’s initial orders and was too far away to intercept the enemy. Napoleon tried and failed to break through the center of the allies and by 6 pm, the French were in serious trouble as the Prussians arrived en masse. Although Ney was performing admirably against Wellington by destroying enemy troops with artillery, Napoleon was unable to send troops to help as he was preoccupied with a 30,000-strong Prussian army attacking his flank.

By the time Napoleon was able to help Ney; it was too late as the British commander had got his defenses in order and repelled the attack. Within minutes, the allied army launched a huge attack and forced a chaotic French retreat. Napoleon left the battlefield while the Prussians turned the tables of a few days before by chasing after the fleeing French. Overall, around 41,000 French troops were killed, injured, captured or missing compared to allied casualties of 24,000.

Napoleon entered Paris and abdicated in favor of his son on June 22. He left France and surrendered to the British at the port of Rochefort. He wanted to go to the United States, but his enemies punished him by forcing an exile to the remote island of Saint Helena off the coast of Africa. An unhappy Napoleon was forced to accept his fate, and he died on the island in June 1821 after almost six years in exile. His cause of death was probably stomach cancer. Marshal Ney was even less fortunate; Napoleon’s trusted commander was executed by firing squad in Paris on December 7, 1815.