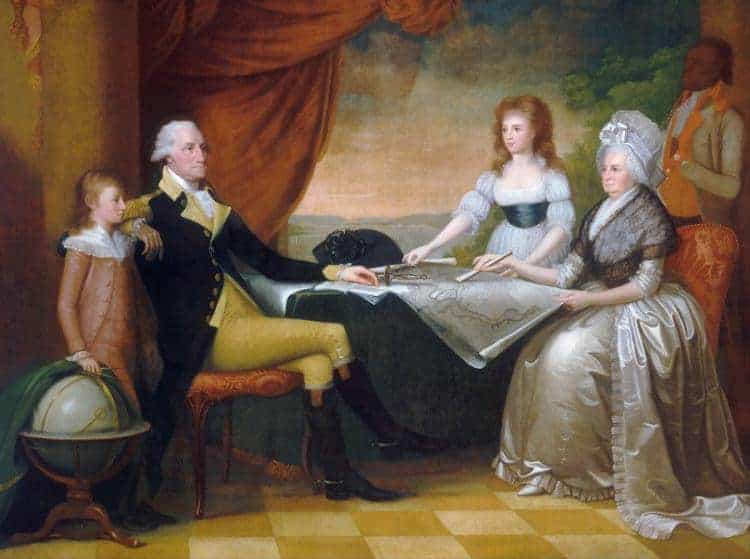 5. The Founding Fathers were not all fervent Christians but were rather predominantly Deists

One of the fundamental principles of American political society is the central role of Christianity, becoming almost a disqualifying issue to not follow the religion, with no individual elected to the White House without claiming to be an adherent. A position held particularly among the traditional conservative wing of the nation, in spite of the First Amendment’s unequivocal separation of church and state, it is widely held the nation was founded by devout believers and was intended to be a Christian country. This, however, is very far from the truth, with many of the Founding Fathers retaining contradictory or differing religious beliefs.

Explored in detail by David L. Holmes in The Faiths of the Founding Fathers, it is clear the religions of the Founding Fathers were diverse in both conviction and scope. Whilst some indeed were followers of Christianity, notably, Patrick Henry and John Jay, a preponderance of the grouping were, in fact, Deists. Including Thomas Paine, George Washington, Benjamin Franklin, and John Adams, these individuals, whilst not totally abandoning their Judeo-Christian heritage, categorically fell short of the standards of theism. This diversity and skepticism perhaps help to explain the Constitution itself, with the First Amendment ahead of its time concerning the exclusion of religion from public life.

4. Some believe the authors of the Declaration of Independence deliberately crafted a sinister document espousing freedoms

In contrast to public memory of the document, the bulk of the Declaration of Independence deals not with the rights and liberties of the people residing within the American Colonies but instead with the charges and indictments leveled against King George III. Whilst schoolchildren across the United States are persistently taught about the flowery language of the brief preamble – most famously the sentence on self-evident truths and equality – this tiny section is dwarfed by the twenty-seven charges brought against the British Crown, suggesting, in the minds of scholars, where the true meaning and import of the document rests.

As recognized by modern historians, the purpose of the Declaration of Independence was to provide a legal pretext for rebellion, not a discourse on rights. However, some conspiracy theorists go even further, suggesting the deliberate placement and over-exaggeration on the subject of freedoms and liberties – far exceeding the common opinion of the day and never truly enforced by the United States – was instead a sinister cover. Placing sufficient emphasis on lofty ideals, these arguments claim the Founding Fathers instead sought to concentrate as much power possible in the hands of a few but could not openly say so.

3. It has been argued the entire American Rebellion in the Colonies was designed by Jacobites to permit a return of the Stuarts to the British throne

Following the installation of George I as King of Great Britain and Ireland in 1714, over the better claims of more than fifty of his relatives who were disqualified for being Catholic, the reign of the House of Stuart was ended in favor of the House of Hanover. Terminating also the Jacobite belief in the divine right of kings, with Parliament instead selecting who would fill the vacant throne and not God, the political movement repeatedly sought to restore what they perceived to be the rightful Stuarts to their proper place. Culminating in failed uprisings in 1715, 1719, and 1745, as well as several more minor instances, the Jacobite cause has been connected to the American Revolution.

Failing to successfully provoke rebellion in Britain, repeatedly crushed in decisive fashion, following the disastrous defeat in 1746 and the end of Jacobitism in Great Britain it has been alleged adherents entered into a protracted conspiracy designed to weaken the British Crown prior to a renewed effort. Supposedly responsible for provoking the seismic unrest throughout the American Colonies in the years preceding the revolution, in a manner similar to conspiracy theories involving ulterior French designs, it has been argued that Jacobites orchestrated the American Revolution in order to provide more fertile grounds in Europe for their seditious activities.

2. It has been claimed the Alien and Sedition Acts were introduced to combat the Illuminati and prevent a hostile takeover

As previously mentioned, the Alien and Sedition Acts – signed into law in 1798 under President John Adams and supported by the Federalist Party – were among the most controversial elements of early American history. Granting the government sweeping and authoritarian powers to prosecute political dissenters, as well as foreigners, the acts were widely unpopular and denounced as tyrannical. Although mostly repealed following the Democratic-Republican victory in 1800, albeit with the Alien Enemies Act surviving to this day, some conspiracy theorists have argued this endurance exhibits the true intended purpose of the legislation.

Extending the residency requirements from five to fourteen years to acquire naturalization, both the Alien Friends and Alien Enemies Acts afforded the government broad powers over non-citizens and new arrivals to the United States. Tapping into (spurious) allegations concerning the Illuminati, it has been alleged the intended purpose of these bills were to deny the secret society the capacity to become entrenched in North America. Through these harsh anti-immigrant powers, it is reasoned the federal government carefully pruned incoming migrants to weed out subversives and deport members of the Illuminati before they could become a danger to the fledgling republic.

1. Thomas Jefferson was almost certainly not a leading member of the already discontinued Illuminati

One of the most prominent and acclaimed faces of the American Revolution, the achievements of Thomas Jefferson are almost beyond measure. Minister to France, the inaugural Secretary of State, both Vice President and President of the United States, as well as the principal author of the Declaration of Independence, founder of the University of Virginia, and savior of the Library of Congress, Jefferson unquestionably deserves his position on Mount Rushmore. In spite of, and perhaps precisely because of this visibility, Jefferson has equally become the subject of more conspiracy theories than virtually any other American politician in history.

Supportive (and least initially) of the French Revolution, spending also several years in Europe in his capacity as one of America’s first overseas ambassadors, one of the more common conspiratorial rumors regarding Jefferson is that he was himself a leading member of the Illuminati. Allegedly joining the group during this time abroad, these uncorroborated and nonsensical arguments seek to connect his subsequent rise to prominence to sinister and shadowy influences. It should be noted, however, that one conspiracy theory – that Jefferson fathered children with one of his slaves – has since been proven to be true, although his involvement with the defunct Illuminati remains less likely to follow suit.

“The Many Faces of Alexander Hamilton: The Life and Legacy of America’s Most Elusive Founding Father”, Douglas Ambrose and Robert W.T. Martin, New York University Press (2006)

“Defiance of the Patriots: The Boston Tea Party and the Making of America”, Benjamin L. Carp, Yale University Press (2010)

“The Eagle and the Shield: A History of the Great Seal of the United States”, Richard Shape Patterson and Richardson Dougall, United States Government Printing Office (1978)

“The Story of the Declaration of Independence”, Dumas Malone, Oxford University Press (1975)

“The Declaration of Independence: The Evolution of the Text”, Julian P. Boyd, University Press of New England (1999)

“The Declaration of Independence: An Interpretation and an Analysis”, Herbert Friedenwald, Wentworth Press.