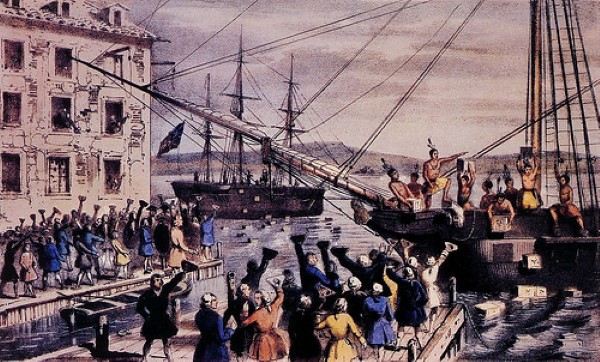 There was no single tipping point that kicked off the American Revolution. In fact, even as late as 1775, the colonists were still trying to avoid a war. The Olive Branch petition was sent to Britain in July of 1775 and was a last-ditch attempt by the colonists to reason with the British Monarchy. Specifically, the colonists wanted representation in Parliament.

Over time, the British government continued to alienate the colonists, who had no representation in Parliament. Britain, which was suffering financially from continued wars with France, passed several laws over the course of 20 years that taxed American colonists for essential goods and services.

On this day in 1773, the British Parliament passed the Tea Act, which would significantly lower taxes on tea that came from shippers owned in the UK. This granted the company, The East India Company, a monopoly on tea since they could sell it so much cheaper than anything else that the Americans could bring in (importing tea from places other than Britain was made illegal).

In 1767 the British government passed the Townshend Acts, a series of acts that were meant to raise incoming revenue from the American colonies. The Townshend Acts may be the most controversial laws that Britain ever passed during this period, as the colonists fiercely protested England’s right to tax the colonies without proper representation.

This would lead to the British sending troops to the colonies, and later the occupation of Boston in 1768. It would also lead to the Boston Massacre in 1770, where 5 people were killed and 6 were injured when British troops fired on a mob in downtown Boston.

Eventually, most of the Townshend Acts would be repealed, but the colonists continued to protest England’s ability to tax without representation. This is where the Tea Act of 1773 comes in. The Townshend Acts had a significant impact on the import of tea, and those taxes on tea were one of the few acts that weren’t repealed. When the Tax Act was passed, giving the colonists cheaper tea, the leaders of Parliament thought to trick the colonists into accepting those taxes, thereby confirming Britain’s ability to tax the colonies.

Needless to say, the Tax Act only further angered the colonists. They would protest the Tea Act in December of 1773 in what would become one of the most famous protests in history: the Boston Tea Party. The Boston Tea Party was just a small part of an effort by the colonists to protest the Tea Act. Merchants, artisans, and smugglers alike used numbers to harass members of the East India Company and to prevent tea shipments from being delivered.

The British did not take these protests well. They would pass the Coercive Acts that would seriously impose their military presence on Massachusetts, and would make all British officials immune from criminal prosecution. This would lead to the First Continental Congress and the first American efforts at a unified resistance.