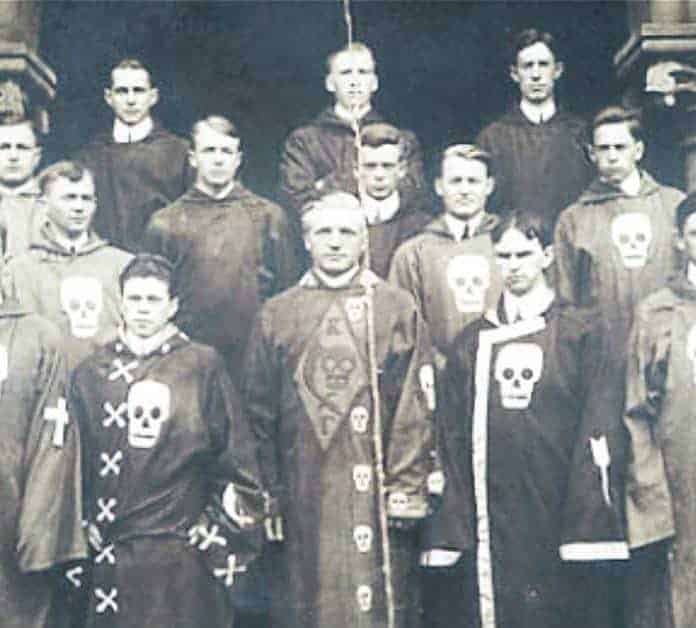 We all love a secret. There can be few better feelings than knowing something that everyone else doesn’t, so it stands to reason that over the years, groups have formed that create mythologies based around the keeping and creating of secrets. Whether they be malicious in nature or simply clubbable, we are fascinated by secret societies and the clandestine activities with which they fill their time.

Over the last millennia, societies have formed that purport to hold the secrets of the world in their grasp. On our list you will find the Freemasons and the Rosicrucians, who used their knowledge to further the ambitions of their own members and the Knights Templar and the Assassins, who used their knowledge of banking and violence respectively make themselves all powerful and indeed, to precipitate their own downfall.

You will find religious sects like Opus Dei, closed off the the world, and the Hermetic Order of the Golden Dawn, who claimed to hold magical powers alongside political groups such as the Black Hand and the Carbonari, who made real gains to change the map of the world as we know it today. Finally, we will cover the modern day conspiracy theory favourites of the Illuminati, the Bilderberg Group and the Skulls & Bones society, who shape that modern world, or don’t, depending on your point of view. Let us talk you through the misty world of secret societies: just remember not to tell anyone else about it…

When we’re dealing with secret societies, perhaps it is best to start with least secret of them all. After all, everyone has heard of the Freemasons, they’re active in most Western countries and by conservative estimates can boast somewhere in the region of 5 million members worldwide. Their members are generally open about their membership, their meeting points are not hidden and they even do public charity drives.

So far, so golf club. The difference of the craft, as some masons refer to their organisation, is that what they do as a group, their codes and their internal rules are completely opaque and secret. This, allied to the highly influential nature of their membership, has often seen them cast as a benign force in the community, a self-interested group that helps its own member get on in life at the expense of others. When such a group of influential people meet in secret and make oaths to each other in secret, then the rest of us tend to become suspicious.

The origins of Freemasonry were far more innocuous. The mason part of freemasonry derives from their beginnings as a secret society of stone masons, whose professional knowledge was required to be secret for their profession to exist. Those skilled in masonry could not go out and share what it was that they did to build stone buildings, for if they did, everyone would know how to do it and their trade would swiftly become obsolete. If you knew how to plumb your own toilet, you’d never call a plumber again. At its very inception, the Freemasons were more like a labor union than a secret society.

The development of the society, however, moved them into murkier territory. When individual groups of Masons amalgamated in the earth 18th century, their influence grew exponentially and they spread across Europe and along the lines of the British Empire. The high status of some Masons, the shady nature of their activities and the legion of clandestine connections between members lead those outside the organisation to fear, suspect and accuse Freemasonry of everything from being a seperate religion, a Satanic cult and a secret world government.

14 US Presidents have been Masons (the most recent was Gerald Ford) including George Washingto and John Hancock. In the United Kingdom and particularly Scotland, Masons are seen as a group that controls aspects of the judiciary and the high levels of the police, particularly by the Irish community, who rank it along with non-secret groups such as the Orange Order as anti-Catholic organisations. Indeed, while membership is theoretically open to Catholics, the Church itself has repeatedly condemned Freemasonry and threatens anyone who joins with excommunication.