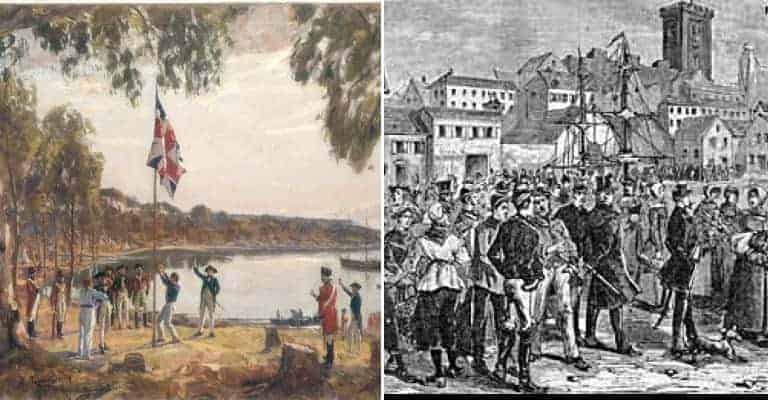 11 – New South Wales had its own penal colony – Norfolk Island

“The flogger was a County of Clare man a very powerful man and [he] took great pleasure in inflicting as much bodily punishment as possible, using such expressions as “Another half pound, mate, off the beggar’s ribs.” His face and clothes usually presented an appearance of a mincemeat chopper, being covered in flesh from the victim’s body. Major Foveaux delighted in such an exhibition and would show his satisfaction by smiling as an encouragement to the flogger. He would sometimes order the victim to be brought before him with these words: Hulloa you damn’d scoundrel how do you like it? and order him to put on his coat and immediately go to his work” Convict Robert Jones

What is to be done to those already in a prison who offend further? In New South Wales, the death penalty was ever present as an option, and one that was regularly used, but the colony could not simply execute everyone. Instead, they had a second option: Norfolk Island. What better way for a society constituted from those sent as far as possible away from one country because of criminality to deal with its criminals than to transport them again, to somewhere even more isolated?

Norfolk Island is some 900 miles to the east of New South Wales, a drop in the Pacific Ocean almost directly in between Australia and New Zealand. It had been occupied by Polynesians but, when it was sighted by Captain Cook, and when he landed it was totally empty. When Captain Phillips returned with the First Fleet, he despatched a ship to the island almost immediately. As mentioned elsewhere, it was a major plan for the new colony in the Antipodes to source valuable pines and flax from Norfolk Island, but when that was swiftly proved to be impossible, a penal settlement was established.

It was renowned for violence, particularly as meted out by one Joseph Foveaux, the administrator. He was a stickler for rules and hellbent on making Norfolk Island into a place of order, with little compassion or care for anyone who stood in his way. Stuck on a rock miles from any form of oversight, he was allowed to indulge his love of discipline to the full. Men were flogged into line and hard work was enforced on all, with convicts breaking rocks from dawn until dusk to create bricks for their own jail. All who complained were whipped. 200 lashes was the standard punishment, with a bucket of salt water tipped over the open back the only medical treatment afforded. There were many tales of convicts deliberately committing crimes so that they could be sent back to Sydney for trial – anywhere but Norfolk Island.

For all Foveaux’s efforts, the first penal colony failed – it was too isolated from Sydney – and the island returned to being uninhabited in 1814. In 1825 a second prison was created with the intention of it becoming a jail for the now large New South Wales. Its isolation was now a strength, and those imprisoned there were thought to be the most recidivist from the Sydney settlement. Ralph Darling, Governor of New South Wales between 1825 and 1831, described it as “as a place of the extremest punishment short of death” while his counterpart in Van Diemen’s Land, George Arthur, remarked that “when prisoners are sent to Norfolk Island, they should on no account be permitted to return. Transportation thither should be considered as the ultimate limit and a punishment short only of death”.

Norfolk Island would survive until 1855, when its inhabitants were moved to a similar facility at Port Arthur in Van Diemen’s Land. It would soon find new people, however, in the form of the Pitcairn Islanders. Pitcairn had been populated by the crew of the Bounty, who had mutinied against their captain and set up on the isolated island, before moving en masse to Norfolk. To this day, the majority of the population of Norfolk Island are their descendants.

From city hall to cottage,
O’er all our island homes,
Ring round your benediction!
The Unstained Future comes!”
The Hobart Town Daily Courier, 1853

As the colony grew, the numbers of free settlers from Britain, Ireland and other countries began to increase. Within 30 years of the landing of the First Fleet, Sydney had grown from an outpost clinging to the side of a continent to a viable colony, fully capable of sustaining itself. In short, it was no longer necessary to force people to go there to keep it going.

It was becoming increasingly obvious that Australia was fruitful and held rewards for those willing to make something of the opportunities there. When convicts came to the end of their sentences, they would take over land and farm it, producing notable profits and generating economic activity – though crucially, they did not own the land on which they were farming. There was an obvious incentive for many poor people in England to migrate to Australia and make something of themselves in the new land, something which the New South Wales colonial government was enthusiastic to promote. By the time of the cessation of transportation to New South Wales in 1840, almost a third of those who came to Australia were coming of their own volition.

The mood in the colonies, too, had changed. The newly prosperous middle classes that had sprung up in the cities objected to the association with criminality – though they were never bothered by the brutal nature of convictism – and campaigned for abolition. It was granted in 1846 across all colonies, but was soon reinstated as the prisons of England immediately began to fill again. The Australians – no longer British colonists – were outraged and the protests against transportation sparked up again.

The last ship would sail for Botany Bay in 1853, by which point gold had already been struck in Victoria. Amid the floods heading for the goldfields, the final detachment of convicts paled into insignificance. From just one ship a year in the first decade to a peak of 36 ships and 7,000 people in the peak year of 1833, a major swath of British society had been uprooted and rehoused in Australia. Across the whole period of transportation, around 150,000 people were sent from the British Isles to the other side of the world against their will. Those sent, exiled from their homes, torn from their families and everything they had ever known, would become the bedrock of a new society.

The vast majority stayed in Australia when their sentences were served. To this day, an estimated 20% of all Australians have convict ancestry and the perceived stain carried by a convict heritage has largely dissipated. Even John Howard, Australian Prime Minister between 1996 and 2007, was the descendant of convicts, and to many Australians, their heritage as the criminal class of Britain is taken as an ironic source of pride, a vindication of the anti-authoritarianism and larrikin spirit of their nation.