20 Of The Wealthiest Individuals Throughout History 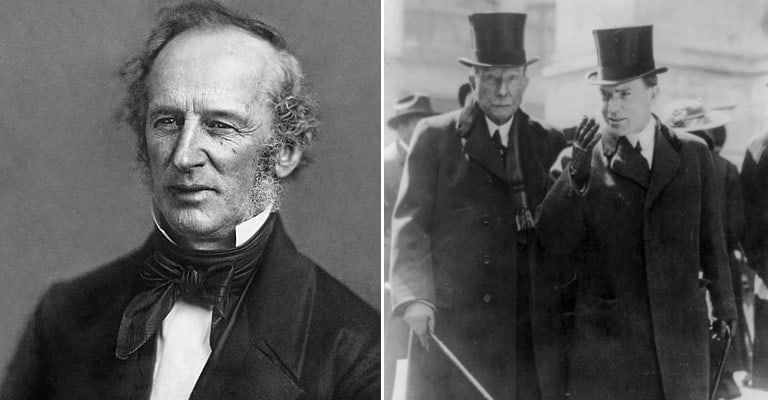 20 Of The Wealthiest Individuals Throughout History

5. The last of the Russian monarchy, presiding over the fall of the Romanov dynasty, Nicholas II nevertheless accrued a peak personal fortune of approximately $300,000,000,000.

Nicholas II, also known as Nicholas the Bloody, was the last Emperor of Russia, reigning from 1894 until his forced abdication in 1917. Born in 1868, his father, Alexander III, failed to prepare his son for the throne, believing that he had decades longer to introduce Nicholas to governing. Inexpert and untrained, the reign of Nicholas II was fraught with political and military turmoil. Losing the Russo-Japanese War of 1904-1905, during which the Russian Baltic Fleet was embarrassingly destroyed, Nicholas was forced to violently suppress the 1905 Russian Revolution. Entering World War One, Russia’s performance remained dire.

Losing an estimated 3.3 million Russian soldiers, Nicholas was held personally responsible. After the February Revolution of 1917, Nicholas was compelled to abdicate on behalf of the entire House of Romanov and was taken into custody. Following the October Revolution, which brought the Bolsheviks to power, the imprisoned royal family were executed in July 1918. Despite an ignoble end, Nicholas II, through his capacity as Emperor of All Russia, amassed a vast personal wealth prior to his downfall. Modern estimates place his fortune in 1916 in the vicinity of three hundred billion in 2018 terms.

4. Born into an impoverished Scottish family, Andrew Carnegie rose to become the wealthiest man in America with an equivalent net worth of $375 billion.

Andrew Carnegie (b. 1835) was a Scottish-American industrialist and business magnate, remembered in particular for leading the expansion of the American steel industry in the late 19th century. Born in Dunfermline, Scotland, into a working-class weaving family, at the age of thirteen Carnegie emigrated to the United States with his parents out of desperation due to starvation and economic depression. Joining his father at work in Allegheny, Pennsylvania, the pair worked twelve hours per day, six days per week, earning less than two dollars per week each. Employed as a telegraph operator by the Pennsylvania Railroad Company in 1853, Carnegie’s rapid rise soon followed.

Becoming superintendent of the Western Division by 1858, Carnegie invested nearly all of his earnings into the booming railways, in so doing multiplying his stake many times over. By the 1860s, Carnegie had earned enough through smart speculative investments, including in oil farms, to enter the ironworks industry. His greatest accomplishment, in 1892 Carnegie founded his eponymous steel company, selling it just nine years later for over three hundred million dollars. Donating vast sums to charity, founding thousands of local libraries, Carnegie’s peak wealth, during which time he was briefly the wealthiest man in America, reached the equivalent of $375,000,000,000.

John Davison Rockefeller Sr. (b. 1839) was an American oil tycoon and industrialist during the late-19th and early-20th centuries. Born into an unremarkable family, John, along with his brother William and friend Samuel Andrews, founded Rockefeller & Andrews in their early 20s to attempt to break into the oil refining business. Growing and expanding respectably, in 1870 Rockefeller founded the Standard Oil Company. Profiting from the soaring costs of gasoline, Standard Oil, through highly unsavory and ruthless business strategies, successfully created a virtual monopoly over the American oil industry.

Controlling at its peak more than ninety percent of all oil in the United States, Standard Oil was ordered dismantled into thirty-four separate components by the Supreme Court in 1911 due to anti-trust violations. Although opening up the oil industry, this separation financially benefited Rockefeller, whose personal shares in the new spin-off companies, such as ExxonMobil and Chevron, exploded in value. Becoming the wealthiest man in America and the first billionaire in the nation’s history, Rockefeller’s peak net worth came just two years later in 1913, valued at $409,000,000,000 when adjusted for inflation.

2. Musa I of the Mali Empire – the leading producer of gold – became so inordinately wealthy that during a pilgrimage to Mecca he donated more than 24 tons of gold to the poor without care.

Musa I, also known as Mansa Musa, was the tenth Sultan of the Mali Empire, reigning from 1312 until his death in 1337. Ascending to the throne due to the customs of the Sultanate, Musa, despite not being the son of his predecessor, Abubakari Keita II, was appointed deputy in his absence during a royal expedition to explore the Atlantic Ocean. Never returning, with Abubakari believed to have been lost at sea, the thirty-two-year-old Musa was crowned in his place. Inheriting the empire, among the many titles bestowed on Musa was Lord of the Mines of Wangara, with his new domain the largest producer of gold in the world.

Displaying his wealth during a flamboyant pilgrimage to Mecca in 1324, Musa journeyed to the holy city with 12,000 slaves each carrying almost two kilograms of gold bars and eighty camels carrying each three hundred pounds of gold dust. Dispersing this incalculable wealth to the poor along the route, Musa ordered and financed the construction of a new mosque upon his location each Friday during his travels. Possibly the wealthiest individual to have ever lived, Musa’s projected wealth, although difficult to calculate, is estimated to have been equivalent to around $415,000,000,000 today.

1. Potentially the wealthiest man in history and the first trillionaire, according to biblical sources, King Solomon amassed a gigantic fortune during his 39-year reign as King of Israel.

Solomon, also known as Jedidiah, is a biblical King of Israel believed to have reigned between 970 and 931 BCE. The son of King David, and the third king of the United Monarchy, Solomon, per his father’s instructions, initiated his reign at the age of fifteen with a political purge to consolidate his position. Expanding his military strength, Solomon is credited with the creation of favorable trade relations with neighboring nations, in particular, the Phoenicians. Following his death, the United Monarchy quickly dissipated, with the Israelites splitting between the northern Kingdom of Israel and the southern Kingdom of Judah.

Regarded as the wealthiest of the Israelite kings that appear in the Bible, multiple stories make reference to the vast fortune of Solomon. Using this wealth to build the First Temple, treasure hunters have spent centuries attempting to relocate his horde, believed to have been lost during the Babylonian capture of Jerusalem in the 6th century BCE. According to the Book of Kings, Solomon received as much as twenty-five tons of gold in tribute in each of his thirty-nine years in power, in addition to general taxation. Using modern projections, historians have calculated that, if such claims are indeed true, Solomon would have enjoyed an equivalent net worth of $2,200,000,000,000.

“The History of Richmond, in the County of York”, Christopher Clarkson, Nabu Press (2011)

“Wheels for the World: Henry Ford, His Company, and a Century of Progress, Douglas G. Brinkley, Viking Adult (2003)

“The Richest Man Who Ever Lived: The Life and Times of Jacob Fugger”, Greg Steinmetz, Simon and Schuster (2015)

“The Court of the Last Czar: Pomp and Pageantry in the Reign of Nicholas II”, Greg King, John Wiley and Sons (2006)

“He’s African! How The Richest Man Ever Earned And Lost His Huge Fortune”, By Mirror, The Saturday Standard

“David and Solomon: In Search of the Bible’s Sacred Kings and the Roots of the Western Tradition”, Neil Asher Silberman, Free Press (2006)