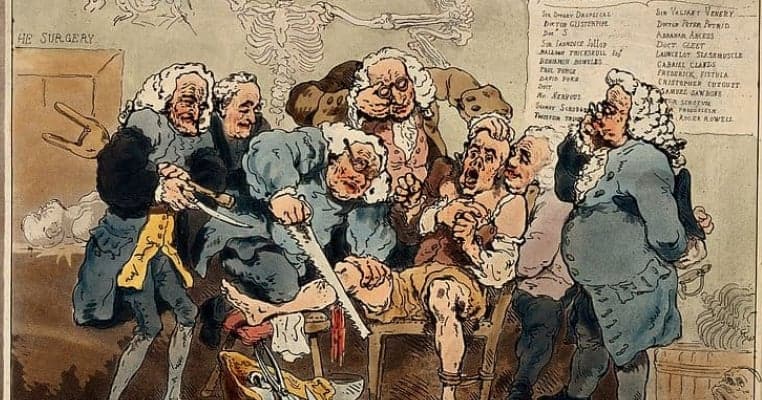 5. Surgeons would often fight among themselves, with many violently opposed to the idea that they should wash their hands!

As if being a patient in the 19th century wasn’t bad enough, Victorian hospitals were often run by egocentrics, with fighting among vain surgeons commonplace. And, as the century progressed, one topic divided opinion more than any other: that of germ theory. In the UK, the main proponent of antiseptic surgery – which included calling for surgeons to ‘scrub up’ – was Dr. Joseph Lister. Working at the Glasgow Royal Infirmary in Scotland, he demanded that his colleagues use carbolic acid to sterilize their equipment and to clean wounds so as to reduce the hospital’s shockingly-high mortality rates.

Unsurprisingly, many of his fellow surgeons didn’t like being told what to do. Dr. Lister made many workplace enemies – and there’s plenty of evidence to suggest that this professional difference of opinion cost patients’ lives. For instance, the American surgeon, Dr. Samuel Gross, was one of Lister’s fiercest critics and would deliberately ignore the Scot’s advice. The records show he would simply close the door of his operating theater and declare: “There! Mr. Lister’s germs can’t get in anymore.” Then, as one famous painting shows, he would perform surgery while still wearing his dirty street clothes and would stick his unwashed hands into open wounds.

4. There was no such thing as privacy and many operating theaters were packed full of students and even gore-loving members of the public.

According to the medical historian Lindsey Fitzharris – author of The Butchering Art ­– operating theaters were sometimes known as “gateways of death”. But, far from keeping people away, such a morbid moniker actually attracted huge crowds. Indeed, most surgical operations were public events, and some of the Victorian era’s leading surgeons would draw massive crowds, especially in London. It wasn’t just fellow surgeons who would be keen to watch the gory action. Medical students and even members of the public would also crowd the floor hoping to see blood and guts. Some hospitals even have special ‘theaters’, with crowds of seats above looking down on the operating table.

Of course, this was highly dangerous. The records show that surgeons sometimes had to battle for space with the crowds. Such distractions undoubtedly cost limbs, and probably even lives. However, the biggest risk came from the dirt and the germs such crowds brought into the operating theater with them. For much of the century, nobody washed before going into a hospital and almost everyone kept their street clothes, including their dirt and grime-covered overcoats, on when they watched an operation. Even despite the warnings of the pioneering Dr Liston, this continued right up until the end of the 19th century, meaning many patients lost an arm but got a deadly infection.

3. It wasn’t just grim for the patients; spare a thought for the poor surgeons of the 19th century who had to endure blood, guts and death on a daily basis.

Surgery wasn’t just traumatic for the patients. It was also highly demanding for the surgeons themselves, in more ways than one. For starters, surgeons needed to be physically fit and strong, mainly so that they could hold their patients down. Robert Liston, famed for his extra-quick amputations, towered above his colleagues, standing six foot two, and he was said to use one his huge arms to clamp a flailing limb down while using his free hand to saw it off. However, having a strong arm wasn’t enough. A surgeon needed to have a strong stomach too. Many trainees simply couldn’t handle it and passed out whilst watching experienced surgeons at work.

Silas Weir Mitchell, was one of America’s most influential physicians and made a name for himself as a pioneer in the field of neurology. As a young man, however, he wanted to become a surgeon – that is, until he witnessed the gruesome reality of an operating theater for himself. In his memoirs, Mitchell recalled a female patient under the knife. In particular, he remembered “the terribleness, the screams, the flying blood jets”. Like many other young men, Mitchell quickly abandoned his careers plans, preferring the relative calm of a physician’s life instead.

2. The indignity didn’t end if you died on the operating table – your body may have been used for dissection by inept medical students.

The gruesomeness of Victorian-era surgery didn’t even end with the death of a patient. As if the indignity of being cut open, screaming in agony due to a lack of proper anesthetic and then bleeding to death on an operating table in front of a crowd of students and passers-by jostling for a better view of your demise wasn’t bad enough, your dead body would then be cut open some more. In England, the passing of the Anatomy Act of 1832 made digging up corpses a criminal offence. So medical surgeons and anatomy professors had to look elsewhere for specimens – and those poor individuals who never made it out of surgery alive offered the perfect solution.

From the late-1870s onward, advances in embalming meant that bodies could be stored for several months before being used for anatomy classes. These cadavers would also be used for practicing surgical procedures – again, often in front of baying crowds. Though grim, significant advances were made during the 19th century, especially when it came to understanding anatomy. In 1858, the first edition of Henry Gray’s book Gray’s Anatomy was published. The work, which is still referred to today, was based on the dissection of dozens of unclaimed bodies from London’s mortuaries and workhouse morgues.

1. It may still have been brutal and risky, but surgery in 1900 was a long way from the grim realities of surgery in 1800

In the field of surgery, as with medicine in general, a lot of progress was made over the course of the 19th century. Indeed, you’d be far happier going under the knife in 1900 than you would in 1800. Above all, thanks to the pioneering work of Joseph Lister in particular, doctors became increasingly aware of the risks posed by infections. Significant progress was made in the area of antiseptic surgery, with surgeons coming round to the idea of sterilizing their tools and scrubbing their hands before performing any operation. What’s more, advances in anesthesia allowed surgeons to perform longer and more complex operations.

By the 1890s, surgeons were wearing clean white robes rather than simply covering their everyday clothes with blood-stained aprons. And surgical instruments had become better, too. Wooden-handled saws had been replaced with saws made out of a single piece of steel, significantly reducing the risk of germs. In operating theatres, watching audiences were out and smooth, easily-cleaned surfaces were in. So, when the Spanish-American War of 1898 broke out, American hospital ships were clean, well-equipped and even fitted with X-ray machines – advances that undoubtedly saved the lives of countless soldiers.

“The Gruesome, Bloody World of Victorian Surgery.” The Atlantic, October 2017.

“How to amputate limbs without fainting: the trials of a Victorian surgeon.” The Telegraph, December 2015.

“How Ether Transformed Surgery From a Race Against the Clock.” Scientific American, October 2017.

“Brought to life. Exploring the History of Medicine: Anaesthesia.” The Science Museum, London.

“Screams, torture and so much blood: The gruesome world of 19th century surgery.” Washington Post, October 2017.