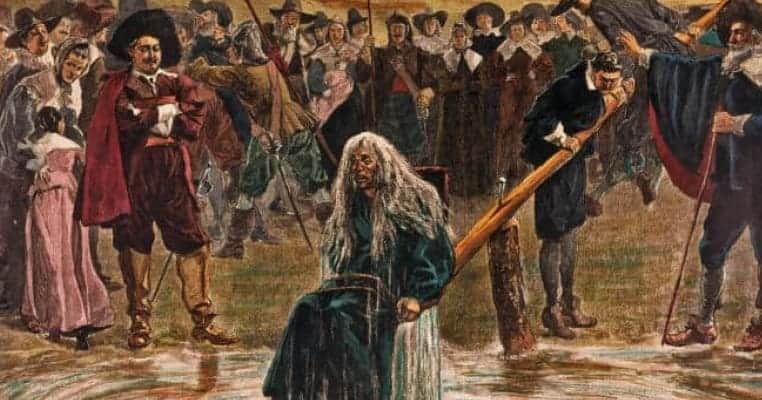 3. You forgot to throw out old dairy products: Believe it or not, curdled milk was offered up as evidence that women were witches

Quite where the idea that witches caused milk to curdle has never been firmly established. However, scholars of the history of witchcraft have found this mentioned in texts dating back to the start of the 16th century. For instance, there was the old English tale of â€˜Old Mammy Red or Marblehead’, who could curdle milk as it came out of a cow and could even then magically transform it into blue wool. And like many such superstitions, such a belief was brought across the Atlantic to the Americas by Pilgrim settlers. Before long, America’s witch-hunters were busy looking in people’s pantries, looking out for tell-tale signs of spoiled dairy.

The most notable case of curdled milk being cited as evidence of black magic was at the Salem Witch Trials in 1692. Here, the grand jury heard that several of the accused had spoiled milk in their houses, while neighbors also attested that some of them caused milk to curdle just by walking past it. It must be remembered that this was a time when many families relied on their cows to survive. Should a cow stop producing milk, or should the milk be of poor quality, it could leave a person or family on the brink of destitution and starvation. It would also leave them angry and looking for someone to blame – and often, a â€˜strange’ female neighbor was the easiest target.

2. You had a reputation for being argumentative: Nobody liked or trusted an assertive woman back in the 16th and 17th centuries

If being an independent woman was enough to set tongues wagging at the height of â€˜witch hysteria’ in the 16th and 17th centuries, then being assertive and argumentative was almost guaranteed to get you labeled a witch. While men might have been able to get away with arguing with their neighbors, women could not – especially those who lived alone, without a man to â€˜control’ them. Being drunk and disorderly was no excuse, nor was being in an abusive relationship – as Rachel Clinton found out to her cost in Salem in 1692.

Clinton, who was in her 60s when she was accused of being a witch – more specifically, she had been blamed for making a child’s elbow blame, and even for making a man’s beer go bad – was destitute and somewhat eccentric. The prosecutors at the Salem Witch Trial directly linked her argumentative nature with the practice of black magic. They told the grand jury: “Did she not show the character of an embittered, meddlesome, demanding womanâ€”perhaps in short, the character of a witch? Did she not scold, rail, threaten and fight?” In the end, Clinton was released after several months in jail. She died soon afterward, alone and with her reputation in ruins.

1. You had made enemies: In many cases, people were accused of being witches by neighbors bearing grudges and seeking revenge

Sometimes – quite often, in fact – men or women did nothing to give the impression they might be witches. However, at the height of the witch hunts of the 16th and 17th centuries, just an anonymous accusation might be enough to get someone hauled in front of a grand jury and tried for witchcraft. Indeed, there are plenty of examples where unfounded accusations were made against neighbors, former friends or even family members. Sometimes they were made in order to deflect attention away from someone else. Or sometimes an argument got out of hand or a love affair turned sour – and a woman would end up being labeled as a witch.

The last person to be executed for witchcraft in Switzerland, for instance, did nothing worse than bring a love affair to an end. Anna Goldi had embarked on an affair with a rich politician whilst employed as the family nanny. When she brought the affair to an end, the powerful man denounced her as a witch. He even claimed that she had used black magic to make his daughter suffer from convulsions. She was also accused of talking with the devil. Perhaps unsurprisingly, Goldi â€˜confessed’ to all charges – though only after she had been strung up by just her thumbs – and she was executed soon after.

“A Brief History of the Salem Witch Trials.” Smithsonian.

“The history of witch hunts in America and Europe.” The Washington Post, October 2017.

“Five myths about the Salem witch trials”. The Washington Post.

“How the Germans went crazy for witch hunts.” The Local Germany, May 2014.

“What Caused the Salem Witch Trials?” History of Massachusetts Blog.

“Last Person Executed as a Witch in Europe Gets a Museum”. Smithsonian Magazine.