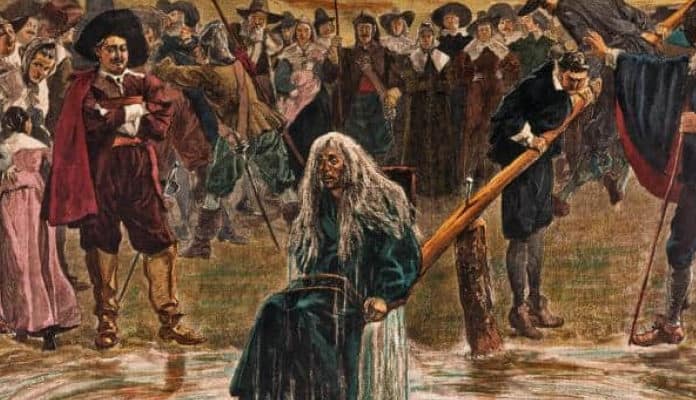 Between the 16th and 18th centuries, a moral panic spread through large parts of Europe and North America. People were seeing witches everywhere. Even the slightest problem was blamed on witchcraft, from a horse falling lame to a child falling ill. As the panic spread, self-proclaimed experts issued guidance on how to identify witches. They also issued guidance on what was to be done with anyone found guilty of practising bloodshed – not for nothing is this period also known as the ‘Burning Times’.

Nobody knows for sure how many people were accused of being a witch during this time. However, it’s estimated that as many as 60,000 people were executed for witchcraft in Europe alone. Similarly, in North America, Puritans feared that there were many amongst them who were worshipping the Devil. Farcical trials were held, sometimes involving dozens of suspects. Most famously of all, the Salem Witch Trials saw more than a dozen innocent people executed after they were blamed for making some young children suffer seizures.

So, how did the people of this time identify witches in their midst? Here we have 18 signs witch-hunters might have seized upon, some more bizarre than others:

18. You were a woman: Simple sexism was behind many accusations of black magic, and 3 in 4 people put to death for being witches were female

Plenty of men were accused or sorcery during the so-called ‘Burning Times’, or the witch trials that swept across Early Modern Europe. However, women were much more likely to be accused of being a witch. What’s more, they were also more likely to be executed for allegedly practicing black magic. According to the most accounts, around 75% of all the people executed for witchcraft in Europe between the years 1580 and 1630 were women. However, the actual proportion might have been higher still since women were less likely to be given a fair trial than men were. Thousands more innocent women may have been killed by mobs, with their deaths never recorded.

This gender bias was all too evident at the Salem Witch Trials in colonial Massachusetts in 1692. There, the vast majority of the 200 people accused of sorcery were female. Moreover, of the 19 people who were put to death, 14 were women. This was merely a symptom of a highly-patriarchal society. Puritans took the story of Adam being tempted by Eve as literal fact. Moreover, women who were independent or self-educated were viewed with suspicion and made for convenient scapegoats when things went wrong, such as when a harvest failed or livestock died.