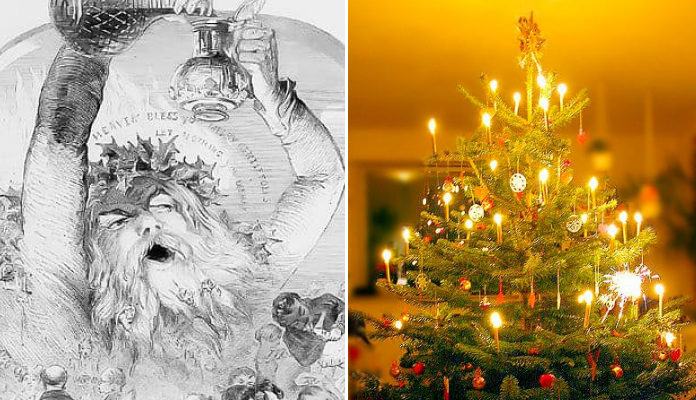 Christmas is a midwinter festival celebrated on December 25th that is dedicated to the birth of Jesus Christ.  Those who mark it celebrate in a variety of ways. Some attend services at church- the traditional services that initially gave the festival its name: “Christ’s mass.” Even those who do not believe in Christ enjoy the attendant festivities, celebrated with family and friends as well as putting up decorations, lighting candles, holding parties, eating and drinking and giving and receiving gifts.

Many of these Christmas traditions seem puzzling when compared to the central message of the Christian Christmas. For they either appear entirely irrelevant to it or else forced to fit. The reason for this is that many Christmas practices are much older than Christ’s Mass itself, dating back to much older religious traditions and gods. Some of these traditions can be easily traced back to their origins, while the exact roots of others have become lost in time. Here are just sixteen of the pagan traditions of Christmas.

16. The Twelve Days of Christmas Originates from the Numerous Pagan Festivals Once celebrated around midwinter.

Nowadays, the Twelve Days of Christmas aren’t kept so carefully as they once were, although people recall them through the famous song “The Twelve Days of Christmas.”However, in the Middle Ages, it was commonplace for workers to down tools and relax and celebrate Christ’s birth with masses and revels stretched over almost two weeks. The Council of Tours established the Twelve Days in 567AD when they announced that the period between Christ’s nativity on December 25thand Epiphany on January 6thshould be part of the Christ Mass celebrations. But why was the period so long when Christ’s birth related to only one day?

The reason was simple. For the Roman calendar from mid-December to early January was jam-packed with midwinter festivals. Most famous of all was the Saturnalia, which started on December 17 and by the imperial period, lasted for a week. The Brumalia marked the winter solstice on December 21stand celebrations carried on into January, with January 7thdedicated to Janus, the god of beginnings and endings. Many people continued to celebrate these pagan festivals as the Christian era began. So the Church felt it was necessary to Christianise the festivities by absorbing them into the Christmas celebrations.