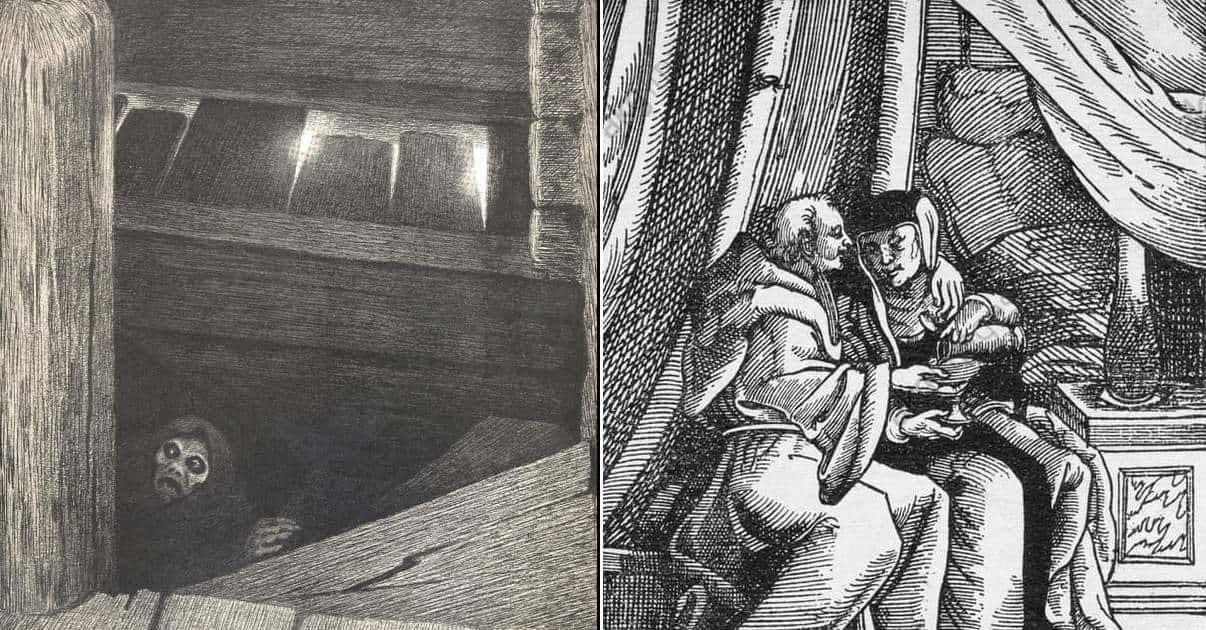 The term ‘vampire’ did not enter the English lexicon until around 1734, and is derived from the Serbian vampir. Thus it is anachronistic to term this section as above, given that the tale is eleventh-century, but there really is no more appropriate noun to describe the beings that Geoffrey of Burton claims haunted rural Nottinghamshire. Though the word ‘vampire’ is not used before the eighteenth century, there are many vampiric beings in English folklore. Indeed, the walking dead were apparently so common in twelfth-century England that William of Newburgh (c.1136-c.1198) said that it was too tedious to chronicle them all.

Around 1090, two villagers from Stapenhill fled to Drakelow, Derbyshire, which was owned by a Norman aristocrat named Roger the Poitevin. Their home village, Stapenhill, was owned by the Abbey of Burton, and the peasants were fleeing from working for their monastic overlords. Hearing the peasants’ fraudulent complaints against their former masters, Roger plundered the Abbey’s storehouses at Stapenhill, seizing crops from the barns and removing them to his own buildings at Drakelow. An armed fight broke out between Roger’s knights and ten outnumbered knights employed by the Abbey, which the latter miraculously won through the monks’ prayers.

The next day, the two peasants who started the trouble sat down to eat, and suddenly died. They were buried the next morning at the church of Stapenhill in wooden coffins. This is when things got disturbing: later that day, the dead peasants reappeared in person at Drakelow, carrying their own coffins astride their backs. Wandering around Drakelow for the night, the men sometimes shape-shifted to the form of bears and dogs and knocked on the doors of the local peasants, urging them in loud voices to ‘Move, quickly move! Get going! Come!’ This went on for many nights.

Eventually, a terrible plague followed the undead peasants to Drakelow. All of the living peasants except three sickened and finally died. Count Roger, terrified at the turn of events, begged forgiveness from the Abbot of Burton and prayed to Saint Modwenna. He commanded his reeve to bring double the crops he had stolen to the monks, before fleeing to his other lands. At Drakelow, the two remaining peasants (the reeve having also fled) got permission from the bishop to exhume the two plague-bringing Stapenhill men. Their bodies were intact, and the burial shroud around their mouths was stained with blood.

As in more familiar vampire tales, the undead were dealt with by being mutilated. The survivors removed the corpses’ heads and placed them between their legs in the grave. They next removed the hearts, burying what remained of the bodies again, and burned the organs from sunrise to sunset. Finally, the hearts cracked violently, and the awe-struck onlookers saw a crow fly from the flames, which was understood to be an evil spirit. The vampire-slayers fled to the next village with their families, and Drakelow as a cursed place was abandoned and generally avoided for many years to come.

“Ancient Legend of Satan’s Visit Reawakened by Footprints in the Snow,” The Daily Telegraph, March 13, 2009.

Fleming, Abraham. A Straunge and Terrible Wunder Wrought Very Late in the Parish Church of Bongay. 1577

Lecouteux, Claude. Phantom Armies of the Night: The Wild Hunt and the Ghostly Processions of the Undead. 2011.

“Study: Americans are as likely to Believe in Bigfoot as in the Big Bang Theory,” The Washington Post, October 24, 2014.

Westwood, Jennifer, and Jacqueline Simpson. The Lore of the Land: A Guide to England’s Legends, from Spring-Heeled Jack to the Witches of Warboys. London: Penguin, 2005.