The Hairy History of Bigfoot in 20 Intriguing Events

The Hairy History of Bigfoot in 20 Intriguing Events 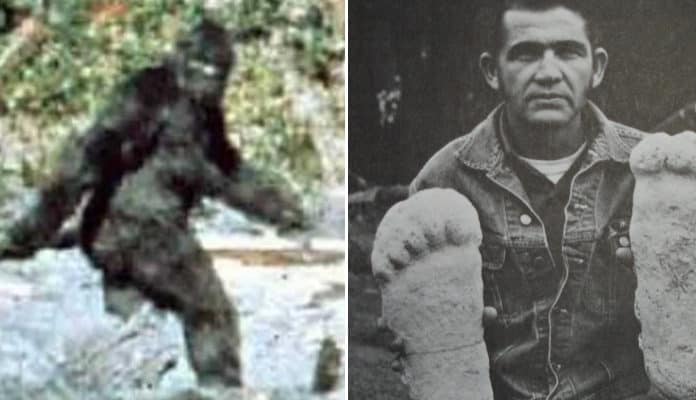 Across North America, giant, hairy man-beasts stalk the land. Screaming, throwing rocks, kidnapping people, leaving enormous footprints, or just hiding, these beasts are known collectively as Bigfoot or Sasquatch. Whether they’re a species of undiscovered ape or a prehistoric survival, one thing’s for sure: they don’t like us, and if they’re not too busy avoiding detection, they will attack innocent people and vandalize property. Though mainstream science has yet to catch up there are, thankfully, hundreds of enthusiasts on the case, dressed in camouflage and wielding night-vision and recording equipment, giving up days of their time on the hunt.

At least that’s what we’re told by some small but noisy groups, including a man who unsuccessfully petitioned the British Columbia government to recognize Sasquatch as a species. But even if you don’t believe that an undiscovered monster of such proportions could possibly exist in a large but intensely studied part of the world (76% of Americans fall in this camp as of 2013), Bigfoot is an important part of North American popular culture, lending his name to everything from burgers to horror films and even places. You’ve probably never seen Bigfoot, but you definitely know what s/he looks like.

Thus, in a sense, even if you do not believe the biological reality of Bigfoot, s/he certainly exists, in the same way other American folk heroes like Rip Van Winkle and Huckleberry Finn do. Interestingly, though, possible reports of Bigfoot have been around for a very long time and continue to the present day. Straddling the disciplines of natural history, evolutionary biology, and folklore, Bigfoot is a fascinating topic that’s going nowhere. So it’s never too late to brush up on your Sasquatch knowledge by reading this timeline of events in the (un)natural history of Bigfoot.

1. Some claim that Bigfoot was seen by Leif Erikson, and the encounter was recorded in Old Norse Sagas

Sometime around 1000 AD, an intrepid crew of Vikings led by a man called Leif Erikson (c.970-c.1020) sailed to the unknown West, and landed in North America. Naming the country Vinland, they established a small settlement in the new territory. There they encountered locals, some of whom they killed, and possibly Bigfoot himself. The sagas which survive to tell the tales record how Leif encountered people who came out of the woods, ‘horribly ugly, hairy, swarthy and with great black eyes’, who emitted unearthly howls. They tried to enter the Norse settlers’ homes, and were scared by their cattle.

Sound familiar? For most Bigfoot researchers, who take a scientific approach to the beast and see it as an undiscovered ape, the veracity of this early encounter is a vital piece of evidence. Unfortunately, though, the sagas make it clear that these were people. Calling them Skrellings, the sagas describe how they brought packs of goods to trade with the Icelanders and spoke an unknown dialect. Scholars are fairly unanimous in consensus that they were the Thule people, the ancestors of modern Inuits. Inuit folklore, importantly, preserves accounts of meetings with Leif and his Scandinavian men which corroborate this interpretation.

Furthermore, encounters with wild-men are a common feature of medieval travel literature. Claiming to have seen hairy, uncivilized people on your travels gave a strong indication that you had been somewhere really remote, and made your story more interesting. Wild-men, also known as wodewose, were common in heraldry and medieval drama (as in the illustration above), and their popularity may have inspired the saga writers, writing centuries after the expedition, to have exaggerated the appearance of the indigenous Thule people to conform to the established idea of what people at the edge of the known world looked like.