Where the Wild Things Weren't: A Dozen Map Monsters from History

Where the Wild Things Weren’t: A Dozen Map Monsters from History 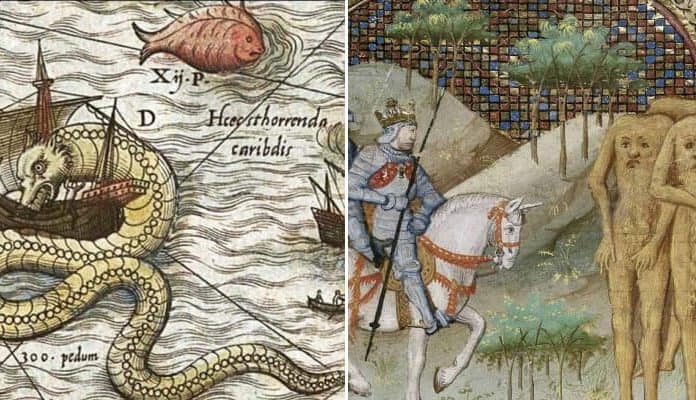 Have you ever looked at a church or cathedral, and wondered why it’s covered in hideous monsters? After all, these are houses of God, a far from monstrous being for those who believe in him. Equally, have you wondered about the often obscene and monstrous daubings that surround sacred texts in medieval manuscripts? Although we cannot entirely account for this strange phenomenon, the most popular theory is that these monsters are there to mark the boundary between the sacred and profane. That is, within the building and the text is God and His associated benevolence, and without… well, monsters.

This method of demarcating spaces by incorporating monsters also characterizes maps and accounts of distant places from the ancient world to the Enlightenment era. Old maps frequently depict hideous monsters in the unexplored regions of the known world. On the one hand, they serve as a warning, and on the other, they emphatically mark where civilization ends. But, scary or otherwise, these monstrous creatures fascinated people for centuries, and still capture the modern imagination. Although people were happy to accept that these creatures were dangerous and uncivilized, they also thirsted to know more about them and their peculiar lifestyle.

The term ‘monster’ comes from the Latin monstrum, meaning a warning, omen, or something that evokes wonder. Our modern verb ‘to demonstrate’ is a derivation of a closely-related Latin word, demonstro, which etymology reminds us of another function of monsters in the medieval period and beyond, which is to teach us something. Thus the map monsters were discussed and analysed in myriad ways to unravel what God was trying to tell us through the more revolting parts of His Creation. In this list, we will look at 12 of the most interesting, and how they were depicted and described.

The Cynocephali were a race of creatures, native to Africa and India, with the body of a human and the head of a dog. They behaved in a manner very similar to people, farming the land and, according to the Greek writer Ctesias in c.400BC, ‘they are extremely just, like the rest of the Indians with whom they associate’. They cooked their meat over fires, built ships, and even engaged in trade: ‘[they] exchange [agricultural crops] for bread, flour, and cotton stuffs with the Indians, from whom they also buy swords for hunting wild beasts, bows, and arrows’.

Indeed, their only difference to people is their head and subsequent necessity to communicate only in barks. But by the medieval period, legendary monstrous creatures like the Cynocephali were a big theological problem. With so many important Classical sources mentioning them, there was little reason to question their existence, but merely to ask what they were: were they chimeric monsters or people with dog’s heads? A famous discussion of the creatures comes in St Augustine’s 5th-century City of God. ‘What shall I say of the Cynocephali, whose dog-like head and barking proclaim them beasts rather than men?’ he puzzles.

His conclusion is disturbing, to say the least: ‘whoever is anywhere born a man, that is, a rational, mortal animal, no matter what unusual appearance he presents in color, movement, sound, nor how peculiar he is in some power, part, or quality of his nature, no Christian can doubt that he springs from that one protoplast’. That is, the Cynocephali are human! Later depictions of Cynocephali were less forgiving, however, describing them as quarrelsome and morally ignorant, yet redeemable because of their essential humanity, thus providing encouragement to sinners who feared that they could not be saved by the Church.

Though Augustine is sceptical of their existence, it is possible that the dog-heads were based on real observations, with the occasionally-bipedal baboon, which has a canine muzzle, suggested as the origin for the legend. They are described by Marco Polo as ‘a most cruel generation’, and eyewitness accounts of Cynocephali are even discussed by Christopher Columbus in his diary entry for November 23rd 1492: ‘I understand [that] a long distance from here, there are men with one eye and others with dogs’ snouts who eat men’. The tribe, called ‘caniba’ in local dialect, is possibly the etymological root of ‘cannibal’.

The most famous Cynocephalus was undoubtedly St Christopher. In the Eastern Orthodox tradition, Christopher was originally a fierce, dog-headed warrior captured in battle. Upon meeting Christ, he repented of his ways and saw the light, and was thus gifted with the reward of a human appearance. His alleged Cynocephalus-origin comes from a mistranslation of the Latin word Cananeus, which was intended to mean ‘Canaanite’ but was mistranslated to ‘canine’. There are many Eastern depictions of a dog-headed St Christopher in clerical garb, which begs the question of why today’s St Christopher’s medals never show this marvellous iteration of the saint.