9. The Sinking Of the Tirpitz 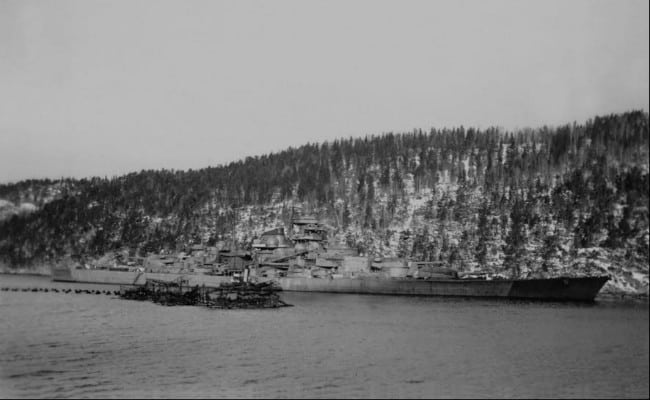 Tirpitz was the largest battleship the Nazi Germany had built right before World War II. Sister ship to the more famous Bismarck, mighty 42,900 ton Tirpitz carried a main armament of eight 15 inch guns, and posed a grave threat to Allied shipping, the British in particular. Over the year, the presence of the Tirpitz was a great concern to the Allied Forces. The British Royal Air Force and Royal Navy made several attempts to sink the Tirpitz but were unsuccessful.

In January 1942, Tirpitz left Germany for Norway, where she would lead fearsome attacks on Allied convoys hauling supply cargoes to Allied forces in Russia. This became another concern to the Allies as they were forced to flee to the northern waters to guard against her. At this time, the attempts made by the British Royal Air Force and Royal Navy to sink her failed.

However, with a newly developed bomb called the ‘Tallboy,’ Bomber Command hatched a plan to use the bombs to sink the Tirpitz. The enormous bomb, weighing 5,400 kilograms (12,000 lb) was so big, and no other plane could carry it. The British, therefore, decided to use the Lancaster bomber, which was usually used for high-altitude night bombings to fly the mission. With the help of Norwegian undercover agents who were used for intelligence gathering, the British Special Operations (SOE) had daily reports on Tirpitz’s movements.

Finally, on November 12, 1944, the Royal Air Force carried out a successful attack using the Tallboy bomb and sank the Tirpitz. The attack was made by 29 Lancasters of Nos 9 and 617 Squadrons. With the sinking of the Tirpitz, Hitler lost the last influential ship of his surface battle fleet, and this marked the end of Germany’s naval war in northern waters.