10 African Dictators Who Ruined Their Countries

10 African Dictators Who Ruined Their Countries 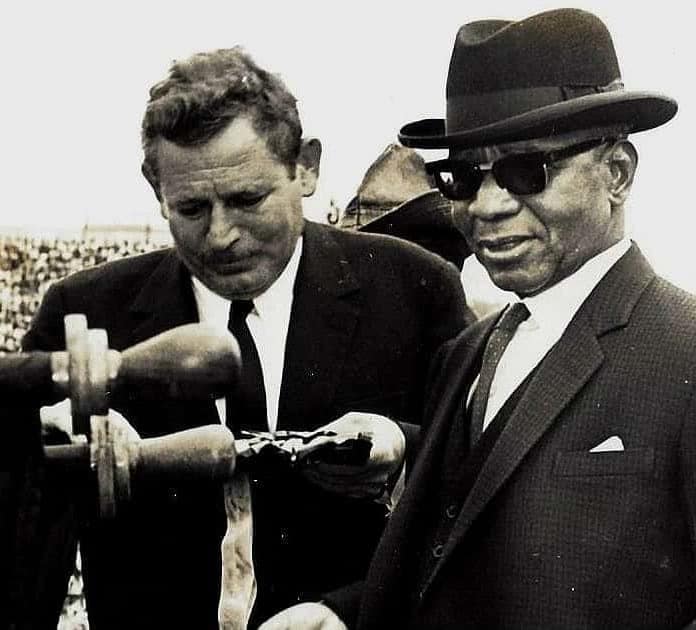 WWII broke the back of the European Empires, and the dominos began to fall across the imperial spectrum in 1947, soon after India achieved its independence. The Suez Crisis of 1956 tended to confirm the new status of Britain and France in a post-War world, and shock of it gave the rapidly proliferating African liberation movements a huge moral boost.

In their haste to get out of Africa, however, most European powers put in place a minimum of preparation, with the result that power, in the first few political generations, fell often into the hands of those least qualified to exercise it. This was not universally the case, of course, but here are some of the most striking examples.

We start off with Hastings Banda because, in a pool full of sharks, he was perhaps one of the least to be feared. He ruled the small, landlocked state of Malawi from 1966 to 1994, declaring himself President-for-Life in 1971, and establishing around himself a classic cult of personality.

Nyasaland was a pleasant and rather liberal British agricultural colony with an indigenous population recognized throughout the region to be both politically alert and active. In the early 1950s, as the African independence movement began to gather pace, white governments sought to band together for the sake of safety in numbers. This gave rise to the short-lived Federation of Rhodesia and Nyasaland.

The Nyasaland African National Congress was the first regional liberation party to challenge this move, leading to mass demonstrations and civil unrest throughout Nyasaland, in the end collapsing the Federation, and setting the tone for independence in both Malawi and neighboring Zambia.

Banda had been studying and living abroad since 1925, but in 1958 he was invited back to Nyasaland as the only credible leader of a burgeoning liberation movement. He was a medical doctor, and highly educated, but also somewhat unprepossessing at only 5ft 4in, with an eccentric habit of wearing a black Homburg hat, a heavy coat and dark glasses.

He had also entirely forgotten his native language, which proved to be an advantage when delivering speeches in English. These were suitably restrained for the consumption of the British authorities, but much more incendiary when translated for the ears of the crowd.

Banda proved to be a natural, utterly eclipsing his political colleagues, and leading Malawi to its first free election in 1961. Once in authority, however, and behind the euphoria of independence, Banda moved quickly to consolidate his grip on power, creating a cult of personality around himself. His official title was His Excellency the Life President of the Republic of Malawi, Ngwazi Dr. Hastings Kamuzu Banda.

By later African standards, his rule was not catastrophic, and despite a command economy, a system of central patronage and institutionalized corruption, he was regarded in many western capitals as simply benign and eccentric. At sixty-three, he was relatively old when he came into power, and his natural social conservatism decreed a highly conservative society, with dress codes mandated, and rigidly enforced, and draconian censorship.

Banda was eventually toppled in 1994. He was ninety-six years old, and his wealth was determined to be in the region of $360 million, rather modest by the standards of African dictators. He was permitted to live out his final years in exile in South Africa, dying in November 1997 at the age of ninety-nine.