Six Brutal Dictators You Don't Even Know About 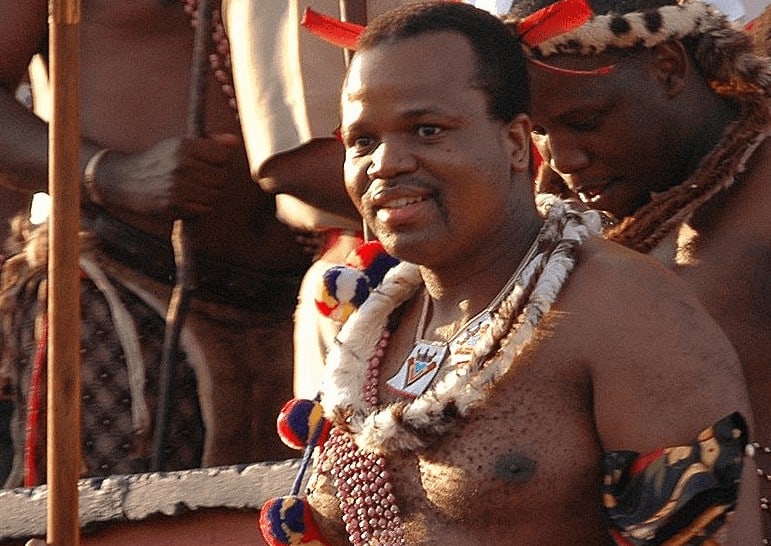 Six Brutal Dictators You Don’t Even Know About

We’re all familiar with Kim Jong-Un, the chairman of the “worker’s” party in North Korea. Beyond his crazy antics, outlandish claims, and constant saber-rattling, Kim is also a brutal dictator, with his people forced to live under an impoverished police state. Yet for every Kim Jong-Un that garners international attention, numerous other dictators are able to oppress their people out of the spotlight of international attention.

That’s why we’re going to pull back the curtain, and examine some of these corrupt and brutal dictators. 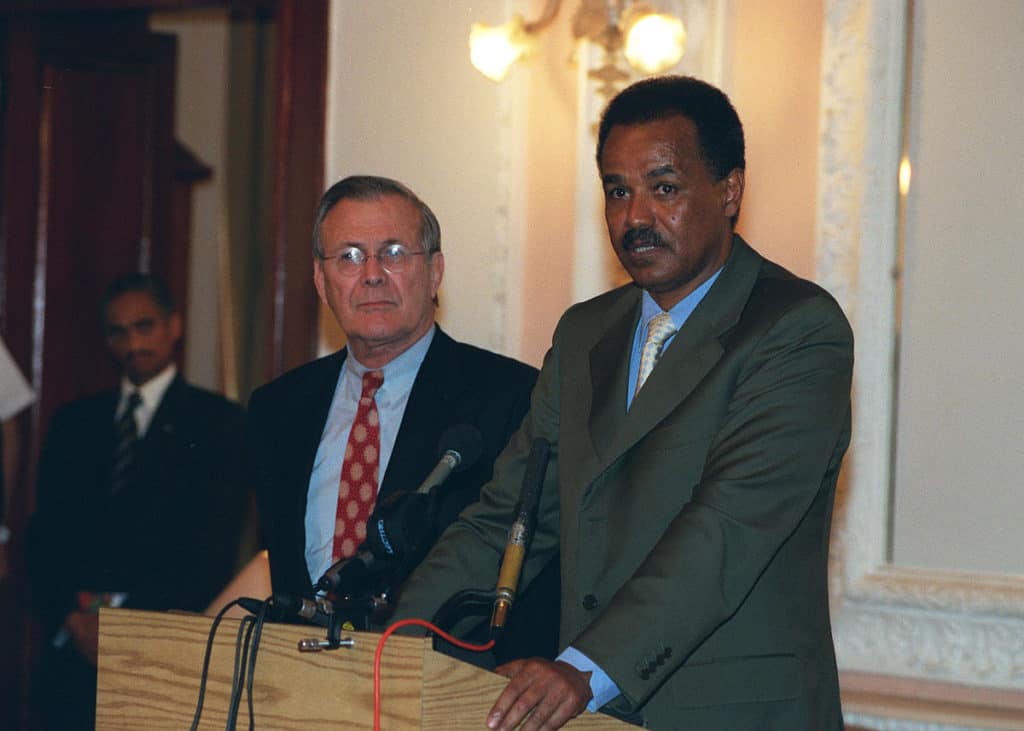 When Eritrea decided to institute the compulsory military service, the idea was more or less to create a modern-day Sparta. The compulsory military service was supposed to produce tough, disciplined Eritreans willing to work hard to improve their nation. The strong army, meanwhile, would ward off the specter threat of Ethiopia, a much larger nation that Eritrea once belonged to.

Instead, thousands of Eritreans flee each year, primarily to avoid military service. Meanwhile, the huge burden on citizens, most of whom are sustenance farmers when not in uniform, is immense. Since so many people are pressed into military service, when harvest season rolls around, there’s often not enough labor power available to successfully bring the crops in.

In fact, roughly one out of every twenty citizens is living in a military barracks. And despite the fact that the military is in charge of completing infrastructure projects, the country’s infrastructure remains poor. The impoverished nation is constantly on the verge of collapse, but President Afewerki has maintained control, having essentially created a police state.

Beyond the slavery/military model, Eritrea suffers from most of the “normal” human rights abuses found in said dictatorships. Under Isaias Afewerki, dissent is outlawed, disappearances are common and torture is routine. Opposition parties are out of the question, and the country can best be described as a police state. Unsurprisingly then, arbitrary detentions and arrests are also common.

In 2015, the United Nations released a damning report outlining the country’s human rights abuses. Yet if nothing else, Eritrea is a small, quiet, and out of the way place. Given its close proximity to the Middle East and Somalia, risks of fundamentalist Islam can’t be ruled out. Yet President Afewerki’s brutal leadership all but ensures that the Islamic State and similar organizations won’t be gaining a foothold, so the U.S. and other major powers are disinclined to push too hard for change. 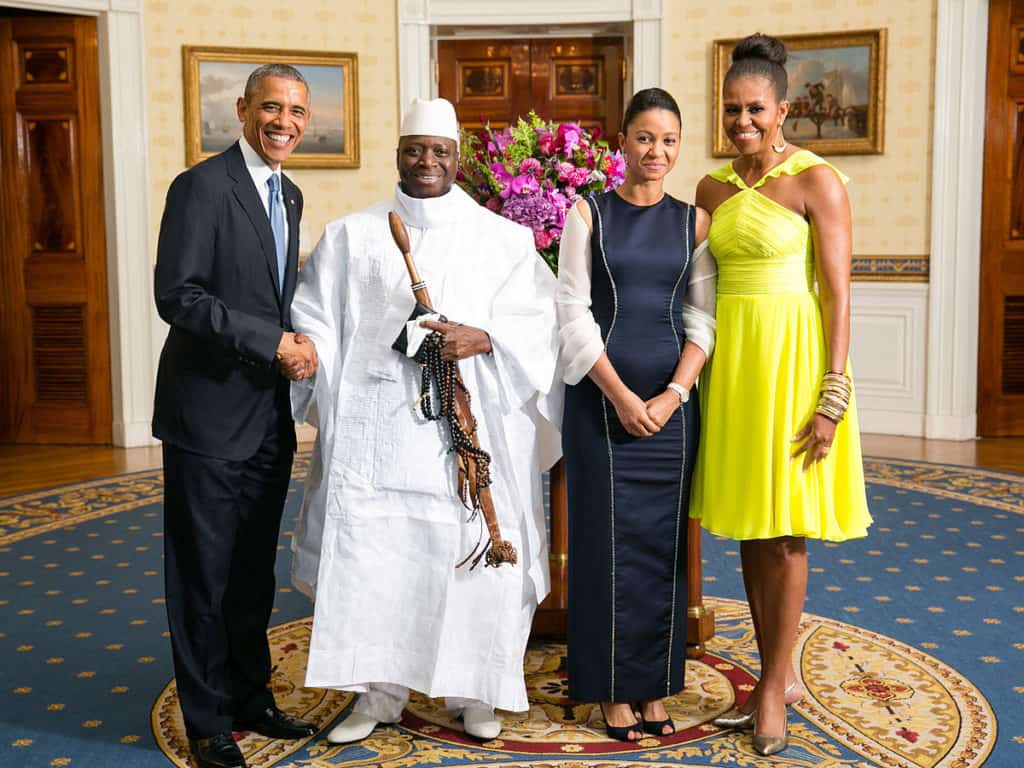 2. Yahya Jamme of the Gambia

The Gambia is a river, and also a country. One of the smallest countries in the world, the national borders follow its namesake river. In fact, at its widest point, the country is only 30 miles wide. The nearly two million people who live in the Gambia live under a brutal “Islamic” dictator, President Yahya Jamme.

Jamme seized power in a coup back in 1994, and has since ruled the Gambia with utmost ruthlessness. As is often the case with dictators, conditions on the ground often blur the line between horrific and surreal.

If you happen to find yourself meeting Jamme, make sure you use his full title and name: His Excellency Sheikh Professor Alhaji Dr. Yahya Abdul-Azziz Jemus Junkung Jammeh, or you could find yourself in hot water. Oh, but Mr. Excellency Sheikh Professor can cure AIDs. If you happen to be a member of the LGBT community, however, you might end up being decapitated.

While much of Western Africa has been enjoying economic growth and the strengthening of democratic institutions, the Gambia remains exceptionally poor, and democracy is nothing more than a pipe dream. The Gambia has also isolated itself internationally, having left the British Common Wealth, a collection of former British colonies and the United Kingdom. Why? Commonwealth officials had the audacity to criticize Jammeh for bringing back firing squads to speed up executions.

Jemmeh will be reelected again this year in yet another fraudulent election. The only chance of him being removed from power appears to a coup, health issue, or something similar.

While Jemmeh has many flaws, local citizens generally do hold him in high regard as he keeps crime under control. The Gambia also remains popular among tourists, with tens of thousands of Westerners flocking to the country each year. 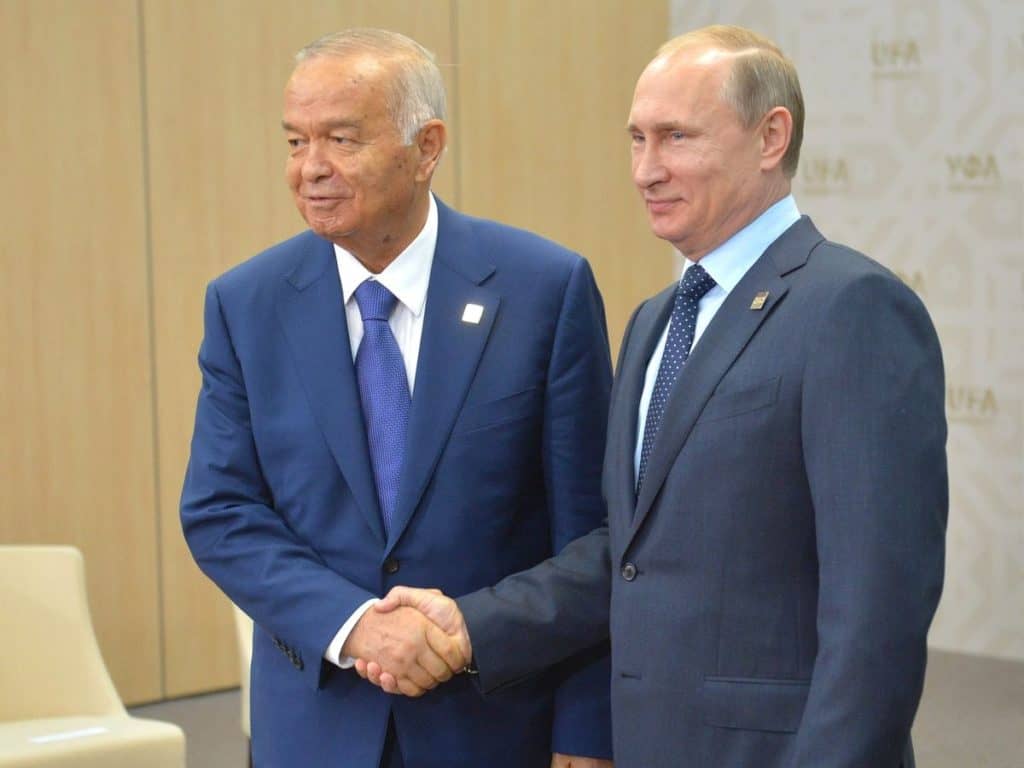 Be happy you didn’t grow up in Uzbekistan, because child labor is still legal in the country. After gaining independence from the Soviet Union in 1991, the country elected Islam Karimov to the office of President. Karimov never stepped down from office, and the elections quickly turned into shams.

Karimov died just weeks ago, but his long reign of terror was marked by brutal torture, a crackdown on opponents, tight control of the press, and other forms of oppression. Karimov was even accused of boiling prisoners alive, and thousands of dissidents were killed under his leadership. Meanwhile, thousands of people were imprisoned for their religious beliefs, and children were forced to work in slave like conditions.

Karimov’s family also enriched itself under his rule. Exactly how much money they stole over the years remains unknown, but Swiss prosecutors recovered more than $800 million dollars during a corruption probe. But hey, Karimov is dead, so conditions will improve, right?

Probably not. Shavkat Mirziyaev has been appointed as the interim Prime Minister, and so far seems set to maintain the status quo. Uzbekistan’s isolated economy is controlled by a small number of people, and they have a vested interest in making sure that the more things change, the more they stay the same.

So far, Mirziyaev appears to be more than willing to maintain conditions in the country, and it is unlikely that the people will be given a real say through elections. Further, many experts believe that power truly lies with Rustam Inoyatov, the head of Uzbekistan’s primary intelligence agency. Inoyatov is already in his seventies, however, and suffering from failing health, so he’s unlikely to seize full control.

Uzbekistan likely won’t receive too much criticism from international authorities. The government has so far proven to be a reliable partner in the global war on terror, and has been effective in suppressing fundamentalist Islam. 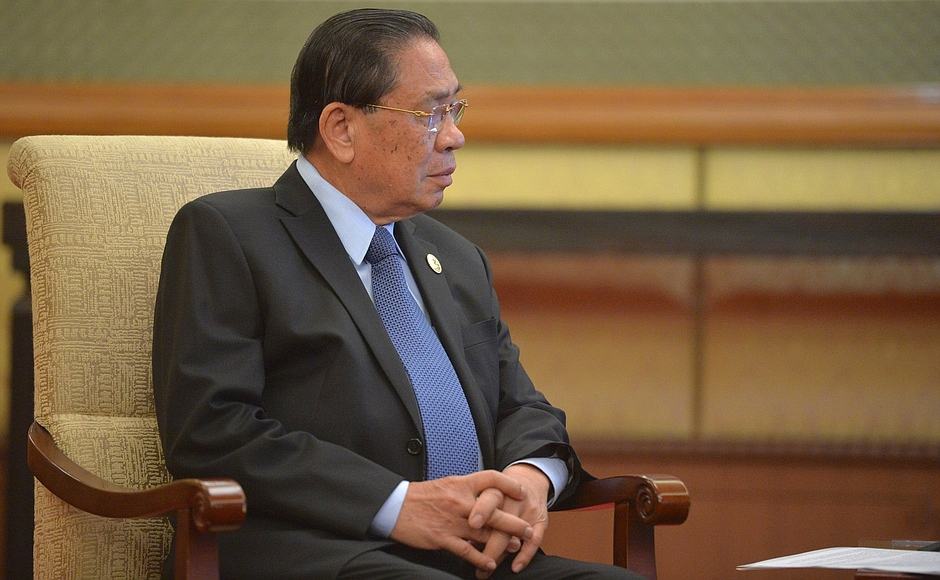 Choummaly Sayasone ruled Laos from 2006 to 2016, before stepping down earlier this year. During his ten years, the Asian strong man ruled Laos with an iron grip. All of the country’s radio stations, tv stations, and print press are essentially owned by the government. It should come as no surprise then that the 2016 World Press rankings found Laos to rank only 173 out of 180 countries. Even Cuba and Iran rank higher.

Laos is ruled by a “communist” party and is a one-state country. The government has been accused of engaging in a genocide against the Hmong people within their borders, and hundreds of thousands were forced to flee, relocating to Thailand and elsewhere.

Sayasone gained a reputation as one of the least charismatic world leaders during his time. Unlike say Kim Jong-Un, Sayasone largely stayed out of the spotlight and ruled relatively quietly. That doesn’t mean he’s not guilty of his fair share of crimes, however.

Activists have simply disappeared, with government agents almost certainly behind the abductions. Torture is believed to be common, and people suffering from drug addiction are treated as sub-human. “Rehabilitation” drug centers hold large numbers of people in horrid conditions. In many cases even children are thrown into these centers.

In other cases, officials have been accused of seizing land from peasants and farmers for their own use. Cronyism and corruption is also believed to be widespread, and elections are closed and tightly controlled party affairs. Transparency International considers Laos to be among the most corrupt countries in the world.

Choummaly Sayasone has retired but his successor, Bounnhang Vorachith, appears set to continue with a strong-armed, one-party rule of Laos. Reform has thus far been non-existent. Still, while the government deserves its share of criticism for its human rights abuses, Laos has enjoyed strong economic growth over the past several years. 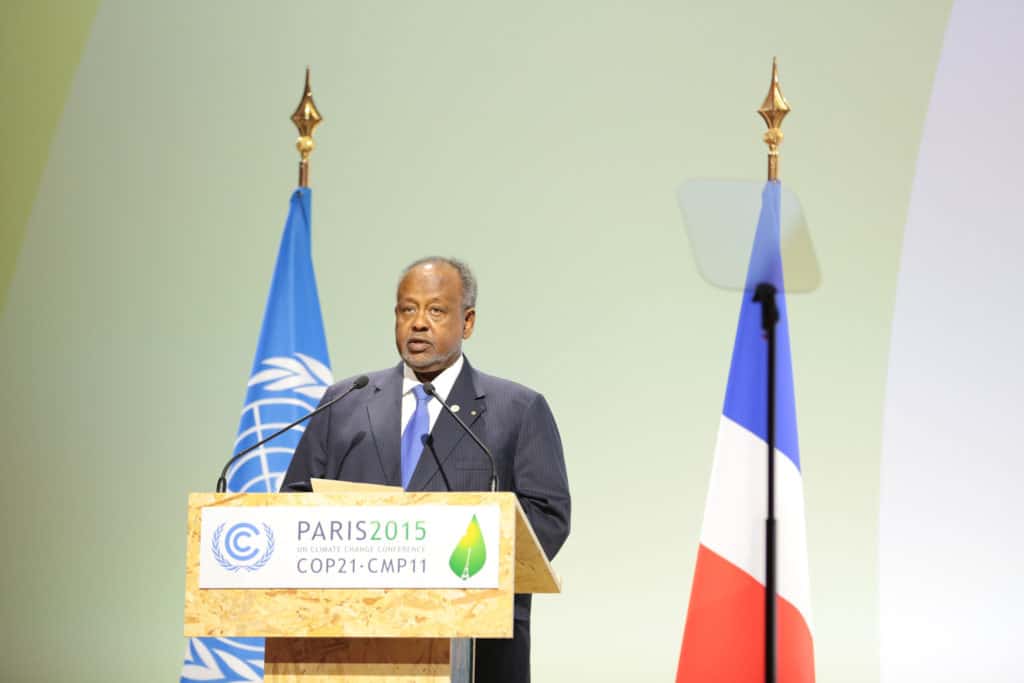 Go ahead and get any jokes regarding Djibout’s name out of the way right now. While the name can draw smirks, the human rights record in Djibouti is certainly no laughing matter. A small country located on the horn of Africa, Djibouti also has one of the worst human rights records in the world.

Ruled since 1999 by IsmaÃ¯l Omar Guelleh, Djibouti is home to less than a million people, and its land mass in one of the smallest in the world. This small size has made it easy for the government to rule the country with a brutal, iron fist. Guelleh was essentially appointed President after his uncle stepped down. Technically, Gulled could only run for two terms, but in 2010 he was able to push through reforms to stay in office.

Djibouti does hold elections, but they are shams, and not considered legitimate by international authorities. Serious rivals are disallowed from running, the press is tightly controlled, and citizens lack a general say in their government.

The government has also been accused of numerous other human rights violations. State sanctioned murder, detainment without charge or trial, human trafficking, and other charges have been levied against the government by the United States State Department and other authorities.

During the Arab Spring, protesters did take to the streets to challenge Guelleh’s rule, but these protests were swiftly and violently put down. Since then, protesters have been arrested on numerous occasions. Prison conditions are terrible and over crowded, and there are reports of prisoners being beaten and tortured.

As with many developing countries, Djibouti suffers from rampant corruption. Allegations against the government are not investigated, and senior government officials can essentially operate with impunity. In order to keep tabs on people, the government often employs plainclothes security members to infiltrate mosques and other popular meeting places.

King Mswati III is the last true and full monarch in Africa. Make no mistake, there are plenty of dictators and strong men, but most of them go by the moniker “president” or something similar. There are also plenty of chiefs and minor kings across Africa, but none of them are absolute kings like King Mswati III, who rules over Swaziland.

Having ascended to the throne at the young age of 18, King Mswati III rules his kingdom like the dictator-kings of past centuries. Speaking out against the king isn’t just a no-no, it’s a actually considered an act of terror. Political parties have been banned since 1973. In fact, that year a state of emergency was declared. Now, decades later, that same state of emergency is still in effect.

The King’s primary challenger is the People’s United Democratic Movement. The group is pushing for democracy, elections, human rights, and other things. For their hard work, the group has been classified as a terrorist organization. Members of the group have died unexpectedly and unexplainably, and leaders have been jailed on questionable charges.

Support for opposition groups, however, has been slowly growing. With the unemployment rate estimated to run as high as 40%, and with HIV having spread to roughly 1 in 4 adults, Swaziland faces numerous challenges. This combination of social and economic problems has pushed Swaziland to the brink of collapse, but so far King Mswati III has managed to hold onto power.

The King’s power is exerted through the long-standing Tikhundla tribal system, with traditional chiefs enjoying a lot of power. By keeping these chiefs invested, King Mswati can continue to enjoy a relatively strong and stable rule. The United States and other countries, however, have begun to push for sanctions and are trying to pressure the government into reform, but so far Swaziland has largely ignored the international community.