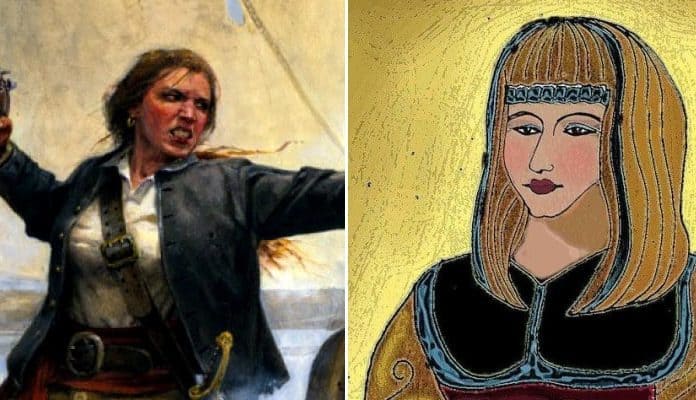 Thanks to their penchant for rum, sword fights, adventures and hidden treasure, pirates have long captured the popular imagination. These outlaws on the high seas have gone down in infamy, with the likes of Blackbeard and Black Bart now household names. But, while the popular image of a pirate captain might be that of a grizzled old sea dog with a bushy beard and peg leg, women pirates were also known to roam the high seas, and they were often every bit as ruthless as their male counterparts.

Over the centuries, several notable female buccaneers have used their cunning, their feminine charms well as their bloodlust, to capture boats and steal their cargo. In fact, some of them were so good at it that they even won the respect and admiration of their enemies, earning themselves fortunes in the process. Some turned to piracy for patriotic reasons, others to avenge the death of a loved one. And some just did it for the love of gold and power. Here, we’ll run though the most fearsome females to ever hoist the Jolly Roger and set out to sea with the worst of intentions:

Throughout the eighteenth century, the Caribbean Sea was no place for a faint-hearted seaman. As well as treacherous weather conditions, sailors faced the very real threat of piracy, with dozens of cut-throat buccaneers eager to commandeer their ships and make off with rich bounties. Anne Bonny was one of these feared pirates, and arguably the most famous female sea-faring outlaw of all time.

Despite her notoriety, relatively little is known about Bonny’s life, and over the years, facts and myth are likely to have mixed. What little we do know is thanks to criminal records and the fascinating book ‘A General History of the Pirates’, penned by famed pirate hunter Captain Charles Johnson.  It is believed that Anne was born in County Cork, on the southern tip of Ireland, around 1697. From the very beginning, she brought trouble with her. Being the illegitimate child of local magistrate William Cormac and his servant woman, the three were forced to flee their home in disgrace. The New World beckoned.

William immediately took to life in the United States, buying a plantation in South Carolina. But tragedy soon struck, with the death of his lady, Anne’s mother. Despite her young age, Anne was required to take charge of the household, including its slaves, and it’s about this time her fearsome nature started to become apparent. Rumor has it she knifed a servant girl to death and almost killed a man who tried to have his way with her. Evidently, home life was far from happy for Anne, which might have been why her head was turned by the pirate James Bonny.

Aged just 16, she wed the small-time pirate and the couple absconded. They ended up on New Providence Island, in the modern-day Bahamas, a haven for outlaws. Here, she made many good friends, which is why she was so appalled when her husband decided to turn informer. Disgusted, Anne ran away with Calico Jack Rackman, a small-time pirate with a taste for the good life. She headed off to sea with him, becoming a respected member of the crew. According to some tales, she disguised herself as a man, though others say she was open about her gender and won the true respect of her comrades.

After a brief break to give birth to a son, who was then abandoned, Anne re-joined Rackman and, with Mary Read now onboard, carried on attacking small ships. After one successful sortie in October of 1720, the crew got drunk and left themselves vulnerable when the British Navy attacked. All the crew were captured, tried and sentenced to death, with the exception of Mary and Anne, who were spared after they both claimed to be pregnant.

Mary Beard died behind bars. And what became of Anne Bonny, the most notorious of all female pirates? Nobody can say for sure. Since there is no official record of her being put to death, it’s believed she escaped execution. Could it be that she went back to her estranged husband? Or could her father have come to her rescue and put up a ransom and set her free? It’s even alleged she simply couldn’t resist the allure of the pirate life and returned to the high seas under a new identity.