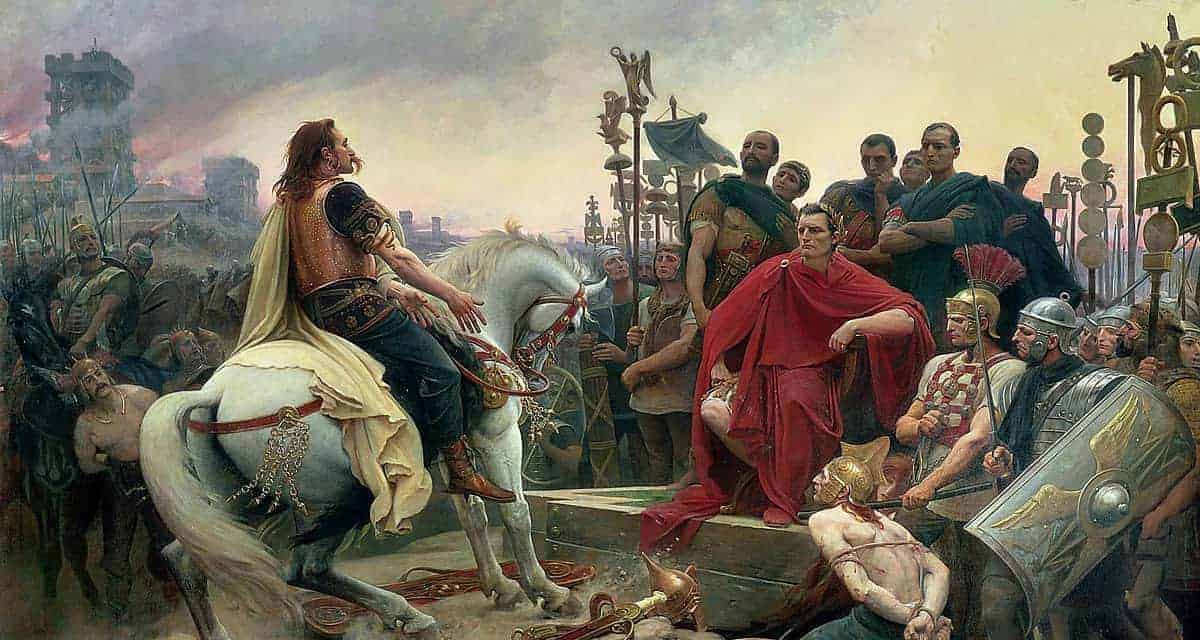 If Alesia was the best victory of Caesar’s career, Pharsalus was arguably his most important. A civil war broke out between Caesar and the Senate when the latter wouldn’t allow the conqueror of Gaul to run for consul. Caesar was furious, and on January 10, 49 BC, he led his army across the Rubicon River on the border of Gaul and Italy. Traditionally, crossing this river was considered an act of war. He is said to have briefly lingered before saying “Alea iacta est.” (the die is cast) and completing the crossing.

Caesar’s great rival Pompey chose to fight for the Senate. The Patrician faction led by Pompey was known as the Optimates while the populist faction led by Caesar was referred to as the Populares. After crossing the Rubicon, Caesar, with the aid of Mark Antony, captured several Italian towns. On January 17, Pompey ordered all senators in Rome to flee the city to Greece or else they would be classified as enemies. Caesar entered Rome unopposed and plundered its treasury. Instead of biding his time, however, he chose to chase after Pompey and took six legions to Spain.

After initial success, Caesar suffered a defeat at Dyrrhachium in modern-day Albania in July 48 BC. The Optimates commander failed to build upon the victory and ordered a halt. Caesar later criticized his enemy for that decision by saying it would have been a triumph had there been anyone there to take it. He avoided Pompey’s pursuing forces using various stratagems and captured a few towns before finding new supplies and moving towards Pharsalus.

This crucial battle took place in Greece on 9 August, and Caesar was in a weak position. His army probably featured no more than 22,000 soldiers while Pompey commanded a force of approximately 45,000. Pompey’s initial plan to wait until the enemy starved was a sound one, but he allowed senators to talk him into launching an attack. Even so, with superior numbers and higher quality cavalry, he should have earned a victory.

Pompey told his men that the right flank would be at the Enipeus River and the left side would be comprised of almost his entire cavalry force which was tasked with destroying the enemy cavalry. Caesar initially wanted to retreat to find more supplies, but when he saw Pompey’s forces lining up for battle, he believed his enemy was being forced into battle, so he changed his mind and stayed. He ordered 2,000 of his oldest soldiers to stay and guard the baggage, placed auxiliaries on the left under the command of Mark Antony, his best men on the right, cavalry on the extreme right and a couple of legions in the middle. He knew his line was stretched thin and ordered his experienced men not to engage unless requested.

Caesar knew his right-wing was likely to be overwhelmed, so he had a surprise in store for Pompey when the Optimates leader’s cavalry broke through. Awaiting them were 2,000 of Caesar’s best warriors who used their pila to stab the enemy cavalry and force a retreat. These men outflanked Pompey on the left and Caesar ordered his reserves to attack. Pompey’s legions disintegrated and fled while their leader escaped to Larissa. It was a remarkable victory and crucial in the context of the civil war although it was not decisive.