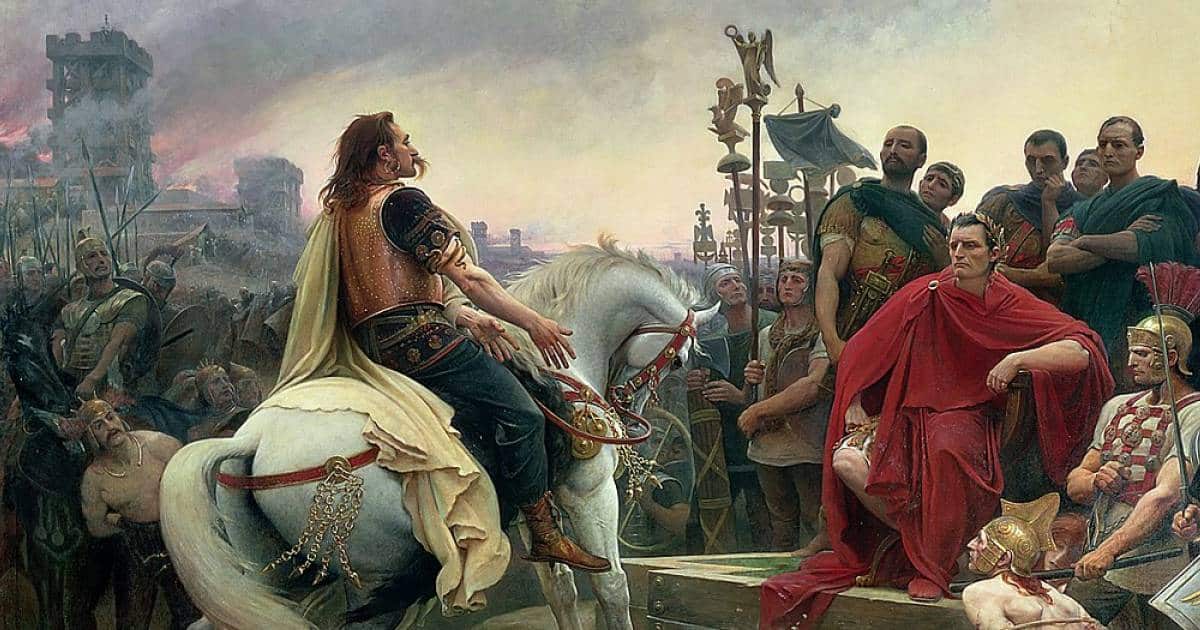 Widely regarded as one of the greatest military commanders in history, Julius Caesar enjoyed perhaps his finest moment at the Siege of Alesia in September 52 BC. Not only was he significantly outnumbered, he ultimately had to fight two armies at once. A less able commander would have panicked after being surrounded, but Caesar was no ordinary leader. He completely outfoxed his enemies and eventually forced their surrender.

The Gallic Wars began in 58 BC and involved Caesar waging war against a collection of Gallic tribes. It appeared as if Caesar was about to put the finishing touches to the campaign by 52 BC but the rebellious Gauls found a new leader named Vercingetorix after he overthrew dissenting tribal chiefs. He was able to unite several tribes against the Romans including the Senones, Parisii, Pictones, Turones, Aulerci, and his own Arverni tribe.

However, Caesar wasn’t backing down and seized the important town of Avaricum where 40,000 inhabitants were killed. Although Vercingetorix’s army greatly outnumbered the Romans, he wisely avoided open combat and preferred guerrilla tactics. However, Caesar would eventually force the Gallic tribes to fight a pitched battle.

The Battle of Gergovia

The Gallic tribes called a general council at Bibracte and declared Vercingetorix as the supreme commander of the allied Gallic forces. He demanded 15,000 cavalries which he planned to use to destroy the grain and hay supplies of the Romans. Vercingetorix also ordered his allies to burn their corn as part of his scorched earth policy. The next aim was to attack the Roman province in the knowledge that if the region fell, the Roman commander was marooned.

Lucius Caesar was in charge of defending the province, and he had 22 cohorts at his disposal. Vercingetorix began to shadow Julius Caesar’s movements as the Roman commander was marching across the margins of Lingones territory. Caesar was attempting to get to the province to prevent any major attack. However, Vercingetorix was within nine miles of Caesar’s camp and called a staff conference.

The Gallic leader thought that Caesar was looking to concede the campaign by retreating for safety. He believed the Romans would return with an even bigger force, so Vercingetorix called on his army to attack as soon as possible. The plan was to use cavalry to swoop down on the supply train and either slow the legionnaires down or force them to abandon their supplies.

Alas, Vercingetorix’s plan backfired at the Battle of Gergovia when his initial cavalry charge failed. Caesar probably expected the Gauls to follow up with infantry but in reality, the Gallic infantry was too far from the action to have an impact. Caesar quickly realized the enemy’s mistake and forced its cavalry to retreat. However, he refused to commit his infantry and Vercingetorix was able to retreat to Alesia, the capital of the Mandubii. The attack at Gergovia was poorly planned and executed, but worse was to come for Vercingetorix as he was totally outmaneuvered by Caesar in the next conflict.

Caesar Tightens the Noose at Alesia

Caesar laid siege to the city of Alesia, but according to Plutarch, who wrote about the event in the early part of the second century AD, the Roman commander was expected to fail in his attempt. Plutarch claimed there were 170,000 men inside Alesia and its high walls made it almost impossible for a small Roman army to take. Furthermore, an estimated 300,000 Gallic warriors arrived, so the Romans were trapped and were now under siege themselves. Caesar’s figures are very different. He wrote that there were 80,000 men in Alesia and 240,000 troops arriving as reinforcements.

The Romans seemed doomed but Caesar, as usual, had different ideas. There is a school of thought that Vercingetorix didn’t expect the Romans to follow him to the city, but once again, he miscalculated. The politics of Rome meant that Caesar could not return home without a decisive victory. To do so would leave him under threat from enemies within the city. He knew that Alesia was a chance to end the war decisively and he wasn’t passing up the opportunity.

The Siege of Alesia

Once Caesar arrived at the city, he knew that the best option was to starve out the inhabitants. Alesia was a fortified settlement on Mont-Auxois which was over 400 meters high; there were also different rivers on two sides. Also, Vercingetorix had ordered the construction of a ditch and six-foot wall where the hill faced east. Caesar had fewer than 50,000 men and decided to encircle the hill with siegeworks to encircle the enemy and force a surrender.

The circumvallation was about 16 kilometers long with 24 towers. Once completed, there would be no way for the Gauls to flee but before the fortifications were finished, Vercingetorix was able to sneak troops past the Romans, and they rode off to call for reinforcements. The inhabitants of Alesia had around one month’s worth of provisions left according to the calculations of the Gallic leader.

Caesar was informed of the news by captives and deserters and realized that he had to create a countermeasure immediately. He ordered the creation of a trench that was 20 feet deep with perpendicular sides. Next, he built all other works some 400 feet from that trench. In between these two points, he ordered the digging of two more trenches; each of which was 15 feet in length and depth with the inner one filled with water.

Caesar was far from finished as he ordered a 12-foot rampart, a wall with a parapet and huge stakes sticking out which was surrounded by turrets situated some 80 feet apart. By the time the Romans had finished, they had an array of traps just waiting for blundering enemies to wander into. Inside Alesia, the inhabitants sent out their women and children in the hope that Caesar’s army would feed them. He knew this would ruin his plans, so he sent them back without food. Meanwhile, a massive number of Gallic reinforcements had arrived and set up camp just one mile away from the Romans. It was made or break time for the legendary commander.

Lambs to the Slaughter

Even with the traps in place, the Roman soldiers must have been nervous at the sight of hundreds of thousands of Gauls getting ready to attack. However, they had total faith in Caesar, and this belief in their leader played a major role in their victory. Once the Gauls in Alesia saw their brethren, they left the city and attacked the inner Roman fortification as the reinforcements attacked the outer one. The Romans fended them off as Caesar successfully divided his forces into two separate units to cope with the combined assault.

The Gauls found a significant weakness in the Roman fortification and planned an assault on the weakly defended north side of the hill. After spending many hours creating hurdles, ladders, and hooks, the Gauls on the outside attacked once more with a force of 60,000, this time in the middle of the night. Vercingetorix and his men heard the war cry and stormed out of the city to launch another vicious attack.

The Romans were in dire straits, but once again, they remained cool under pressure and retaliated by throwing leaden balls and a shower of darts at the enemy. As it was dark, countless Gauls succumbed to the carefully laid Roman traps. Meanwhile, Vercingetorix desperately attacked any part of the inner fortification that seemed weak. Titus Labienus was sent to combat Vercingetorix with six cohorts of cavalry to support the weak area. Brutus was entrusted with six cohorts while Caius Fabius was given seven.

Although the attack was repelled, Labienus was almost beaten as his men were unable to fend off the marauding Gauls for much longer. Caesar saw the danger and rode to the rescue with four cohorts, and he sent some of his cavalry to the Gallic rear. The Romans were lifted by the arrival of Caesar and redoubled their efforts. The Gauls were beaten back, and the Roman cavalry arrived to slaughter the enemy.

On Vercingetorix’s side, the Gauls saw the annihilation of their reinforcements and retreated back to Alesia. According to Caesar, the Romans could have utterly destroyed the panicked Gauls if they weren’t so exhausted from all the fighting. Vercingetorix called a council and agreed to surrender to the Romans the following day.

Although the Gallic Wars lasted for a little over a year longer, the rest of the conflict consisted of little more than â€˜mopping up’ operations. After being so close to defeat and death, victory at Alesia was one of Caesar’s greatest military and political successes. Although the Roman Senate declared 20 days’ thanksgiving for Caesar’s overall victory in Gaul, the commander refused the honor and escalated tensions between himself and powerful people in Rome.

Within a couple of years, the Roman Civil War began which was ultimately won by Caesar. He did not live long enough to enjoy his status as Rome’s #1 because he was murdered on March 15, 44 BC. When looking back at Caesar’s military career, there is much to marvel at, but his win at Alesia was probably his masterpiece.