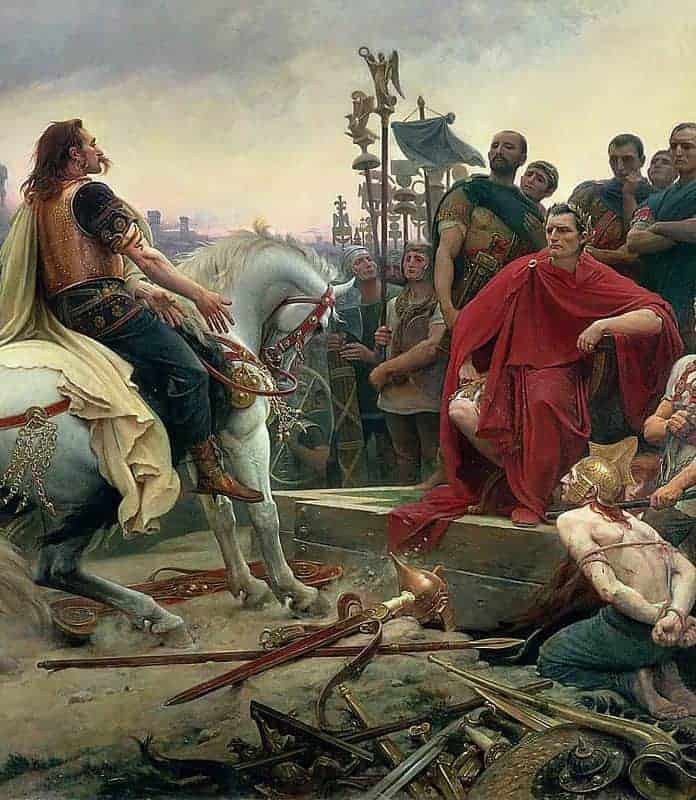 Julius Caesar is quite simply one of the most famous people who ever lived and is also regarded as an all-time great military leader. He was a statesman, general and eventually, a dictator and his actions left an indelible imprint not just on Rome, but also on the history of the world. Caesar played a significant role in the demise of the Republic which led to the subsequent Roman Empire.

He was also known as a great writer and orator, and we benefit from a first-hand account of his campaigns in Gaul and during the Civil War because he wrote extensively about his experiences. Of course, we have to accept that Caesar exaggerated his achievements but there is no question as to his military genius. In this article, I will look at 5 of his greatest battles.

The Battle of Bibracte was the second major battle during Caesar’s Gallic campaign and resulted in a decisive victory for the Roman general. After his stint as consul in 59 BC, Caesar was in a significant amount of debt. His membership in the First Triumvirate provided him with Proconsulship of Illyricum and Cisalpine Gaul. When Metellus Celer, the Governor of Transalpine Gaul died suddenly, Caesar received this province as well.

It appears as if Caesar hoped to use his legions to plunder some territories and alleviate his debt. There is a possibility that Gaul wasn’t even his first target. He had probably set his mind on a campaign against Dacia as the Romans respected the Gallic tribes having had problems with them before. The Helvetii were one of the largest groups (they were an amalgamation of five tribes) and had massacred a Roman army at the Battle of Burdigala in 107 BC. Caesar ultimately began his Gallic campaign in 58 BC in response to Helvetii plans for a mass migration into Roman territory.

Caesar scored a victory over a Helvetian clan called the Tigurine at the Battle of the Arar, but Bibracte was far more significant. The Helvetii learned that the Romans were heading to the town of Bibracte to get more supplies so took the opportunity to try and harass Caesar’s supply lines. Their actions forced the Roman commander to find higher ground to mount a defense. It is hard to provide precise numbers for the battle, and we certainly can’t take Caesar’s word for it given his penchant for self-aggrandizement. He claims his army of 50,000 defeated a Gallic force of 368,000! Modern estimates place the Helvetian strength at closer to 60,000 while Caesar’s assessment of his army’s size is probably accurate.

Caesar positioned his men in three lines at the top of a hill to protect their baggage train. The Helvetian army charged directly at the Romans who waited for the perfect moment before unleashing a flurry of pila javelins at the enemy. Caesar wrote that the Helvetians used a phalanx formation which blocked the initial salvo of javelins but the projectiles got stuck in their shields and were almost impossible to remove. They dropped their shields but were met with a second barrage of pila. Caesar ordered his men to charge, and they started to destroy the enemy front lines.

The battle was almost over, but then another 15,000 Helvetian troops arrived on the scene and attacked the Roman flank. Eventually, the Romans drove the enemy back towards the camp and ultimately, the barbarians scattered thus giving Caesar a significant victory early in his campaign. Even allowing for exaggeration, the Romans were almost certainly outnumbered. The officers of the legions showed tremendous discipline and courage to keep morale up and drive back a fearsome enemy.

Caesar showed his military command ability by calmly assessing the situation and ensuring his army stayed intact during a fierce battle. The Helvetii returned home to Switzerland although they would cause problems later on by aiding Vercingetorix in his fight against the Romans. Regarding casualties, Caesar’s claim that only 5,000 Romans died against 238,000 Helvetians is almost certainly inaccurate.