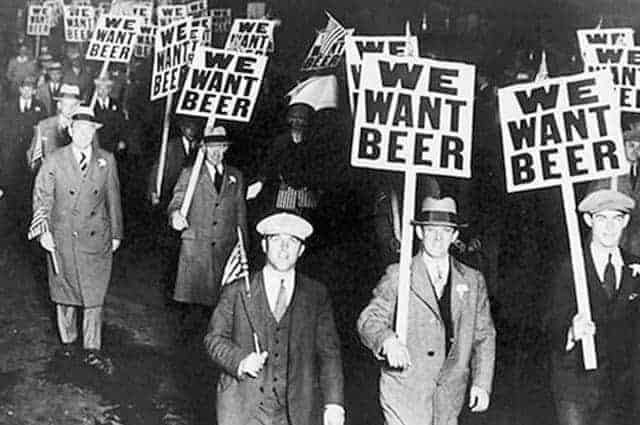 The years Prohibition was in effect are some of the most interesting to study in American History. Surprisingly, there is a lot of depth in this subject, from the reason why the 18th Amendment was passed and ratified, to the very weak and almost impossible enforcement, and finally the repeal of the amendment in 1933. There is also the effect that Prohibition had on the Great Depression that still fascinates economists and historians today.

The 18th Amendment was first proposed in December 1917. In January 1920, the amendment was ratified and went into effect. It was a relatively small portion of the population that actively pushed to ban the sale and transportation of alcohol. For example, the most famous group that pushed for a national act of Prohibition was the National Temperance Society. It was founded in 1826, and by 1935 it had around 1.5 million members. The population of the U.S. was around 14 million at the time.

But there was surprisingly strong backing for such an amendment by the 1910s. The sale of alcohol had always been contentious, all the way from the time of independence, right up until the 18th Amendment was passed. The state of Pennsylvania passed harsh taxes on whiskey leading to the Whiskey Rebellion in 1791, and taxes thereafter became a very popular way for temperance supporters to tax “sinners” in hopes of making alcohol consumption less prevalent.

By the end of World War II, the temperance movement had reached a peak of support in the United States. With the influx of immigrants after the Civil War (and even before), politicians often frequented saloons and public houses (pubs) to try to garner votes from immigrants. This caused a lot of people in the temperance movement to see saloons as sources of political corruption.

By the late 1920s, and into 1930, Prohibition was seen almost nationwide as a complete and utter failure. The main reason for this is that the U.S., by that time, was too large to enforce such a ban on a substance that had been so common up until the 18th was passed. The use and consumption of alcohol were just too prevalent to ban, and too well-liked by too many people. The country was also deep into the Great Depression, and people cared less and less about temperance, and more about jobs and feeding their families.

Prohibition caused speakeasies to open up all around the country where illegal alcohol was sold. By 1925, New York City alone had nearly 30,000 speakeasy locations, and that is a low estimate. With the size of the country, it was too easy for bootleggers to bring in alcohol or to brew it, then sell it in any number of places. Prohibition ultimately failed and was repealed in 1933.

But along the way, the U.S. government tried to come up with a way to enforce the new amendment. One of those methods was truly horrific and led to at least 10,000 deaths before the repeal in 1933.

The U.S. government, in an attempt to keep illegal alcohol out of the hands of citizens, started to put poison into non-drinkable alcoholic liquids. These liquids were being used by bootleggers to brew alcohol in place of normal, drinkable alcohol.

One of the reasons why they used this type of alcohol is because it is many times stronger than the normal stuff, which made it more profitable. The easier to get drunk, the more money someone will pay. These alcohols were called industrial alcohols. The bootleggers would hire chemists, who would put it through a process called “renaturing” which would make it drinkable and digestible. The bootleggers and chemists would get these alcohols from reputable sources.

The government, in an attempt to scare people from buying renatured alcoholic brews, mandated that the manufacturers of these liquids put stronger poisons into their Industrial Alcohols. This included methyl alcohol, which is very toxic to the human body.

It was Christmas 1926 when this was first discovered. By the end of the year, more than 100 people in New York alone would be dead or dying from the poisons added to alcohol.

By the time Prohibition ended in 1933, more than 10,000 were dead. The government continued to mandate the poisonous alcohol into these brews, and people apparently continued to drink it. What was meant to be a deterrent, turned out to be as New York City Medical Examiner Charles Norris said in 1927, “[the United State’s] national experiment in extermination.”

Norris was a loud critic of the U.S. government’s attempt to curtail the use of alcohol in such a manner. Likely because he was part of a profession who got to see the results as the dead continued to show up on his autopsy tables. He wrote in 1930, “The government knows it is not stopping drinking by putting poison in alcohol… [Y]et it continues its poisoning processes, heedless of the fact that people determined to drink are daily absorbing that poison. Knowing this to be true, the United States government must be charged with the moral responsibility for the deaths that poisoned liquor causes, although it cannot be held legally responsible.”

The government was not the only responsible party. Prohibition spawned a wave of organized crime, and people like Al Capone who ran groups of speakeasy organizations. Criminals who specialized in brewing and selling alcohol didn’t have to put up with the high regulation that the alcohol industry does today. That meant that booze was often contaminated by metals, bacteria, and other poisonous materials that made it dangerous to drink.

The end of Prohibition, then, likely saved thousands of lives in the United States. It rejuvenated an industry that had been banned from business for more than a decade and allowed for stringent controls on quality. It also got the government out of the business of poisoning people to keep them from doing something illegal.

Some Sources and Further Reading

History Collection – 40 Historical Markers on the Road to Prohibition

The Guardian – Why didn’t prohibition work?