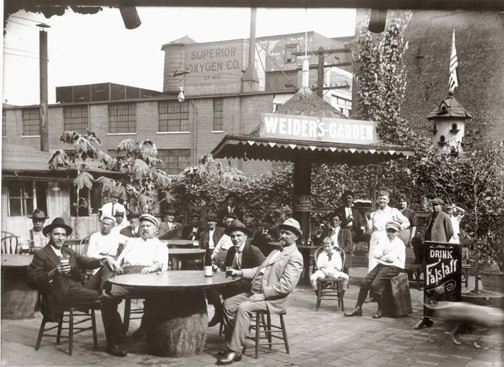 For almost a half century, progressives, preachers, suffragists, and xenophobes waged a war on the evils of alcohol. They believed that alcohol alone made people do bad things. The “devil baby” was used to display how husbands that drank too much and beat their wives disfigured and damaged the unborn. The impact of over-indulging could be seen all over the United States. Combined with a sophisticated propaganda machine, the teetotalers demanded that all alcohol be forbidden. Temperance was not taken seriously by the drinking public, until the moralist won.

But then, the unimaginable happened on January 17, 1920. The United States of America went dry. Federal law prohibited the transportation, manufacturing and selling of any alcoholic beverages, Brewers, distillers, saloon and tavern owners, and the drinking public could no longer legally obtain or make booze. A rumor started that claimed doctors could write a prescription for whiskey, rum, brandy and the like. What? Instead of taking two aspirins and calling the physician in the morning, people were making appointments to get a prescription for a pint that they could fill at the local druggist. This is the story of legal drinking during Prohibition in the United States.

Bad Water is Better than Booze

America changed rapidly during the 19th century. The telegraph made instant communication over long distances possible while the railroad transported raw materials to factories and then shipped out consumer goods to the hinterland. Foreign laborers flooded into the country to work in factories and live in cities. New customs and cultural institutions began making their mark on the nation. Concerned citizens began forming groups to attack and curb these new influences.

For working men, women, and children, Sunday was a day of leisure. It was the only day of the week where factories were closed. Workers relaxed and enjoyed drinks to unwind before their six-day workweek resumed. The pious considered it taboo to drink on a Sunday and the Women’s Christian Temperance Union challenged local governments to shut down taverns on Sunday. As they enjoyed their successes they began to focus on eliminating alcohol all together. What began as localized chapters swelled into a national movement.

By 1900, the Women’s Christian Temperance Union had formed into the Anti-Saloon League. People from all walks of life supported the Anti-Saloon League’s efforts to shut down liquor production and distribution. Collectively many wealthy, poor, religious, and even politicians believed that America had a serious drinking problem. The League was particularly harsh to one immigrant group, the German Lutherans.

Beer gardens were a cultural institution for German Lutherans. They gathered there on Sundays to converse with family and friends, exchange news from home, and share in a communal meal all while drinking beer. Members of the Anti-Saloon League believed that these places were pure evil and not just because of the alcohol served. Many believed that the Germans were plotting to overthrow the government of the United States on the eve of the First World War.

Further complicating the Anti-Saloon League’s argument was the fact that water simply was not safe to drink. At the turn to the 20th century, raw sewage was still thrown onto the street from chamber pots, outdoor toilets, and communal buckets in tenement buildings. In Chicago, for example, landlords were required by city ordinances to provide water to a building, but there was no ordinance that stated the water had to go up to the 5th floor. In working class, poor, and rural areas, outdoor toilets were the norm. Solid wast sanitation facilities existed, but they were not sophisticated. As such, water-borne illnesses like tuberculosis, dysentery, and cholera continued to make people very sick. Water could kill. Distilled beverages were the safer choice.

Prescriptions for Liquor – NO REFILLS!

Regardless of how taverns and alcohol benefited the working class and immigrant communities, the Anti-Saloon League was determined to shutter all drinking establishments. Women in black dresses paraded up and down streets in vice districts praying loudly for the poor souls that entered into the saloons. They professed that the ethnic saloons were dens of ill repute. For the moralists, these dens had to be shut down and the sooner the better.

Then the unimaginable happened. The moralist won. On a wave of implementing prohibition in numerous states, they were able to convince United States Congress to pass a constitutional amendment outlawing “intoxicating liquors.” Suddenly, alcohol patrons found themselves in a pickle. Beginning on January 17, 1920, they would no longer be able to walk into their favorite watering hole and order a beer. A glimmer of hope arose. As the moralist celebrated their victory over the elimination of alcohol and the closing of numerous taverns, the 66th Congress passed the National Prohibition Act commonly known as the Volstead Act.

Moralists were happy, but drinkers—alcoholics or not—and businesses that made their money from the sale, manufacturing, and transporting booze were not. The Volstead Act gave federal and state governments the authority to regulate and enforce the 18th Amendment. While the 18th Amendment prohibited “the manufacture, sale, or transportation of intoxicating liquors” it made no provision for enforcing the law, which is what the Volstead Act did. And that glimmer of hope? It was in the the language of the Volstead Act that stated there had to be an “ample supply of alcohol” for use in “scientific research” as well as use in “fuel, dye…and religious rituals.” Doctors now became the avenue through which people could get alcohol.

The 18th Amendment did not prohibit people from drinking alcohol. For centuries, people drank liquor to ease the aches and pains of everyday life. Sometimes brandy-soaked rags were used to comfort a teething infant and other times whiskey was used to ease the pain of pneumonia, tuberculous, high blood pressure, even cancer. Alcohol was widely used to warm a person up after a cold night’s walk or with the hearing of bad news. It was this common acceptance of the medical benefits of alcohol that the US Treasury Department printed alcohol prescription pads.

The idea was that someone with a medical complaint would go to see their doctor. After an examination, if deemed appropriate, the doctor would write a prescription. The government-issued prescription pad had the doctor fill out the kind of liquor, the quantity, and directions. This was followed by the date of the prescription, the patient’s name, address, as well as the name and license number of the doctor. There were spaces for the drug store’s name and its permit number as well as the date filled and cancelled along with the store’s address. On the bottom of the prescription were the words, THIS PRESCRIPTION MUST NOT BE REFILLED.

The Treasury Department established guidelines that suggested no more than one ounce of liquor could be prescribed for one person more than every three hours. That translates into about a pint of liquor over a 24 hour period. Patients were to pay the doctor a $3.00 fee for their exam and then pay another $3.00 to have their “whiskey prescription” filled. Within an hour a person could be enjoying their pint of prescribed whiskey instead of suffering from the effects of detoxification or the DTs. The downside was that he prescriptions could not be refilled. Corruption was abundant.

The American Medical Association (AMA) supported the temperance movement and the prohibition of all alcohol. They officially “opposed the use of alcohol as a beverage” and did not support its use as a therapeutic aid. Yet, the use of alcohol for medical purposes was a widespread practice throughout the world. Yet, doctors were tasked with determining who could get alcohol including shell-shocked soldiers, alcoholics, and people wishing to celebrate a new baby or marriage.

Teetotalers celebrated their victory while also unwittingly giving rise to a new and very violent American underground. Crime gangs began to control the manufacturing, transporting, and selling of intoxicating tonics. Speakeasies provide a surge in underground entertainment that openly challenged the cultural and social norms of the day. Women began wearing short dresses and short hair, which horrified the moral-minded. Yet, Americans continued to drink with the assistance of their doctors.

Doctors scrutinized the role the government played in dictating how they interacted with their patients. Some filed lawsuits to eliminate the “restrictive laws” passed by “laymen” that had little to no knowledge of medical care. The use of prescriptions for alcohol clearly exposed Prohibition for what it was, a sham. After 13 years, Americans had had enough. The 18th Amendment was repealed on December 5, 1933, when Utah became the 31st state to unanimously ratify the 21st Amendment. Prohibition was over but the damage it caused would continue.

Prohibition in the United States. Wikipedia.

Drink Some Whiskey, Call Me in the Morning. Beer and Groping in America. January 2012.

During Prohibition, Your Doctor Could Write You a Prescription for Booze. By Megan Gambino. October 2013.