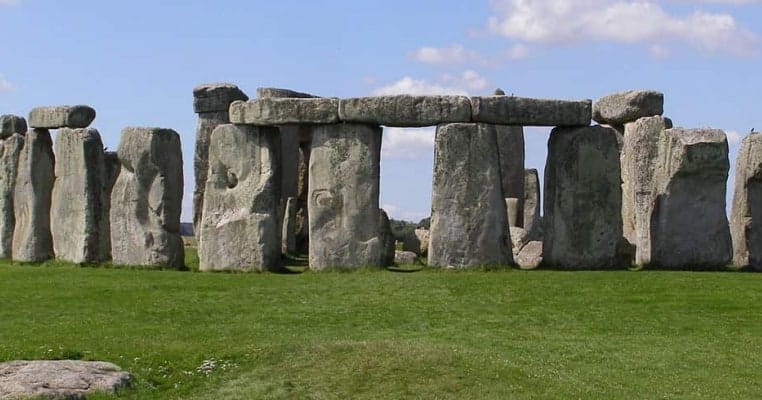 7. It probably took 30 million hours of labor to build Stonehenge

When you’re marvelling at Stonehenge, you not only have to think about how hard it was to move the stones all that way, but how they were positioned with such a perfect alignment to the sun at specific times of the year, and furthermore how they were erected at all. Salisbury Plain is not perfectly flat, and to get the stones to stand perfectly upright required a mixture of brute force and patience. They had to be placed vertically in angled pits dug with flint and antler tools and angled upright with ropes whilst the pit was gradually filled in.

The 9-tonne lintels on top of the standing Sarsens were either rolled up a high bank of sloped earth or moved with ropes and a platform. Their perfect fit would have required much more trial and error, given the slight slope of the ground around Stonehenge. The builders carved mortices to fix the lintels into a perfect horizontal position, which would have required several attempts for perfection. And imagine how many times the stones were erected ever so slightly out of perfect alignment with the sun. No wonder it’s been calculated that it took 30 million man-hours to build.

6. An Anglo-Saxon was beheaded at Stonehenge

It’s not just prehistoric artefacts that are found at Stonehenge. Both Roman and medieval items have been found at the site, presumably left by itinerant ancient litterbugs since the site wasn’t occupied after the Iron Age. And it seems that one unfortunate man met a sticky end at Stonehenge in the Anglo-Saxon period. He died sometime in the 7th century, and was forgotten about until his lonely grave was found during a 1923 excavation. A small nick in the lower jaw and a cut in the fourth vertebra suggest that he was killed with a single, clean blow.

This all suggests a professional execution, probably with a sword. Archaeologists have determined that he was aged between 28 and 32, and came from the South of England. Further archaeological CSI suggests that whoever he was, he was not a popular chap. After being beheaded, he was simply stuffed by force into a crudely dug pit and covered up. This all tallies with what we know about execution in this period. Other execution victims have been found in prehistoric sites, possibly because they were thought to be haunted, never settled by nice people, and hence served as an extra punishment.

5. Over 200 people are buried there, from far and wide

Whilst our Anglo-Saxon friend may have been buried in a single grave, once shoved beneath the surface he would have found himself in good company. In fact, there are over 200 people from different periods buried at Stonehenge and some experts think it’s simply a great big graveyard. We’ve already discussed the 63 cremated individuals, but there are many other noteworthy burials. The so-called Stonehenge Archer, found in the ditch, was buried c. 2300 BC with flint arrowheads, some of which were stuck in his body, suggesting that he was killed with a bow and arrow.

The Stonehenge Archer was a local man, but Stonehenge was an astonishingly multicultural place of burial. A 15 year old boy with a beautiful amber-bead necklace (above), radiocarbon dated to c.1550 BC, buried there has been proved to have grown up in the Mediterranean. Other burials add yet another layer of mystery to the Bluestones. Between 10 and 25 individuals amongst the 63 cremated people were not from Wiltshire, but Wales. Specifically, the very part of Wales where the Bluestones came from. Was Stonehenge a place of pilgrimage for Welsh people because of the stones carried far from their quarry?

We’ve already seen that Stonehenge began as just a henge, a circular bank-and-ditch enclosure. But the stones weren’t just suddenly put up. Stonehenge, as it exists today, is the product of thousands of years of design and redevelopment. At some stage, timber posts were probably erected, leaving the mysterious holes. In the stone phase, the Bluestones were the first to arrive around 2900 BC, suggesting that it took a lot to encourage the ancient builders to use stone. They placed these Welsh stones in an incomplete double circle, right in the middle of the henge.

Finally, about 400 years later, the giant Sarsens arrived. The Bluestones were rearranged to make a horseshoe, and the Sarsens formed an outer concentric ring. This was when Stonehenge got its more familiar appearance, with massive Sarsens topped by lintels in a circle around the Bluestones. The sides of the Sarsens facing the inside of the circle were smoother and better developed than the outer face, perhaps suggesting the safety that came from being inside. At this point in history, c.2500 BC, Stonehenge had its heyday, as archaeological evidence suggests up to 4, 000 people gathered there for Solstice celebrations.

3. The first excavation at Stonehenge took place in 1620

The first excavation at Stonehenge was undertaken by the Duke of Buckingham on behalf of King James I in 1620. James was intrigued by what Buckingham found, and sent the architect Inigo Jones to find out more. Jones, however, unhelpfully concluded that it was built by the Romans. The first man to find anything useful out about Stonehenge was John Aubrey (1626-97). Aubrey was an archaeological pioneer who was the first to record a number of important prehistoric monuments around Britain. At Stonehenge, he was the first to sketch the site’s plan and find the ancient postholes.

Aubrey became an archaeologist by accident. Aged 22, he was foxhunting near Avebury (see above), but soon gave up ruining the poor fox’s day to gaze at the surrounding landscape, ‘wonderfully surprised at the sight of those vast stones of which I had never heard before’. He realised that Avebury must represent a prehistoric temple, and got to work. Though he is most famous today for Stonehenge, Aubrey always retained a soft-spot for Avebury above all prehistoric monuments he came across: ‘Avebury does as much exceed in greatness the so reknowned [sic] Stonehenge, as a cathedral doeth a parish Church’.

2. Some people think that Stonehenge was built by aliens

Amongst the most controversial and, frankly, stupid historical schools of thought around today is the ancient aliens theory fanously propagated by the History Channel. The ‘logic’ behind the theory is that ancient people were not intelligent or technologically-advanced enough to build such things as the Pyramids or Teotihuacán, and so it must have been aliens. The problem with this theory is that it not only presupposes the existence of extraterrestrial life, but assumes that aliens had the inclination, biological capability, and technology to visit Earth. It also overlooks centuries of academic research and some great stories of human achievement.

But we have to look at the ancient alien theory about Stonehenge, as it’s disturbingly widespread. Acknowledging the astronomical significance of the monument, some people argue that knowledge about the heavens must have been given to prehistoric people in Wiltshire by aliens. The mystery of the Bluestones can be explained by aliens using their vessels to move them from the Preseli Hills, and the circular form of Stonehenge made an ideal landing-pad for their space ships. The only thing out of this world about Stonehenge however is the level of effort, knowledge, and sophistication required to build it.

1. Whoever built it had a phenomenal knowledge of astronomy and mathematics

Discounting the above for obvious reasons, there are many convincing theories about the function of Stonehenge. Burial ground, ceremonial site, temple, astronomical calendar: it is all of these things at once. But a final, mind-blowing thought before you go: the people who designed Stonehenge had an incredible knowledge of astronomy and mathematics. Aligning the stones to the precise location of the sun rising at the Summer Solstice and setting at the Winter Solstice would have required years of observing the skies. Given the various stages of building and redesign, this was not the work of an individual or a fluke.

Research published in 2005 also sheds light on the advanced mathematics behind Stonehenge. The landscape archaeologist Anthony Johnson used computer analysis to determine that the chalk pits around it form a 56-sided polygon, laid out using square and circle geometry. The builders first used a rope to mark a circle, then laid out two squares to make an internal octagon, and from there the huge polygon was formed. This is all evidence of significant planning and knowledge, and erecting the stones would have required calculations on weight and the angle of the surface. All this, 2, 000 years before Pythagoras…

Geoffrey of Monmouth. The History of the Kings of Britain. Trans. by Lewis Thorpe. Harmondsworth: Penguin, 1977.

Keys, David. “Stonehenge Builders had Geometry Skills to rival Pythagoras”. The Independent, May 26, 2008.