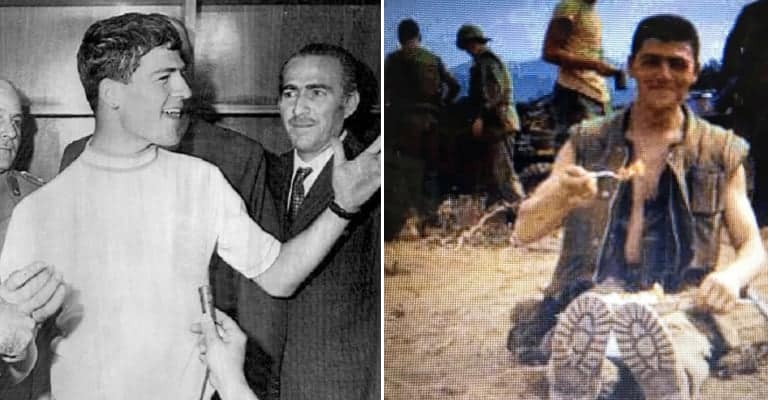 A Troubled US Marine

Raffaele Minichiello was born in Melito Arpino, Italy, in 1949. Given the dire conditions of post-war Italy, he grew up in poverty until age 14, when his family emigrated to the United States, and settled in Seattle. While the family’s conditions improved in their new country, the teenaged Minichiello, who spoke little English, had a tough time. Picked on and taunted in high school because of his accent and poor grasp of the language, he grew taciturn, touchy, and ever so sensitive to slights – characteristics that would contribute significantly to the most dramatic act of his life.

In 1967, he left high school to enlist in the United States Marine Corps. During training in Camp Pendleton, his drill instructors were impressed by the casual speed with which he assembled and disassembled weapons and all things mechanical. Apparently, the one subject in which he shone at high school was the one subject that required little linguistic skill: working with his hands in shop class. He was shipped to Vietnam in late 1967, where he was wounded in action, before returning to Camp Pendleton with a Purple Heart.

Back in Pendleton, Minichiello came to believe that his unit’s paymaster had shorted him $200. His complaints went nowhere, and Minichiello, as touchy and sensitive to slights in the Marines as he had been back in high school, saw that as a great betrayal and an intolerable affront to his honor. So one night in May of 1969, he decided to extract his own form of justice. Guzzling eight cans of beer for liquid courage, Minichiello broke into the Post Exchange, where he took exactly $200 worth of wristwatches and radios.

Arrested and charged with burglary and theft, Minichiello was scheduled for a court martial. He saw that as yet another betrayal, and a further affront to his honor, to add to his growing list of grievances against the Marine Corps and America in general. Once again, he decided to take matters into his own hands, and escalate things by ditching the court martial, the Marines, and the United States. He would go back to Italy. However, instead of buying an airplane ticket, he decided to return to Italy in an epically dramatic way.

Minichiello’s court martial was scheduled for October 29th, 1969. On October 28th, he deserted, and headed to Los Angeles. There, he bought an M1 rifle and 250 rounds of ammunition, and a plane ticket on TWA Flight 85 – a Boeing 707 bound for San Francisco. A handsome hunk, Minichiello bypassed what little security existed in those days by flirting with some stewardesses, and charmed them into letting him board the plane early with them, via a secondary entrance. His carry on luggage included the disassembled rifle and ammunition. 15 minutes into the flight, Minichiello reassembled and loaded his rifle, and announced a hijacking.

At gunpoint, Minichiello ordered the captain to fly to New York. The plane landed in Denver, where he released the passengers, before continuing on to the Big Apple. As the plane refueled in Denver, Minichiello told the captain and crew that NYC was not his final destination, and that he planned to go all the way to Italy. There, he felt, people would understand why getting screwed over $200 was such a grave insult to his honor, that it justified the drastic steps he was taking by way of redress.

At John F. Kennedy Airport in NYC, FBI agents in bulletproof vests surrounded the aircraft. Whether they sought to intimidate Minichiello, or were preparing for an assault to take out the hijacker and end the drama, it did not work. To demonstrate that he meant business, Minichiello fired a bullet into the roof of the fuselage, which startled the FBI into backing off. The 707 then proceeded to Bangor, Maine, thence across the Atlantic to Shannon, Ireland, and finally, to Rome. All in all, Raffaele Minichiello had pulled off what was the longest hijacking in the history of civil aviation, that lasted more than 19 hours in the air from Los Angeles to Rome, and covered nearly 7000 miles.

In Rome, Minichiello avoided arrest by taking a cop hostage at the airport, and stealing his police car. He sped off to a rural church, where he sought sanctuary, and where he was tracked down and arrested on November 2nd, 1969. As he was dragged off by Italian police, he wailed “Paisà, perchè m’arresti?” (“countryman, why are you arresting me?”) – a phrase that went viral, as many Italians rallied to his cause. It helped that Minichiello was easy on the eyes, and women swooned over his movie star good looks. He became an instant sensation and folk hero in Italy.

With that kind of head start in the battle for public sympathy, Minichiello’s legal team had a relatively easy time in framing his crime as resulting from trauma he had experienced in Vietnam while earning a Purple Heart. That elicited great sympathy from an Italian public that was growing increasingly appalled by America’s conduct in Vietnam, and public pressure got the authorities to go easy on him. At his subsequent trial, Minichiello was acquitted of all charges, except for weapons possession.

Sentenced to seven and a half years in prison, Minichiello spent only eighteen months behind bars, before he was set free. Upon his release, he signed a contract to star in Spaghetti Western movies. The movie career did not pan out, however, and Minichiello ended up working as a waiter back in his birthplace of Melito Irpino. Today, he spends much of his free time maintaining a YouTube channel, dedicated mainly to accordion music.

New Yorker, February 17th, 2014 – A Throwback to an Earlier Age of Hijacking

People, December 15th, 1980 – An Ex-Skyjacker Who Survived an Earthquake Himself Rushes Aid to Italy’s Homeless