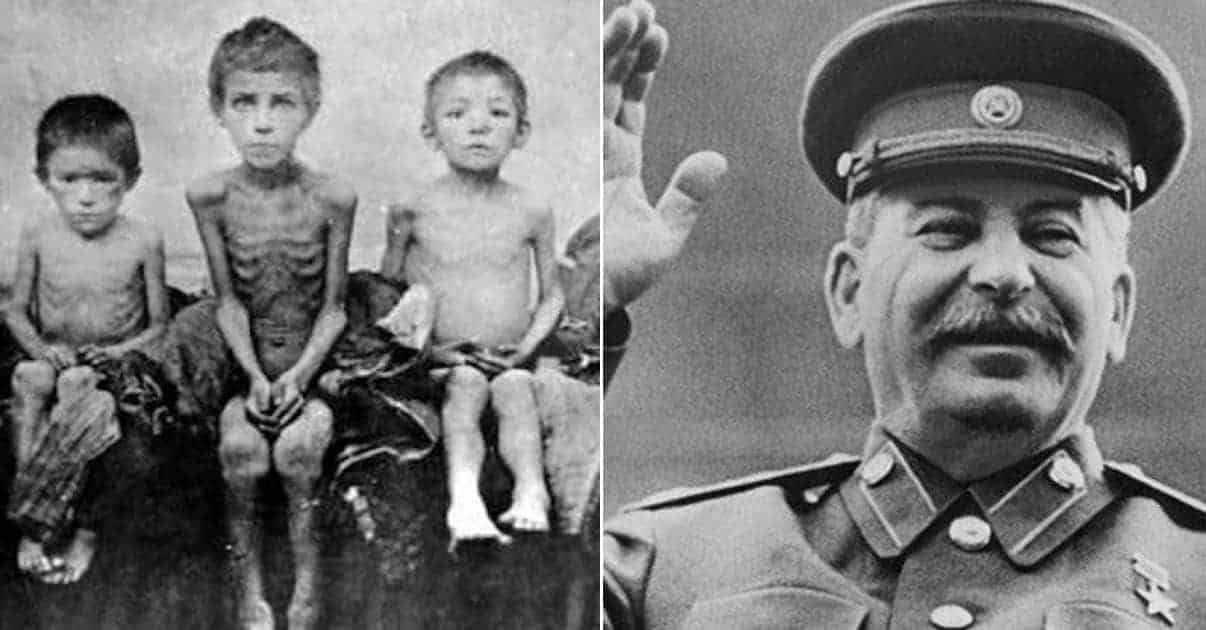 In June 1933, a doctor in what is now Ukraine penned a letter to a friend. “I have not yet become a cannibal,” she wrote, “but I am not sure that I shall not be one by the time my letter reaches you.” And if the doctor did become a cannibal by the end of 1933, she wouldn’t be the only one. At the time, the people of Ukraine were suffering through one of the worst famines in recorded history. Known as the Holodomor, or “the murder by starvation,” the famine would claim millions of lives over the space of a few years.

But unlike most famines, the Holodomor may have actually been planned. At the time, Ukraine was part of the Soviet Union, an uneasy union of countries across Eastern Europe and Central Asia, all held together in Josef Stalin‘s iron fist. As in many countries in the Union, there was a strong independence movement in Ukraine that threatened Stalin’s control. According to many historians, Stalin settled on a simple tool to fight this Ukrainian nationalism: hunger. After all, as Soviet diplomat, Maxim Litvinov once said, “Food is a weapon.” And the people of Ukraine were about to learn how devastating a weapon food can be.

Warnings that a famine was possible in Ukraine reached the Soviet leaders by 1930. But the Soviets made little serious effort to prevent it. In the Soviet system, food was taken from the farmers who grew it and redistributed as the party saw fit. Farmers were allowed to keep only a portion of what they worked to produce, and the industrial workers were given rations. As crops failed and food grew scarce, these rations were cut. And through it all, the party’s wagons continued to pull tons of food away from farms and into government depots.

Soon, people began to notice the effects of hunger. As someone begins to starve, their body begins to burn the fat it has stored up for quick energy. Once this fat is gone, the body begins to turn to whatever other nutrients it can find. It starts with burning up the protein in the muscles, which makes it look as though the person starving is wasting away. Eventually, the body has to take protein from the muscles of the heart. Once this happens, the heart begins to grow weaker and eventually fails. Obviously, death by starvation is slow and agonizing.

And within a few months of the start of the famine, hundreds of thousands of people were dying. They wandered through the streets begging for food, but there was none to be had. In the cities, workers were shown films telling them that they were starving because the peasants were hoarding food in an attempt to sabotage the communist revolution. But in the countryside, the same peasants were watching as communist officials carted away what little food they had. And soon, in both the cities and the in the rural areas, the only thing left to eat was each other.

As is always the case with famine, the good people died first. If you refused to steal food from your neighbor, you died. If you gave food to your children before you fed yourself, you died, and then they died. But soon, even the people who were willing to do whatever it took to survive were struggling. There simply wasn’t any food to be bought, traded for, or stolen. But there were bodies, thousands of them. If you wanted to survive, you had no other option than to eat the flesh of the dead.

Soon, reports began to emerge of rampant cannibalism. The first cases were usually kept quiet. People would notice a body by the side of the road and return late at night to take a few pieces of flesh before hiding the corpse. Or back-alley butcher shops would suddenly have a supply of fresh meat available at high prices. And of course, the starving customers preferred not to ask questions about where it had come from. But eventually, even this horrible source of food was exhausted. And people stopped waiting for their neighbors to die before they ate them.

By 1933, the rumors of cannibalism were too widely spread to be ignored. So, the Soviets dispatched their secret police to investigate. What they found was shocking. Not only were people cannibalizing the dead, but there were thousands of cases of people committing murder and eating their victims. Often, these victims weren’t strangers, but family members. Soviet records recorded cases where parents killed their children and shared the flesh among the rest of the family. In one shocking case, a family didn’t even wait until they were out of food to kill their daughter-in-law. Instead, they fed some of her corpse to their pigs in order to fatten them up and ate the rest themselves.

Of course, the children who were the most frequent victims were also desperate, as was recorded by a woman who ran an orphanage in Kharkov. “One day the children suddenly fell silent, we turned around to see what was happening, and they were eating the smallest child, little Petrus,” she wrote, “And Petrus was doing the same, he was tearing strips from himself and eating them, he ate as much as he could. The other children put their lips to his wounds and drank his blood.” Not only were people cannibalizing each other, they were cannibalizing themselves.

The authorities made a half-hearted attempt to crack down on the murders and cannibalism. Posters were plastered all over Ukranian cities stating “It is a barbaric act to eat your children!” And thousands of people were convicted in Soviet courts of cannibalism, but that number was probably only a fraction of the true number who were forced to eat human flesh. But even if the Soviet authorities were horrified to learn about the acts of cannibalism being committed, they didn’t take any serious actions to provide food to the Ukrainians until late 1933. By then, millions of people were already dead.

History Collection – 40 Images of the Tragic Bengal Famine of 1943