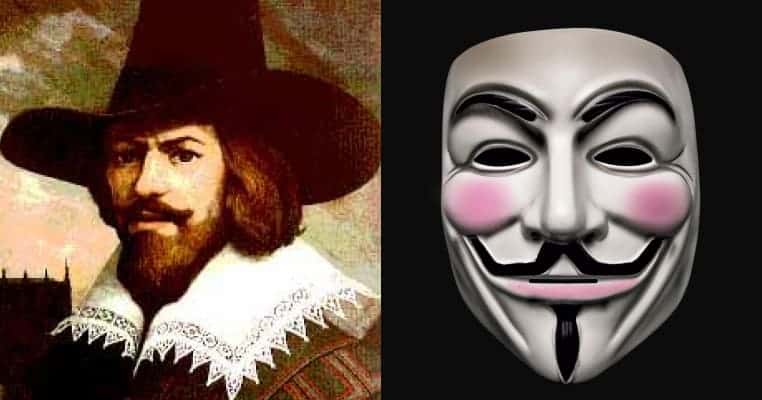 Almost since the beginning of time, the crime of treason has been one of the most hated offenses one can commit. The loyalty of a person to the governing body or person is a sacred relationship and one that cannot be violated and still be able to remain stable. History is filled with numerous stories of those who have betrayed their government or their king and, in general, things did not end well for them. Not only did the ruling power usually eliminate the accused party, but society also looked down upon them as well.

Though simply being accused of treason was often enough to get someone tortured and killed, there were a few cases where those who were committing the ultimate crime gained the perpetrator an insane level of fame. One of the most infamous traitors in history is Guy Fawkes, whose name has become synonymous with resistance over the last 4 centuries. But who was he really? And was he the brave and defiant anarchist we all know him as today?

The Man, The Conspirators and The Plot

Guy Fawkes (1570, York, England January 31, 1606) after being born and raised by a well-known family from Yorkshire, Fawkes enlisted in the British military in his early 20’s. Though he was born to parents who supported the Church of England making them Protestants, he converted to Roman Catholicism and even entered the Spanish military to fight in the 80 years of war on the side of Catholic Spain. He was well recognized for his military skill, especially with his expertise in explosives, as well as his anti-Protestant attitude, which in turn is how he was connected with the famed Gunpowder Plot.

Guy Fawkes is the most infamous name that has been tied to one of the most well recognized acts of treason in history, the Gunpowder Plot of 1605. This plot concocted by Fawkes and his conspirators contained plans to blow up Parliament and in the process kill King James I, his wife, and their eldest son. Following the explosion, there were plans to simultaneously kidnap the king’s daughter, Princess Elizabeth and place her on the throne, as she was the best choice for restoring England to its Catholic roots.

Contrary to popular belief, Fawkes was not a lone wolf in this plot. In actuality, the whole plot that he is associated with was not even his idea. Fawkes was brought into the conspiracy by Robert Catesby, Henry Garnett, Henry Percy, Thomas Percy, and John Wright, who all had their issues with the king. Most of their problems with the king had to do with his treatment of the Catholic upper class. Once the men came together, they began creating their plan and established their individual roles in the conspiracy. There were even efforts to gain foreign support and Fawkes even traveled abroad to try and garner support from the Spanish.

One of the conspirators named Thomas Percy purchased a house that was within close distance to the Houses of Parliament. It is believed that at this point Percy and Fawkes dug a tunnel from this house and directly beneath the Parliamentary floor.This was done in order to use the weapon that Fawkes had particular expertise in; explosives. Upwards of 35 barrels of gunpowder were put into place and hidden for months. It turns out the attack ended up being inadvertently delayed, due to Parliament being suspended because of the Black Plague that was sweeping through London at the time.

Fawkes’ main role in the plot was simple: he had to light the fuse and immediately escape without being seen. He was then to make his way across the River Thames to safety, while simultaneously there would be an uprising taking place in order to facilitate the kidnapping of Princess Elizabeth. The conspirators were then were going to install the Catholic princess as the next monarch of England. Following his escape, Fawkes was to make a run for continental Europe, where he hoped to receive money from Catholic rulers that may be sympathetic to his cause.

A handful of the conspirators had qualms about some of their fellow Catholics getting caught in the crossfire and potentially becoming collateral damage. As a result of this concern, an anonymous letter arrived to William Parker, 4th Baron of Monteagle, warning of the danger to come. This letter went so far as to suggest that he avoid Parliament all together once it came back in session. There are a couple of theories surrounding the magical appearance of this letter, some going as far to suggest that Parker concocted the letter himself in order to receive favor from the king. Regardless of the truth, this letter is what lead to the disintegration of the plot.

This letter eventually made its way into the hands of King James, who initially thought it was a complete hoax. Despite his lack of concern, a search was conducted and initially revealed no evidence of any plot being a foot. Upon the second inspection by a man named Sir Thomas Knyvet on the morning of November 5, Guy Fawkes was seen leaving the cellars under the houses of Parliament. Fawkes was immediately arrested and following a search of the tunnels, the barrels of gunpowder were discovered and therefore the plot was foiled.

Fawkes was initially questioned in front of the Privy Council, where he refused to answer any questions about his co-conspirators. He even refused to state what his actual name was. He did attempt to take the fall for the entire plot, but the council knew that there was no way that this whole plot could have been pulled off by a single person. Due to his lack of cooperation, Fawkes was imprisoned in the Tower of London and was then subjected to different torture methods including the infamous rack.

After being abused at the hands of the council for a few days, he did eventually reveal his true name. Shortly after that, he also gave up the names of some of his co-conspirators. Once they were arrested, Fawkes joined them at trial in which they were all found guilty of treason, and sentenced to death in an extremely gruesome fashion. All of those convicted were to be hung by their neck, cut down while still conscious and then castrated. They were then to be disemboweled, and finally be drawn and quartered, which involves having their dismembered parts dragged around the city by horses.

Ironically enough, the man who is most associated with the gunpowder plot actually never suffered the ultimate punishment like his companions. Instead of taking his sentence like the rest, Fawkes purposely jumped during the hanging to ensure that his neck would break in the process. With his neck broken during the initial fall, Fawkes died instantly. His body was still mutilated and drawn and quartered along with the rest of his conspirators, but Fawkes was lucky enough to be spared the pain that they all had to suffer.

November 5, 1605, celebrations were encouraged throughout the kingdom to celebrate the King’s escape from death. People were having bonfires and parties in the streets, a tradition that still goes on today. Even more interesting, at the time this conspiracy took place, the crown did their best to portray Fawkes as a treasonous, militant Catholic that just wanted to return England to the slavery of Catholicism. Despite efforts to portray Fawkes as a negative public figure, in the centuries since his execution, he has instead become the poster boy for anarchy and government resistance.

This fascination with the Gunpowder Plot has spanned the centuries even to the extent that experiments have been conducted in regards to the potential success of the plot. In 2003, the Center for Explosion Studies at the University of Aberystwyth conducted an experiment to determine whether the amount of gunpowder Fawkes placed under Parliament in 1605 would have done the job. Turns out that all of the Houses of Parliament, as well as Westminster Abbey, would have been almost completely destroyed, while structures that were as far as â…“ of a mile away would have been damaged as well.

It is clear that the man who is sometimes referred to as the real ring leader of this plan, Robert Catesby, made a very good choice in choosing Guy Fawkes for this particular part of the plan. Based on his credentials and experience alone, it makes sense that Fawkes would be a great fit. With years of military experience and specialized work with explosives under his belt, it is no wonder that in the 21st century we find that his idea would have been executed perfectly.

He has also made his way into modern pop culture with the development of the comic book series, V for Vendetta. This series was even made into a movie in 2005, and the Guy Fawkes mask that was designed for the graphic novel has actually become a symbol for the online hacking group known as Anonymous, and for the Occupy Movement as well. The spirit of rebellion that he represents leaves behind a legacy that lives on today in those who feel the government is overstepping its boundaries with the people.

How history views Guy Fawkes is really interesting considering the fact that though he was qualified for the job he was doing, he and the other conspirators ultimately failed. Not only did he fail, but he then gave up his friends and fellow Catholics, which resulted in them all paying the ultimate price. Had they succeeded, they very likely would have changed the course of world history. Despite all of this, he has managed to leave a mark on the collective psyche of those who believe in the fight against government oppression.

Who Was Guy Fawkes? The Man Behind The Mask. James Sharpe. History Magazine. National Geographic. November 3, 2018.

Guy Fawkes and the Gunpowder Plot. Who was the man behind the mask? Historic Royal Palaces.

What if the Gunpowder Plot had succeeded? Dr. John Cooper. HistoryExtra. November 2017.