The Ugliest Royal Portraits of All Time 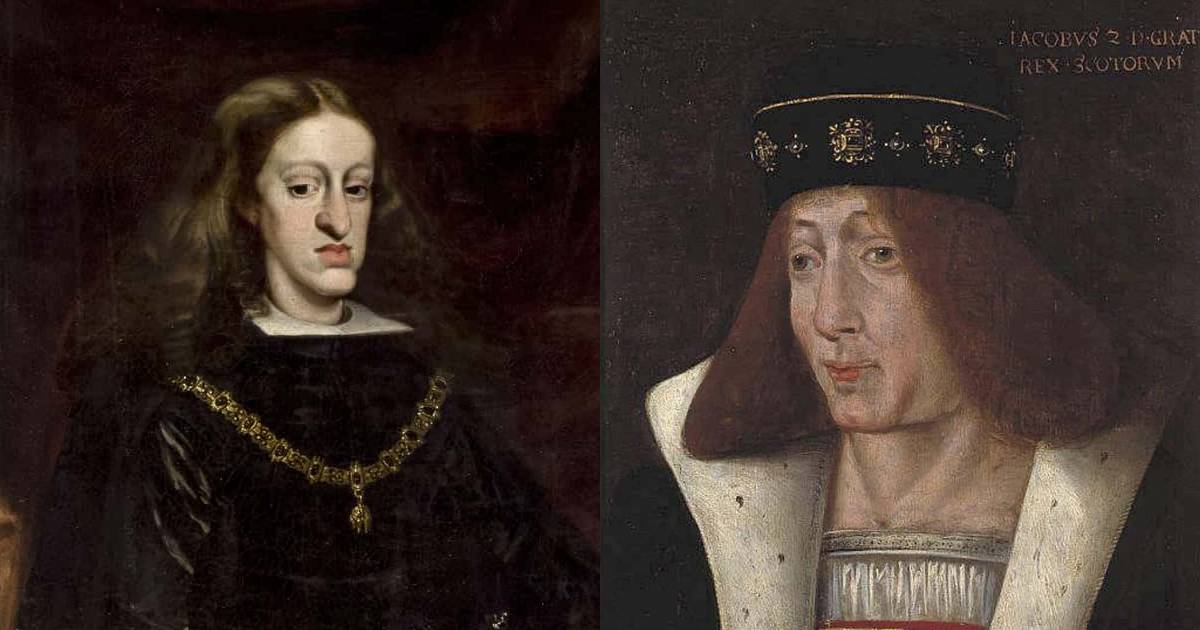 The Ugliest Royal Portraits of All Time

With a royal portrait like this early in life, it’s no wonder King James I of England turned into a woman-hater- I mean witch hunter. That’s right. King James I did not just command the country with politics. He also controlled the masses in one of the most infamous witch hunts in history. King James I of England And VI of Scotland is primarily known for uniting the two crowns. But James’ royal obsession with black magic started Europe’s most brutal witch hunts. In the 1590s, King James VI of Scotland’s fear of witchcraft began stirring up national panics, resulting in the torture and end of thousands of lives. According to History Collection writer and historian, Natasha Sheldon, “Scotland was one of the most active areas to persecute witchcraft between the fifteenth and eighteenth centuries. Over this period, it is estimated that around 4,000 people were burnt at the stake. However, the most ardent persecutions occurred during the late sixteenth and early seventeenth century. During this period, any witchcraft- whether it was of good or evil intent became unacceptable. A witch was a witch; bound by a pact to act as an agent of the devil – even if they were using their magic to heal rather than harm.”

In 1597, King James VI of Scotland published a compendium on witchcraft lore called Daemonologie. It was also published in England in 1603 when James acceded to the English throne. The main focus of historians when interpreting Daemonologie has — rightly — been on its attitude towards (and justification of) persecution of witches, which James explicitly endorses not just as justified but as an obligation of all good Christians and rulers. One analysis sums up what Daemonologie truly was: “Although modern readers may assume that any work which focuses on witches, demons, and evil spirits must be of little intellectual value, two things have to be understood. Firstly, that discussions of demons were viewed as a part of legitimate scientific discussion at the time, as God acted through nature and as such spirits could use the natural world as a vehicle for machinations good or evil. Secondly, that Daemonologie is as much a political treatise as a religious/theological one.”

You May Interested: 10 Greek and Roman Trials for Magic and Witchcraft.

Another famous Elizabeth, Another Ugly Portrait

Few women in the world have been depicted as often as the current Queen of England, Elizabeth II. And unfortunately, she hasn’t fared particularly well in the ugly portrait department either. In 2000, the long-reigning monarch agreed to be painted by the late Lucian Freud, a British painter who throughout his career has earned wide respect both at home and abroad. This particular painter is extremely talented – that is worth noting here. So, in reality, the painting itself is not that bad. But something about the lighting and the fact that it took over a year and a half to produce this 9″ by 6″ portrait doesn’t sit right with us. While this masterful painter should not be discredited, this was not a flattering portrait of Elizabeth II. She sat for this portrait on various occasions between May 2000 and December 2001.

It’s worth stressing here that just because it’s unflattering doesn’t necessarily make it a terrible portrait. Lucian Freud is ranked among Britain’s finest figurative painters. It might not be flattering, but it certainly captures the weariness that must come with the amount of experience Elizabeth has had during her decades in office. Praise was forthcoming from The Times‘ art critic Richard Cork, who described the finished piece as, “painful, brave, honest, stoical and above all clear-sighted.” The Sun and its traditionally monarchical readership gave it an ice-cold reception, however; its Royal Photographer, Arthur Edwards, calling for pitchforks at dawn in writing, “Freud should be locked in the Tower for this.” Having said that, The Sun is mainly famous for its topless “Page Three Girls”, so let’s hold judgment on what they have to say shall we.

A Strange Little Man (aka King Frederik VII of Denmark)

Frederick VII (Frederik Carl Christian; 6 October 1808 – 15 November 1863) was King of Denmark from 1848 to 1863. He was the last Danish monarch of the older Royal branch of the House of Oldenburg and the last king of Denmark to rule as an absolute monarch. But… that doesn’t mean he was that dedicated to ruling. As a Crown Prince, Frederik lived a debauched life, which contributed to the discussions concerning the abolishment of the absolute monarchy. The year after his succession Denmark became a constitutional monarchy with the King’s signing of the Constitution on the 5th June 1849. His reign was marked by the national confrontation in Schleswig-Holstein, at which the King became a national symbol of unity.

Frederik VII was unstable by nature, but his unpretentious style won him many supporters. His marriage to Louise Rasmussen was the cause of great opposition in bourgeois circles, but the couple were popular with the rural population. However, it seems that the marriage would not have been terribly worth the drama. They were reported to have a very unhappy marriage. This would not be a majorly concerning issue if it were not for the fact that they also were unable to conceive a child – which royals are nuts about. Frederik’s drinking habits and affairs led to unrest in the relationship, ultimately resulting in divorce in 1837. He was the last Danish monarch of the older Royal branch of the House of Oldenburg and also the last king of Denmark to rule as an absolute monarch. During his reign, he signed a constitution that established a Danish parliament and made the country a constitutional monarchy.

Through the years, Prince Philip, Duke of Edinburgh has not been the most… liked monarch. It could be argued that the royals of today are under more scrutiny than ever due to the debated necessity of their roles entirely. They’re basically symbolic figureheads at this point. But they also have a harder time winning public opinion due to social media, news media, and television. His character depiction in The Crown was not particularly flattering. Pairing those factors along with the circulating rumors of his involvement in particularly unsavory crimes – it’s no wonder he was bound to rack up a bad portrait. In 2004 Stuart Pearson Wright was given the green light by Prince Philip, the Duke of Edinburgh, to do his royal portrait. The Duke declined an invitation to model at the artist’s studio, an old sausage factory in east London. Instead, he insisted that Stuart came to Buckingham palace for four one-hour sessions.

The title of the resulting work is Homo sapiens, Lepidium sativum and Calliphora vomitoria, which is essentially a pretentious Latin translation of “a wise man, some cress, and a bluebottle”. It does exactly what it says on the tin. The bluebottle might seem completely random, and to a large extent it is. But it does derive from the Vanitas tradition in art, which interpolates a worm-eaten apple or falling rose or something similar to tie us to nature and remind us that all flesh is grass. The cress, according to the artist, is a reference to the Prince as seed-bearer to the royal family (good luck trying to get that image out of your head). And then there’s the chest hair. No, it’s not Philip’s torso. It belongs to an anonymous, elderly gentleman who lives in London’s Bethnal Green. Apparently, he was rather startled that his chest had ended up superimposed on the Duke of Edinburgh, but also quite flattered.

Queen Caroline was actually a rather odd bird. She was known as unattractive and tactless during her life. According to accounts, she also rarely changed her undergarments… so add stinky to the list of unattractive attributes to Queen Caroline. It was due to her wealth that George IV, Prince of Wales, decided to settle down with her. He had accumulated a steep debt and so turned to marriage to solve his issues. Specifically, marriage to a rich woman. George, also known as “Prinny” settled his sights on the undesirable Caroline. On their wedding night, he was so drunk that he collapsed into the bedroom grate and remained there until dawn. Nevertheless, their only child Princess Charlotte was conceived, so he obviously managed to do what was required of him by his country.

Prinny found Caroline so disgusting that he refused to live with her and a year after their wedding he sent her a note tactfully informing her that she could do as she liked, as he would not be having ‘relations’ with her again. Caroline took this to mean that she could do as she wished. Rejected by her husband she went to live at Blackheath, London where her behavior became more than a little extreme. In her room, she had a clockwork Chinese figure that performed for… pleasure when wound-up. She also was given to dancing around in front of her guests in a manner that was most indelicate, exposing most of her body. Obviously, not a desirable quality for a lady and wife to the Prince of Wales. After many more crazy stories in her life, when George IV was coronated, she was barred from the Abbey… After proclaiming she was “The Queen…Open” and the pages opened the door. “I am the Queen of England,” she shouted and an official roared at the pages “Do your duty… shut the door” and the door was slammed in her face. Unfortunately, the undignified lady demanded a coronation for herself the next Monday. Which was not granted. And she met her end 19 days later.

This Trippy Collage of the Danish Royal Family

In 2013, the first portrait of the Danish Royal Family in 125 years was unveiled. But nobody expected this slightly disturbing painting. Critics went back and forth, saying it looked like a mix between a horror film advertisement and a botched Photoshop attempt. Disappointing news for the artist, Thomas Kluge, who spent four years painting Queen Margrethe and her family. But this honestly doesn’t even look like a painting. The portrait evoked an earlier piece; the last portrait of the Danish Royal Family, set in the hall of Fredensborg Palace in the mid-nineteenth century. But despite the stylistic similarities between the two—not least their realism/hyper-realism—the artist never intended for it. “I was trying to take out realistic depictions because we live in a democratic world and I think our Queen and her family are now symbolic,” Kluge explained. “This is satire.”

Well, at least we can all agree there’s little realistic about the setting. The family float in purgatorial darkness before a crumbling, century-old backdrop of the former palace. It’s the stuff of nightmares, particularly with Princess Isabella (far left) clutching a doll and doing her best demon face. At least the sittings were more fun-filled with the artist playing football with Prince Christian between sessions. Still, at least the Danish Royal Family isn’t as picky as the British. Queen Margrethe at least accepted the work (though without publically commenting as to whether she liked it or not). And Margrethe knows a thing or two about art. As well as being a full-time monarch, she’s a part-time painter: the illustrator for the Danish edition of JRR Tolkein’s “Lord of the Rings” series and a painter in her own right, with a recent exhibition in Denmark’s Museum of National Art.

Number One London – The Life & Death of Queen Caroline