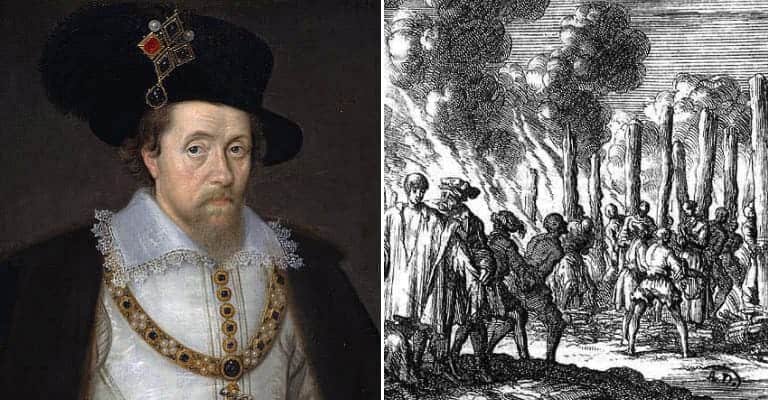 Scotland was one of the most active areas to persecute witchcraft between the fifteenth and eighteenth centuries. Over this period, it is estimated that that around 4,000 people were burnt at the stake. However, the most ardent persecutions occurred during the late sixteenth and early seventeenth century. During this period, any witchcraft- whether it was of good or evil intent became unacceptable. A witch was a witch; bound by a pact to act as an agent of the devil – even if they were using their magic to heal rather than harm.

Before long, this hardened attitude to witchcraft had spread south to England. This change in perspective- and its spread- can be attributed one man: James VI of Scotland, later James I of England. In 1589, a stay in Denmark led to James’s conviction that witchcraft was real. This sojourn abroad- and the King’s journey home marked the beginning of a long obsession which saw James becoming the Witchfinder King as he took an active interest in rooting out witches- even writing a manual on the subject that was used by Matthew Hopkins, the self-styled Witchfinder general. However, the paranoia and superstition that inspired James’s fear of witchcraft began before Denmark and can be traced back to James’s early youth.

Igniting Superstition: Mary Queen of Scots Death and a Visit to Denmark

James VI became King of Scotland in 1567 while he was still a baby. His mother, Mary Queen of Scots, had been forced to abdicate the throne, so while a succession of regents ruled Scotland, tutors reared the infant King. Chief amongst these was George Buchanan, a strict Presbyterian. Buchanan aimed to ensure that his royal charge had no truck with Catholic superstitions. He was partially successful. For James grew up to be a staunch Protestant. However, while the young King was also learned and intelligent, he also possessed with a distinctly superstitious streak.

This superstitious tendency manifested itself at the time of the death of James’s mother, Mary Queen of Scots. At this time, James was 21 and had been ruling Scotland independently for six years. Many years later, James told Sir John Harington, one of his trusted nobles at the English court about how he believed Mary’s death had been ‘foreshadowed” at this time. “His Highness told me her death was visible in Scotland before it did really happen,” said Harington, “being, as he said, spoken of in secret by those whose power of sight presented to them a bloody head dancing in the air. He then did remark much on this gift and said he had sought out of certain books a sure way of attaining knowledge of future chances.”

So, James’s superstitious nature might have provided fertile ground in which a fear of witchcraft might grow. However, the seeds of that fear did not originate in Scotland. For Buchanan and other protestant intellectuals of the time may have been staunchly anti-catholic, but for them, witchcraft was not a problem. Instead, James’s witchcraft issues began to blossom during a trip to Denmark in 1589. That August, James had been married by proxy to Anne of Denmark. However, when the Princess attempted to set sail for Scotland to formalize her marriage, she found herself driven back to shore by violent storms. So, James decided not to wait for his bride to come to him and instead set sail for Denmark.

The couple remained in Denmark until May 1590. During that time, James met many intellectuals and philosophers of the Danish Court. What the Scottish King learned gave him much food for thought. For James became aware that belief in witchcraft was widespread in Denmark. The Danish firmly believed that all witches were in league with the devil and that their powers came from a demonic pact. Witches were regarded as a social scourge and widely hunted. Crucially, however, James learned that the court believed the storms that had prevented his new wife crossing the sea to Scotland were the work of witches.

So, with these thoughts fermenting at the back of his mind, James embarked on the voyage back to Scotland with his new bride. While the royal fleet was at sea, violent storms suddenly blew up. The storm battered the Scottish fleet, and one ship was lost. Shaken by what had happened and troubled by the ideas seeded in his head during his stay in Denmark, James grew convinced that witches were at work- not just in Denmark but in Scotland too.

The North Berwick Witch Trials, The Daemonolgie and a change in the law.

Spurred on by his newfound conviction, in 1590, James instigated a widespread purge of witches. He began by rooting out the witches in Scotland he believed to be responsible for the potentially fatal May storms that he was convinced were part of a wide scale plot to end his life. In all, between 70 and 100 ‘witches’ from the Scottish coastal town of North Berwick were rounded up and accused of using their devilish arts to attempt to kill the King and his new wife.

Most of the suspect’s confessed- under torture. Some admitted to trying to kill the king using a wax effigy. Others claimed to have whipped up the infamous storm by casting spells using bizarre items such as male genitalia and severed limbs- and a dead cat and offering them to the sea. Satan himself had also joined in the fun when the witches summoned him to their aid during a black mass in North Berwick Churchyard. The witches were swiftly executed- and James left his subjects in no doubt that witches were in their midst by circulating details of the trials throughout the country in a pamphlet, Newes from Scotland.

Even though witchcraft was already a criminal offense in Scotland, the law having outlawed it in 1563, the North Berwick trials were unique. For the authorities did not often pursue witches. James fervently believed this had to change. So, in 1590, he tightened up the witchcraft law- and did his best to ensure that the courts followed it through. Now any dabbling with magic, whether black or white could bring an individual to the fire.

In 1591, James followed one trial with particular interest. Mary Napier’s trial was unique because the court accused her of consulting a witch with treasonable intent- not being a witch herself. James was determined she should die. So when Napier claimed to be pregnant, the King told the court to find out if she was indeed pregnant- and if not, burn her. The King’s disappointment was deep, however when the court acquitted Napier of the charges, pregnant or not.

These trials and executions, however, had warmed James up nicely for his subject. So he moved on to a full-scale book. In 1597, James published his Daemonologie or “the Science of Demons.” In doing so, he became the only monarch in history to publish a book about witches- and how to find them. The eighty-page book was the result of seven years of painstaking research. Like the medieval Malleus Maleficarum, theDaemonologie was designed to convince readers of the genuine danger of witches- as well as equip them with the knowledge to root them out.

The book became the main point of reference for Matthew Hopkins, the witchfinder general. In the meantime, it equipped Scottish witchfinders with the wherewithal to carry out the king’s will. By the time James left Scotland to take up the throne of England, half the Scottish witches arrested were being convicted – and burnt.

England, Shakespeare and The Witches of Leicester

On his arrival in England in 1603, James found himself king of a country of skeptics. Although witchcraft was on the statute books, the numbers of trials had been steadily declining during the reign of Elizabeth I. James immediately set about remedying this. Daemonologie was reprinted twice and in 1604the law was tightened to mirror that in Scotland. Hanging now became mandatory for the crime. The result was a pleasing surge in paranoia. A rash of copycat pamphlets followed the Daemonologie’s republication. So did a spate of trials, the most famous being that of Lancashire’s Pendle witches in 1612.

The fact that his subjects were very well aware of what their new monarch’s pet subject was shows in many of the new and popular plays of the time. In 1604, Christopher Marlow’s The Tragic History of the Life and Death of Dr. Faustus, which was first performed in 1588, was re-released. Ben Johnson followed suit by writing his new witch play, The Masque of Queens. However, the most famous witchcraft play of the period was Shakespeare’s Macbeth, which drew on many of the motifs of witchcraft beloved to James- and had its inaugural performance in 1607 when Queen Anne’s brother, the King of Denmark came to visit.

However, as his reign in England progressed, James became a less fervent, more skeptical witchfinder. In 1616, the King was on royal progress about the country when his interest was piqued by a provincial witchcraft case in the town of Leicester. At its center was a 12-year-old boy, John Smythe from Husbands Bosworth, a Leicestershire village. The child had accused a group of women of bewitching him. Nine women were arrested and brought to trial at the Leicester assizes.

Town officials told the fascinated King how during the court case, John Smythe had given ample evidence of the ‘strange fits’induced by the witch’s craft. While possessed by the witch’s familiar animal spirits, he produced the exact noises of the animal in question, barking, meowing or clucking as appropriate. The court also witnessed how he became so strong that two men could not hold him and that he could”strike himself such blows on his breast…that you might hear the sound of it the length of the chamber….and yet all he did to himself did him no hurt.”

This evidence convinced the judges, and the women were found guilty and hung. Having heard the particulars of the case, and having so narrowly escaped the wiles of witches himself, James was eager to meet a fellow survivor. So he asked to meet John Smythe so he could question him about his experience. The boy was presented to the king. However, the experience of meeting his monarch must have been overwhelming -because Smythe immediately broke down and admitted he had made the whole story up. Quite inadvertently, the witchfinder king had exonerated the Leicester witches-albeit too late to save their lives.

Where Do We Get this Stuff? Here are our Sources?