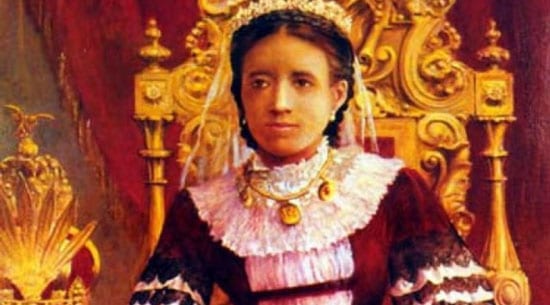 Ranavalona I of Madagascar

Ranavalona I of Madagascar, called Ranavalona the Cruel or the Mad Queen of Madagascar, came to power in 1828. Raised in poverty, Ranavalona was adopted by the king, and married to his oldest son, as the first of twelve wives, after her father discovered a plot to murder the king. While Ranavalona’s children were the rightful heirs, she bore no children during her marriage. The rightful heir was, therefore, the king’s nephew.

Her husband, Radama, died a horribly painful death, perhaps due to poisoning by Ranavalona, or due to syphillis. Following his death, she seized the palace and had the remaining members of the original royal family, including the heir to the throne, killed. Ranavalona herself was at significant risk during this time, making her actions logical, rather than mad. The traditions held that any of her children could become heir to the throne, even after the rightful king’s death. She held the palace and was crowned queen on June 12, 1829.

As queen, Ranavalona strongly opposed efforts at colonization, fending off the advances of both the British and the French in Madagascar. After one successful battle, the heads of Europeans killed were displayed on pikes as a symbol of her victory. Early in her reign, she created new industries in Madagascar to support the country’s independence. She was, during this stage, relatively well-liked, even after her actions opposing the traditional royal family, and her actions certainly benefited an independent Madagascar.

Later in life, Ranavalona became progressively more extreme in her actions; she actively persecuted any Christian elements in the country, resorting to both torture and execution. Several thousand Christians were persecuted during her reign, and most foreign missionaries fled. In addition, she relied upon forced marches through malaria-infested swamps to suppress any revolts among her troops.

She instituted a range of punishments and tests of loyalty that were, in some cases, impossible to pass. For instance, someone whose loyalty was in doubt, individuals were made to eat several chicken skins, and then vomit. If they did not vomit up all of the chicken skins immediately, they had been shown to be unfaithful to the queen.

Ranavalona was far from kind, but she was effective; she founded cities and retained the independence of Madagascar. In fact, Madagascar remained independent for some 30 years after Ranavalona’s death.