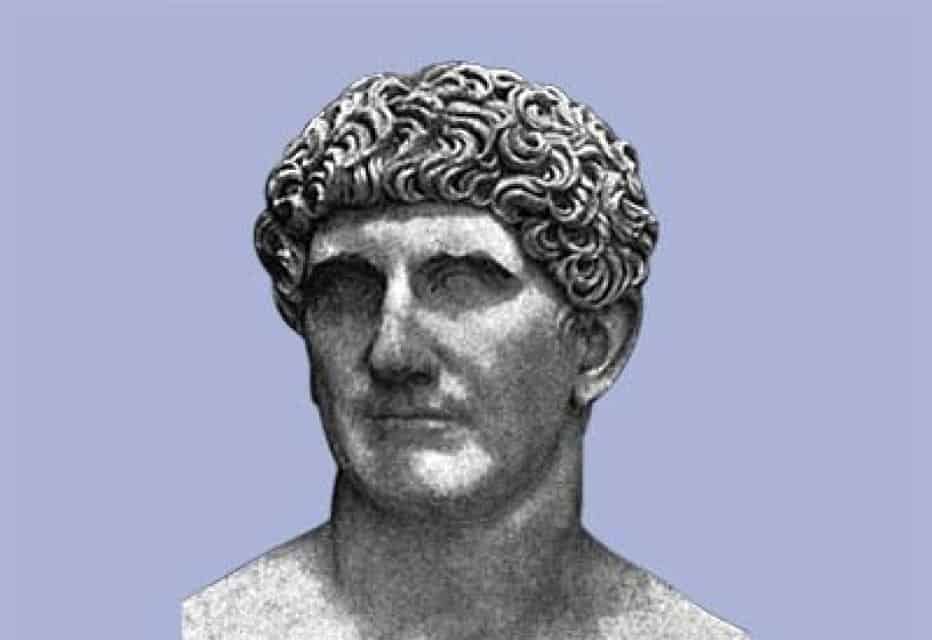 Cicero’s speeches denouncing Antony are among the most famous in Roman literature. It is clear that the great orator hated Antony, but it was probably a case of mutual loathing. When Antony’s father died, his mother married P. Cornelius Lentulus, who acted as a paternal figure, and the two apparently enjoyed a good relationship. Cicero ordered the execution of Lentulus for his role in the Cataline Affair in 63 BC. Clearly, this is something Antony never forgot, and Cicero ultimately paid for this deed, and his subsequent opposition, with his life. It is also worth noting that Cicero referred to Antony’s father as incompetent and corrupt and also wrote that his nemesis had a homosexual affair.

Cicero favored Pompey during the Civil War, but his support was apparently not too strong because Caesar forgave him upon his victory. Cicero returned to Rome after the Battle of Pharsalus in 48 BC upon receiving a pardon from Caesar, and he even wrote a letter to Varro in 46 BC where he outlined his strategy for working with Caesar. As a constitutionalist, Caesar’s dismantling of Roman politics and his subsequent role as dictator appalled Cicero. Nonetheless, he was shocked by the Ides of March and took no part in the conspiracy.

With Caesar dead, a struggle for power ensued, and Cicero saw Octavian as a man who could restore the Republic. Cicero accused Antony of taking liberties with Caesar’s wishes in his role as unofficial executor of his former leader’s will. In 44 and 43 BC, Cicero made a series of 14 speeches (called the Phillippicae) denouncing Antony. He made the first of these speeches on September 2, 44 BC where he criticized the legislation of Publius Cornelius Dolabella and his new enemy.

At this point, Cicero and Antony were the two most prominent political figures in Rome, and the orator’s public standing had never been higher. Cicero delivered the 14th Philippic on April 21, 43 BC and in it, he demanded that Antony be declared a ‘hostis’ or enemy of the state. Unfortunately for Cicero, Antony mended his relationship with Octavian and formed the Second Triumvirate with his new ally and Lepidus.

The new Triumvirate started proscribing their enemies, and Cicero was one of their prime targets. Although he still enjoyed public sympathy to the point where people refused to give away his whereabouts, Cicero’s luck came to an end on December 7, 43 BC when he was seen fleeing from his villa in Formiae; his goal was to escape to Macedonia.

According to legend, Cicero leaned over to help the soldiers chop his head off properly, and a man named Herennius killed him first and chopped his head off afterward. Antony ordered his men to cut Cicero’s hands off and, along with his head; they were nailed on the Rostra in the Forum Romanum. Cassius Dio claimed that Fulvia, Antony’s wife at the time, pulled out Cicero’s tongue and stabbed it with a hairpin.

Although not a great deal is known about Mark Antony’s personal life, most sources agree that he was a womanizer with a love of wine. In the HBO Series ‘Rome’, he is portrayed as a sex addict with alcoholic tendencies who was prone to murderous rages. The trouble is, history is written by the winners so in the wake of his defeat to Octavian, he was always likely to be thoroughly vilified by Roman literature and he most certainly is.

The main source for Antony’s personal life comes from Plutarch, and his account is pretty damning. According to Plutarch, Antony had a thirst for wine that bordered on alcoholism. While other texts appear to confirm that the commander did indeed enjoy his wine a little too much, most of the accounts of womanizing come from Plutarch who usually brings it up in the context of his drinking.

Perhaps the main reason why we associate Mark Antony with womanizing behavior is the idea that he went ‘all in’ with Cleopatra. The thing is, his primary reason for his relationship with the Egyptian queen was probably monetary gain. It is easy to paint him in a negative light by suggesting that he risked his reputation and life to cavort with a ‘foreigner.’ In reality, Cleopatra was one of the wealthiest people in the world, and it made sense to spend time with her to raise the military forces he needed to take on Octavian.

Mark Antony was apparently an exceptionally good-looking man; even Plutarch describes him as having a ‘bold and masculine look, which is found in the statues and portraits of Hercules.’ As a result, he was typically surrounded by beautiful women which means he might not have been fixated on Cleopatra’s alleged beauty; at least not initially (His actions at Actium suggest he had long since fallen hopelessly in love with Cleopatra). Incidentally, we have no idea what Antony looked like! Octavian ensured that there are no definitive images of his enemy and none of the busts attached to the commander are 100% attributed to him. It should be noted; the fact he had multiple wives does little to dissuade us from the idea that he was a womanizer.