Battle of Actium: The Death of Ptolemaic Egypt & Birth of Roman Empire 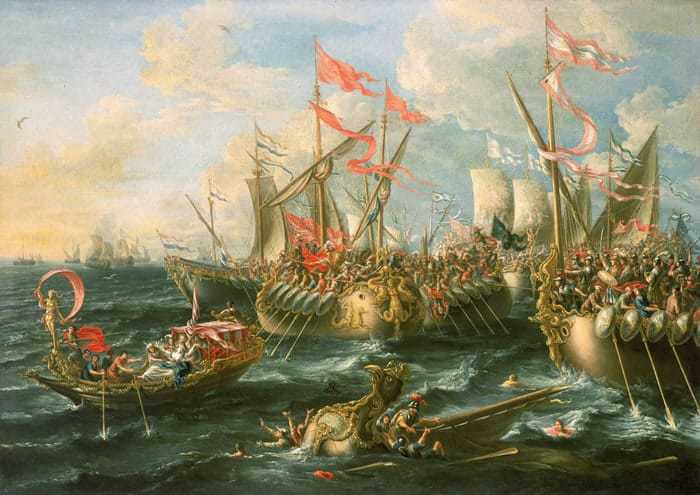 The Battle of Actium: Birth of an Empire

Not only is the Battle of Actium in 31 BC among the most crucial battles of the ancient world, but it is also arguably one of the most important of all time. It was the significant conflict in the war between Octavian and Mark Antony; the former was victorious and became the first Emperor of Rome in 27 BC. It was the beginning of an empire that lasted over 500 years in the West and almost 1,500 in the East.

When Julius Caesar was assassinated in 44 BC, a brutal civil war ensued. Cassius and Brutus, chief conspirators in the murder of Caesar, led one faction. Mark Antony, lieutenant of Caesar, and Octavian, Caesar’s adopted son and heir led the other. The Caesarians won the day with a decisive victory at Philippi in 42 BC. The winners divided the empire; Mark Antony took the West, Octavian the East while Lepidus, the other member of the Second Triumvirate, went to Africa.

Although they fought together against a common foe, Octavian and Mark Antony always had strained relations. Octavian married off his sister, Octavia, to his co-power wielder in 40 BC but the womanizing general fell for the charms of Egyptian Queen Cleopatra just like Caesar before him. By 37 BC, Mark Antony left Octavia and traveled to Syria to live with his Egyptian heiress who had already bore him twins (a boy and a girl). He apparently married Cleopatra, which broke Roman rules regarding marriage with foreigners.

It was also alleged that he offered her Roman land which was tantamount to treason. Octavian, outraged by his rival’s treatment of his sister and seeming disregard for the Roman law, prepared for war.

Changing the Course of History

Octavian had probably been anticipating war for some time and was well prepared. In 31 BC, his general Agrippa captured the Greek town of Methone which was an ally of Antony. Agrippa sailed with 300 war galleys and took up strategic positions in the western Peloponnese with the goal of cutting off his foe’s lines of communication and supply. It was a successful mission as Antony found it difficult to supply his huge army properly. Also, Octavian established a bridgehead at Ambracia with 120,000 men.

Antony was also well prepared; he spent the winter of 32 BC in Ephesus with Cleopatra and boasted an army of 115,000 men, 230 warships, and 50,000 sailors. He initially wanted to cross into Italy, but Octavian halted him by landing at Dalmatia with 100 ships. Antony marched to the Gulf of Ambracia in the hope that Octavian would meet him in battle but was disappointed as his rival refused to engage. It was a wise move by Octavian as Antony was the far better commander.

By cutting off Antony’s supplies, Octavian gained control of the situation. As Antony’s men began to grow weak with hunger, he knew it was necessary to break out of Ambracia. However, this meant a battle at sea which suited Octavian because he could rely on the services of Agrippa who was a superb admiral. In contrast, Antony’s abilities were mainly confined to land battles as he never showed capability in a sea battle. On September 2, 31 BC, the Battle of Actium, a fight that changed the world, took place in the Ionian Sea.

It was a short battle given the high stakes. Antony was at a disadvantage from the start because his heavy quinqueremes were built for ramming and lacked maneuverability. Also, his ships were undermanned because a significant proportion of his men succumbed to a malaria outbreak when they were penned in at Ambracia. In contrast, Octavian’s men were fresh and healthy, and the fast and light ships were perfect for an open sea battle.

To add to Antony’s woes, one of his generals, Quintus Dellius, defected to Octavian with his former leader’s battle plans before the conflict. After midday, Antony had to engage in battle and hoped to drive back the enemy. However, Octavian stayed out of range, so his enemy had to attack. The battle raged on for a couple of hours without any major developments. Meanwhile, Cleopatra’s fleet remained in the rear and did not fight. As soon as a breeze blew in the right direction, the Egyptian ships took advantage and sailed away from the battle.

Antony believed it was a sign of panic and followed Cleopatra’s 60 ships with 40 of his own. His fleet quickly fell apart without its leader and in the belief that all was lost. Antony left behind an estimated 300 ships and around 5,000 men. Octavian’s fleet quickly gained control and annihilated the enemy.

Some historians suggest that Antony knew he was surrounded with nowhere to go. As a result, he tried to keep his heavy ships close to the shore in the knowledge that if Octavian’s ships approached, Antony’s fleet would be pushed towards the sand where they would presumably disembark and flee. He did this because he didn’t believe his fleet was strong enough to defeat the enemy. Antony spread out his ships to weaken Octavian’s center. Eventually, his enemy’s middle was vulnerable enough to penetrate, and Antony seized the opportunity by sailing through it with Cleopatra.

After the Battle of Actium, Antony’s legionnaires surrendered, so there was no chance of him winning the war. Octavian chased his enemies to Egypt, and although he lost the Battle of Alexandria in July 30 BC, it was not enough to prevent more of Antony’s men deserting. Although he no longer had enough of an army to beat Octavian, Antony made the mistake of launching a major attack to try and end the conflict.

It was a complete failure, and Octavian took the city of Alexandria in August. Antony was falsely informed that Cleopatra was dead, so he committed suicide. As he lay on the floor in the throes of death, a messenger arrived to tell him that his lover was alive. Antony apparently died in her arms, and after a failed attempt to seduce Octavian, Cleopatra also committed suicide by apparently allowing a poisonous asp to bite her. Octavian executed Caesarion, Cleopatra’s son, added Egypt to the Roman territories and became Emperor Augustus in 27 BC.