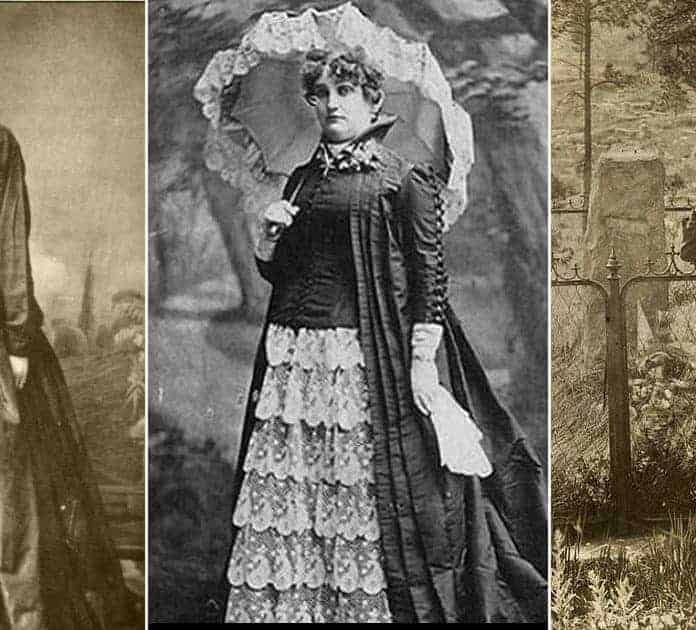 They have been called by various euphemisms in film, novels, television shows, and songs. Saloon girls, soiled doves, ladies of the evening, and many other names have been used to describe practitioners of what is known as the oldest profession: prostitution. In the west they were found in bordellos, brothels, houses of ill repute, opium dens, hotels, tents, and saloons. Many fictional characters have been created around their profession; Belle Watling in Margaret Mitchell’s Gone With the Wind, Kitty Russell on the long running radio and television program Gunsmoke are two examples. Both of these characters were presented as being good-hearted, strong women of character and moral standards despite their chosen professions.

Throughout the American West, and in the eastern cities which were contemporaneous with the heyday of the American West from 1865 -1900, prostitution was big business. Some women made fortunes and retired wealthy, although kept at arm’s length by ladies of society. Some became famous as a result of the company they kept, either famous criminals or lawmen in a society where the difference between the two was sometimes hard to distinguish. Some became the basis of fictional characters in later works, and some became famous from other activities in addition to their occasional forays into prostitution made necessary by prevailing economic conditions.

Here are some of the more famous and infamous professional women of the American west, and some of their customers and companions.

Fannie Porter was born in England and by 1888 she was living in San Antonio, Texas where she began working as a prostitute that year at the age of fifteen. After five years she had saved enough money to open her own brothel at the corner of Durango and San Saba streets, an area which became famous as the San Antonio Sporting District. The sport presented in the Sporting District was mostly gambling, drinking, and prostitution, with numerous brothels and other houses which offered all three.

Fannie’s establishment developed a reputation for fair prices, attractive women, and honest dealing at the card tables. One of her girls, Della Moore, became a particular favorite of Kid Curry, who often rode with the gang known as the Wild Bunch, led by Butch Cassidy and Harry Longabaugh, better known as the Sundance Kid.

Besides catering to many known outlaws, some of whom used her establishment to pass along money stolen during their various crimes, Fannie Porter was also well known for catering to lawmen. There was no national law enforcement apparatus at the time, the closest thing to it being the privately owned and operated Pinkerton National Detective Agency, whose operatives were frequent guests of Porter’s house.

Fannie was well known among the outlaws for her discretion in keeping their presence in the house quiet even when Pinkertons or other law enforcement were on the premises. By extension, the customers on the right side of the law did not press her or her girls for information.

The San Antonio Sporting District continued to operate through World War I (even publishing a Blue Book of attractions for tourists), but went into a gradual decline which culminated in its being shut down as America began to mobilize for World War II. By then Fannie had retired. A local legend has it that she was killed in a car accident between 1937 and 1940, although whether such occurred is far from certain.